MONUMENTAL, MAGNIFICENT "AGE OF EMPIRES" AT THE MET 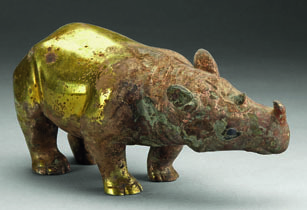 My only excuse for not reviewing this grand show sooner (and it’s a pretty feeble one) is that last December, I posted a review of a related show, at the China Institute Gallery, of work from the era that directly succeeded the Han Dynasty, “Art in a Time of Chaos: Masterworks from Six Dynasties China, 3rd – 6th Centuries.” That show was a charmer, and I wanted to put some space between the two reviews, but this new show is so much bigger and grander than the other that in many ways there is just no comparison.

This exhibition was organized by Dr. Zhixin Jason Sun, curator of Chinese art at the Met, assisted by Pengliang Lu, curatorial fellow there. But all of the 160-plus works in the show, including ceramics, metalwork, textiles, sculpture, painting, calligraphy and architectural models, are drawn exclusively from 32 museums and archaeological institutions in the People’s Republic of China, and a majority of these works has never been seen before in the West

The period covered by “Age of Empires” is contemporaneous with the late Greek and earlier Roman civilizations of the Mediterranean, and resembles the art of these Western periods in its noble simplicity and calm grandeur, but beyond that, it becomes something new and rich and wonderful and strange.

Most of the many objects in this show come from tombs, as the Chinese, like the ancient Egyptians, believed in an afterlife, and prepared all manner of objects to accompany their deceased rulers and high-ranking members of society into that afterlife.

Leading off the show is the most spectacular part of it, displaying an imposing array of larger-than-life earthenware figures. Lined up together are an armored infantryman, an armored archer, a civil official, a general and a pony-sized horse—all from the tomb of the first Qin emperor (d. 210 BC). They are part of an army of 7,000 unearthed together—as is the crouching archer in a separate case across from this lineup.

Emphasizing the warlike nature of this display, between these big figures are two half-life sized modern replicas of quadrigas (four horses apiece, each pulling a chariot), and in adjoining cases are weapons (swords and a replica of a cross-bow). Impressive.

A little too impressive, in fact. These huge military people, with their haughty, even arrogant expressions, are all very handsome figures. However, with headlines from Syria and North Korea suggesting that our own volatile leader could unwittingly set off another conflagration, I felt vaguely uncomfortable at being reminded of the militaristic past of a proud and mighty country that would undoubtedly be on the other side in any such conflict.

I wish I were not troubled by these thoughts, but even art is tinged with politics these days.

Fortunately, the rest of “Age of Empire” is more peaceable, even if not quite so grandiose. After displays demonstrating the technological mastery of these early dynasties (with currency, standardized weights and measures, and a water clock) we come to the Han Dynasty part of the show, to be greeted by a gallery with more statues of horses.

And this is another passion of mine. I love horses, and here we have some sensational ones. One display has a memorable group of four spirited black-lacquered and almost-stylized ones, good-sized but not overwhelming, and kept in place by riders.

Joining them on the same pedestal is a large bronze equine, richly clad in an icy green patina, led by a groom and exuding a princely élan, from his jauntily cocked tail to his upright head and flaring nostrils. According to the label, horses like this were known as “heavenly horses,” and imported from an ancient kingdom in what is now Uzbekistan.

Moving on, we come to a gallery with statues of graceful women dancers, plus one playing a Chinese form of a zither. I’ve seen similar figures before and always been enchanted by their flow & vigor, and by the economy of means that their unknown creators employed to render them. This presentation was no exception.

Along about here, as there are elsewhere, we have large, robust pots and delicate fragments of fabric, intriguing because of their great age but not as memorable as the statuary.

Following this, we have a whole gallery with a sign reading “Menageries in Miniature.” It contains all manner of little statues of animals in a series of separate vitrines. This for me is the high point of the show, though the show itself continues on for a good while after it.

In the last part of the show, we have a couple of provocative tours de force, both sculptural: an elegant bronze “money tree” with a dazzling display of what looks more like intricate snowflakes dangling from every branch, and a lamp with 16 branches, likewise elaborately ornamented.

There are architectural models of small buildings for the afterlife, and a burial suit for a Han princess made of more than 2,000 little flat jade pieces—spectacular from an archeological point of view, less rewarding from a purely esthetic one.

But oh, those little animals in “Menageries in Miniature”! What a joy they are! Often displayed in twosomes, there are goats, an elephant, a bear, “bovines,” chickens, pigs, more horses, and dogs—especially one in a case by itself,

This one is labeled, “Dog – Eastern Han Dynasty (AD 25 -220) Unearthed in 1987, Dongguan, Nanyang, Henan Province, Henan Museum, Zhengzhou.” Said to be warding off evil spirits, he has a squared-off, ornate open mouth and is happily barking up a storm

Scarcely less appealing is the miniature rhinoceros that illustrates this review, a bronze icon glamorously gilded and obviously based on a living model, though rhinoceroses were not native to China, and had to be imported for the emperor’s private zoo.

All the little animals and the musicians and the dancing figures are what originally endeared the Han dynasty to me, and I was so happy to see more of them here. If ever there were objects to cheer a soul’s journey into the Great Unknown, these are they.