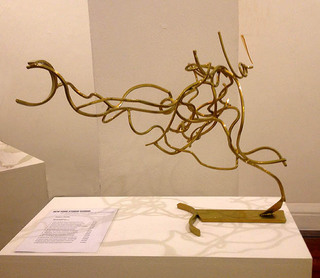 James Wolfe. "Leaphorn," 2014. Powder Coated Steel, 22 x 28 x 18 inches. Courtesy the artist.
As I said in my last post, I remember James Wolfe (b. 1944) from the late 80s, when his sculptures were exhibited at André Emmerich. In 1990, when I was preparing to go out to teach at Bethany College in West Virginia, George Hofmann sent me a copy of Sculpture magazine with an article in it by Karen Wilkin about the group of sculptures that Wolfe had recently made as part of a project for Bethlehem Steel at their giant steelworks in Johnstown PA.

After I started teaching at Bethany, I took my sculpture classes on day trips to Johnstown. It made a fascinating visit—and not only because Wolfe’s sculptures looked so terrific in the “sculpture park” surrounding the little funicular railway that went from the main town of Johnstown, in a deep valley cut by the Conemaugh River, to the suburb of Westmont, high above that valley. Westmont was where all the rich people lived, and why they escaped drowning when the river flooded in 1886, killing more than 2,000 people. The river flooded again, though with lesser loss of life, in 1936 and as recently as 1977.

At the top of the funicular was (and I trust, still is) a little museum, with a diorama showing how Johnstown looked in 1886. From the adjoining balcony, you can lean over a railing, look down into the valley, and see how dreadfully vulnerable the city is. By the time we visited it, though, the mills had closed and most of the young people were looking elsewhere for work. The representative from Cambria County who showed us around also took us to the cemetery where 777 unidentified victims of the 1886 flood are buried, in little identical but anonymous graves.

Meanwhile, James Wolfe had emigrated to Los Angeles, and for the next couple of decades, exhibited primarily on the West Coast. Now he is back east, and based in Northport ME. California’s loss is the East Coast’s gain, for Wolfe’s new sculptures are, if anything, even more dashingly elegant than they were. With their twists and curls and flaring extrusions, they are full of life.

Fourteen of Wolfe's new sculptures are currently displayed at the New York Studio School on West Eighth Street (through August 10) All fourteen are built out of steel, and all but two are powder coated—a technique that lends them a shiny, brightly-colored finish (two are simply “oiled steel” and look a semi-gloss brown).

Six are large, measuring up to 9 ½ feet in height; the remaining eight are small to medium-sized, the smallest being something less than 2 feet square. Their central element is flat strips of steel maybe 2½ inches wide and maybe ¼ inch thick. These ripple and flow like so many fabric ribbons, demonstrating by their fluidity the command that the artist has over his medium, and emphasizing their liveliness.

To add variety and embellish these ribbons (or sometimes to replace them) are longer & vigorously twisted, narrower strings or rods; these are maybe ½-inch square in cross-section. Finally, there are broader and shorter swaths, 3- to 5-inches wide and rarely more than a foot in length.

Occasionally, more identifiable elements are added; being recognizable from other contexts, they play the more familiar role of found objects—but they are at a minimum.

I really liked the installation of the show, which was directed by Wilkin. If you follow the numbers in the checklist (and on tiny pins next to each work), you will first encounter two small pieces. One, “Inside Out,” is on the wall right in the entryway, over the shelf with the guest book, catalogues for sale & checklists. Small & a deep shiny red, it’s composed of a kind of latticework surrounding curlicued strips and whirling rods--superbly tight and balanced.

Stepping inside the front gallery and turning left (clockwise), you come to “Wicket Scoop,” another shiny red & smallish work, but freestanding on a pedestal, and mostly composed of three successive arches made of those strips, moving from modest (in front) to magniloquent (at the back) .

This is one of several works in the show with “wicket” in their titles, because of their resemblance to croquet (not cricket) wickets. As I didn’t look at the checklist until I’d studied the works themselves, I was free to make my own associations with these shapes (This is in line with my principles of multireferential imagery, which argue that an abstract work can convey many different likenesses from the artist’s unconscious at one and the same time, without the artist intending it to, or even recognizing them).

To me, “Wicket Scoop” therefore looked like a broad, inviting & elaborate miniature entryway--to a house or maybe a nightclub or a ride at Coney Island (though I daresay that saying “a ride at Disneyland” would make me sound less like a fossil). Elaborate, that is, but also classically simple.

Following the numerals on the wall into the next gallery, I first encountered “Leaphorn,” also on a little pedestal and colored a marvelously greenish gold. This quite small sculpture is almost all composed of those narrow rods or fillets, triumphantly twisted into a mare’s nest of circlets and ovals and squiggles or whatnot—though all perched on one diagonal shaft leading down to its stand.

The title would suggest that the artist thought his work (after it was finished) resembled a horned mountain goat perched to jump from a rock, but (not having looked at the checklist) it reminded me very forcibly of those “bird” sculptures by David Smith (I’m thinking here especially of the “Royal Bird” of 1947-48). And the way in which Wolfe has signed his name on the base of the statue is also very like Smith’s way of signing his work.

Can this possibly also be intended as an hommage to Smith? It wouldn’t surprise me, but it doesn’t bother me, either, because the nest of interwoven rods, with so many open spaces inside of it, is so much more ethereal than the Smith bird. The two look alike and yet distinctively different –a real tour de force.

Number 4, screwed to the wall and hung slightly above eye level, is “Expanded Metal Wicket.” It’s bright yellow and quite large and its arched shape this time reminded me of a grille of a classic automobile or the yoke of a horse or ox. I didn’t respond to it as powerfully as I had to Nos. 1, 2 & 3, but I thought it was handsome and well-done.

Nor do I have much of a mental image surviving from No. 5, though I know I liked it a lot, as I’ve given it three stars in my notes. Its name is “T Time,” and it’s copper-colored, medium-sized, and employs those mare’s nests of squiggly narrow rods to build its central image, then adds the broader ribbons of steel to provide accents and contrast.

No. 6, “Spread Wicket,” is one of the six large sculptures in this show, as well as one of two finished solely with oil, and therefore not shiny or brightly colored, but plain brown. I may as well say right here that I thought it the most successful of the six large ones, possibly because it’s the simplest. There’s no excess anything here—everything is pared down to essentials.

Composed almost entirely of broader bands of steel, it’s nearly seven feet high, and although square in its outlines, looks as though it was a giant mask, facing into a corner of the gallery. Or perhaps I should say, helmet, at there are a few broad bands down the center of the huge face.

Another – very vague -- association I had was with Max Ernst, though I couldn’t have told you why until I googled “Max Ernst images.” Then I realized I must be thinking of his postwar sculpture, “The King Playing with the Queen” which has absolutely nothing to do with the subject at hand, except in its general contours.

No. 6 stands diagonally across the back room of the gallery from the longest sculpture in the show, a ground-hugging piece in oiled steel nearly eight feet long called “Now I Lay Me Down.” Somebody (either Wilkin or Wolfe) clearly considers it the best piece in the show, as it appears on the cover of the nice little catalogue with Wilkin's essay in it, but I’m afraid we just have a difference of sensibility here, because it doesn’t work for me. To me, it resembles an earthbound version of Smith’s masterpiece, “Australia,” but with too much additional lattice-work laid on it. Maybe if I saw it outdoors, and could stand back from it…? At any rate, I urge other viewers to see the show and draw their own conclusions about it.

The front gallery is dominated by four very large & tall sculptures—all more than 9 feet high. They constitute a quartet, as can be seen from their titles: “Quartet Green,” “Quartet Purple,” “Quartet Gray,” and “Quartet Red.” The sight of these big, loosely sprawling vertical compositions all together is very impressive, and not without humor, either.

The central two remind me of a female and a male figure, so identified by the same kind of playful shorthand imagery that Joan Miró used to use in his paintings, back in the 20s and 30s (though otherwise looking nothing at all like Miró’s work). “Quartet Purple” has a small open box-like element down in what might be its genital area: it’s the she-one. “Quartet Gray” has a little ball perched on a small upright curlicue, in the same approximate area: this I take to be the he-one.

Quartets “Green” and “Red,” on the outskirts of this multi-piece composition, may perhaps be domestic servants, or attendant saints, or something. Both, at what might be the ends of their arms, are connected to straight-edged & rectangular wire elements: they are the kind of shelves that one finds in stove ovens.

I don’t know where Wolfe gets his supplies of steel to work with, but in most cases it is completely integrated into his compositions. These wire elements are the only ones that look like “found objects” to me. Not that this necessarily is a drawback, but it means that prior associations come with them (stove ovens).

Human figures, though, are not the only associations that I have with the four “Quartets” in their entirety. They also summon up memories of trees, with breezes fluttering through their leaves and branches. At a more distant remove, I am further reminded of Greco-Roman columns, not the stalwart Doric or the skinny Ionic, but the more complicated and imperial Corinthian.

One of the yellow pieces, "Spiral Yellow,” sits on a low platform, only 3 or 4 inches high, and full of curling slats with interwoven rods. I had to stand back from this piece to appreciate it, but when I did, I felt it full of grace and movement, almost like the foam on a wave, rushing toward the shore, or Leonardo’s drawing of a flood.

The second yellow piece in this corner, “Split Rock,” is a wall piece, fastened to the wall with just one screw (like the other wall pieces in the show). It has a triangular profile, with a couple of curlicues in the center, and a foot reaching down to the left, but good as it is, it doesn’t quite match the small red wall piece called “Just Right.” Aptly named, “Just Right” has only its bare essentials, no trimmings or distractions. It doesn't need them.Every piece of it fits, so it flutters and flies like a bird on the wing, and has two tiny open eyes on its tiny face to the left.

Don’t take my word for any of this. Make a point instead of getting to this almost endlessly rewarding show. You may disagree with my evaluations, once you get there, but isn’t that what makes horse-racing?