THE MANY FACES OF HORTENSE 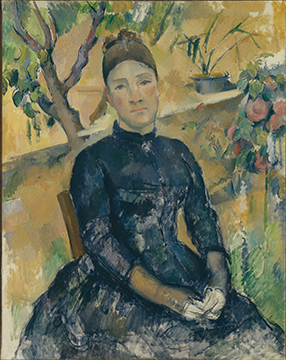 Next on my list of most-favorite Cezannes are the still lifes (especially the simplest ones). Last come the figure studies, especially the portraits--which, when you see them individually, all appear very similar.

Add to that the fact that this show consists of 24 oils, 17 pages of drawings and three watercolors, all portraits of the same person—and I began to fear for my faith.

That was before I saw the show. Now that I have seen it, it haunts me.

Place a five-star “recommended” button next to it, and, since the mobs that infested the Met during the holiday season have gone back to wherever they came from, make a point of getting there yourselves (if you haven’t already).

The subject of this show, Hortense Fiquet, was eleven years younger than Paul Cezanne and outlived him by sixteen years. First (according to the wall text at the museum), she was his model, then the mother of his son (also named Paul), and finally his wife.

This order of doing things was more unconventional in the 19th century (even in France) than it is (in the U.S) and in the 21st.

At the Met, I watched a father casually explaining this order, as recorded in the wall text, to his two sons, aged perhaps five and nine. They saw nothing out of the ordinary.

To be sure, there is doubt as to whether Hortense ever posed for Cezanne in the nude: the evidence of his sketchbooks suggests that most if not all of the poses of the nudes in his series of “bather” paintings were based upon poses of nudes in other paintings and sculpture, especially those in the Louvre.

These "bathers" are pretty much the only nudes he ever painted (though he took them up periodically, from smaller studies in the earlier years to the three biggies of his old age). To judge from his art, then, the naked female body – in the flesh – was not a subject he delighted in studying.

Still, for whatever reasons, he needed a “model,” and modeling was (and is) a slightly scandalous profession. Hovering in the background is always the implication that the model will be taking off all her (or his) clothing before a large group of people.

To the artist’s father, a provincial, prim & proper banker, the notion that his son was taking up with his model must have been horrifying—at least, to judge from the lengths that the artist went to conceal the liaison from him, and the amounts of time he and Hortense in consequence spent living apart from each other.

That may explain why every time Cezanne asked her to sit for her portrait, it was like coming home to another Hortense than the one he remembered. Despite the fact that all these pictures depict the same woman, they are extraordinary in their variety – the oils, anyway.

(The drawings and watercolors didn’t do as much for me. The museum’s literature attempts to make a case for their being more tender and personal than the oils, but I didn’t see it. In fact, I saw the reverse.)

It’s in the oils where the difference and the intensity are most prominent, though you might never know it, if you saw only one of them at a time.

That you are able to appreciate their range is due to the diligence with which they have been brought together from the corners of the globe.

True, the Met has two of its own in this exhibition, the Philadelphia Museum of Art has three, and two Paris museums – the Musee dOrsay and the Orangerie – have two apiece.

But one of the d’Orsay’s is on deposit with a museum in Aix, and the remainder are owned by museums from Yokohama to Houston to Detroit to Chicago to Stockholm to Sao Paolo to Basel.

Only the show’s organizers – the Met’s Dita Amory, with the aid of Kathryn Kremnitzer ¬¬-- know how widely spaced are the homes of the five paintings from private collections.

The point is, they’re all very different pictures, and not only in the artistic sense, of differing compositions and degrees of finish--though there is a tantalizing range of compositional devices here, and works that range from the most polished & finished to the half-done.

Also they vary enormously in the poses and costumes and accouterments shown.

At one extreme is the startlingly abstract small “Portrait of Madame Cezanne,” (ca. 1877), from a private collection. In it, nothing is to be seen except 1) the head of the lady, eyes cast down, and hair parted on the top of her head, 2) the shoulders of the striped dress she’s wearing and 3) the upholstery of the chair back behind her.

At the other extreme is the Met’s “Madame Cezanne in the Conservatory” (ca. 1891-92). In this much more formal image, Madame is seen from the top of her head – with a more elaborate hairdo -- to nearly where her full-length dress would be covering her knees.

One might call this a three-quarter length portrait, except that she’s seated, not standing. Behind her is the wall of the conservatory, embellished by potted plants and the top of a tree.

The lady is wearing long fingerless gloves, which seem to have been a fashion statement in the 1890s—and in every other way, she looks a perfect lady, too.

Every inch of this image is constructed out of those deft, short, straight & muscular strokes that constitute Cezanne’s way of turning every subject, even a supposedly soft & melting female body, into a rock-hard combination of cylinders, spheres & cones.

In this case, though, he is helped along by the armor-like corset that Hortense is obviously wearing under her dress. After all, every respectable woman wore such a corset in the later 19th century.

Who was Hortense Fiquet? Then as now, modeling was an occupation that required no education, and so could be taken up by women from working-class backgrounds, but the letter from Mme. Cezanne that is included in this show is written in very pretty handwriting.

Were the state schools in 19th century France so good that even a little girl from a working-class background could acquire such elegant handwriting? Or did she come from a more prosperous family that had raised her to value the arts—maybe even the avant-garde arts?

Either possibility might help to explain her extraordinary tolerance for a man who can't have been that easy to get along with. (The story goes that if somebody brushed against him as he was walking along the street, he would recoil in horror.)

The way he portrays Hortense varies enormously, not only in terms of composition and accouterments, or the different ways she wore her hair, but also in terms of the impression she conveys.

Here are some impressions of her personality that I got from looking at the different pictures: prim & sour, inquisitive, noncommittal, implacable, even (though rarely) gentle and eager to please.

Her physical features vary. Sometimes her face is seen as oval or rounded and a bit chubby. Sometimes it’s longer, even horse-like. Sometimes her mouth is clearly indicated, while sometimes it almost disappears. The shape of her nose varies.

In “Mme. Cezanne Sewing,” from Stockholm, that nose is prominent & hooked, so she looks like a mean old stepmother, hunched over her work.

In one of the paintings entitled “Portrait of Madame Cezanne” and owned by the Philadelphia Museum, she has her hair piled atop her head, a longer face, and what might be called a “ski-jump” nose.

All of these qualities make her look younger, but not as young as in another Philadelphia Museum painting entitled “Portrait of Madame Cezanne.”

In this one, her hair hangs down loose upon her shoulders, and her nose, while mildly prominent, isn’t hooked. Her head is bent in a pensive expression. She looks years younger, and innocent and pure as the Virgin Mary.

(Shopping in my local grocery yesterday, I noticed bottles labeled “Extra Virgin Olive Oil.” How can any virgin be “extra”? I wondered. To me, somebody is either a virgin or NOT a virgin—just as one can’t be only “a little bit pregnant.” But I digress.)

Anyway, the dating of Cézanne’s paintings has to be done almost entirely upon the basis of their stylistic evolution, as he practically never dated them himself and there are only a relative few with internal evidence (of a particular wallpaper, for example) that serve to identify a place & possible corresponding time frame.

Yet of the three paintings I’ve just described, “Mme. Cezanne Sewing” is the earliest, ca. 1877 (identification based at least in part upon the patterned wallpaper behind her, which decorated the Paris apartment that the family occupied during this period).

In other words, as the w0man herself grew older, the artist portrayed her growing younger.

Did Hortense anachronistically get a nose job and invest in Botox? Can this be another curious case of growing younger, like that of Benjamin Button in the movie?

Or was it simply that with the passage of time, the artist himself was able to outgrow his anger and/or fears regarding the female sex in general and to look upon his mate with more detachment—even affection?