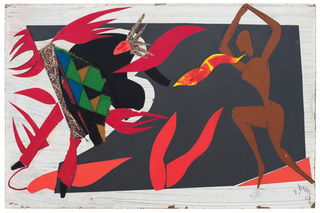 Romare Bearden. Bayou Fever, The Conjur Woman, 1979. Collage and acrylic on fiberboard, 6 x 9 in. © Estate of Romare Bearden. Courtesy of DC Moore Gallery, New York.
It’s been a while (like 50 years) since I published anything about Romare Bearden (1911-1988), and even longer since I attended a performance at an art gallery (like maybe never). Therefore, when I got an email from DC Moore, inviting me to the performance of a dance on March 24 (or 25), inspired by a series of 21 collages that the celebrated African-American artist had created in 1979, I decided to go for it, taking in both exhibition & dance together. The art show is “Romare Bearden: Bayou Fever and Related Works” (through April 29). The dance – and its inspiration, the 21 small- to medium-sized collages that constitute its “story-board” – are called, “Bayou Fever.”

Bearden created this series of 21 collages in hopes that Alvin Ailey would make a dance based upon it. He had worked with Ailey before, and his own wife, Nanette Bearden, was a dancer and had a contemporary dance company.

Ailey (1931-1989) never got around to it, so the performance I saw came from South Africa, in the form of a dancer-choreographer, Dada Masilo and two fellow performers, Llewellyn Mnguni & Thami Majela.

The music was based upon works by Paul Hammer, Hugh Masekela & Randy Weston, and the whole had been commissioned by the Center for Jazz Studies, Columbia University, in conjunction with the gallery.

To the limited extent that I am capable of appreciating modern dance, I enjoyed the performance, but (I admit) I had a better time before the dance began, when I was quietly responding to the 21 lively and eloquent collages, done in Bearden’s characteristic synthesis of Afrocentric cubism and collage.

(I also enjoyed some of the related works—not least, three black-and-white photocopied collages of the type exhibited at Bearden’s breakthrough exhibition at Cordier & Eckstrom in 1964--you can view all of them at the DC Moore website).

The story illustrated by the collages of “Bayou Fever”” itself is as hard to summarize as are most ballet (and opera) plots, but it all takes place in the Deep South, and specifically in and near a bayou---which is to say a kind of swamp forest most commonly found in Louisiana, and lushly illustrated by the first collage in the series.

The story begins with a mother, father and sick baby. The baby is taken to an “Herb Woman.” She prescribes medicines derived from plants only to be found in the bayou, but the father’s search for them is obstructed by an evil “Swamp Witch” and other wicked forces, including “Blue Demons,” “The Lizard” and “The Wart Hog,” and the “Terrible Hatchet Man.”

To combat all these bad forces, it becomes necessary to call in the good “Conjur Woman,” with her pet buzzard, a skull, and ropes that she can turn to vipers. This image is particularly vivid & abstract, built around a flaring composition of red & black.

After an epic battle, the Conjur Woman conquers all. Happier images enter the narrative: ‘The Magic Drummer, “”Earth, and a “Star from the Heavens.”

The father is able to find the plants he needs, the Herb Woman cures the baby, and then along come “The King of Past and Future,” “Beautiful Dreams,” “Wisdom,” and “The Emperor of the Golden Trumpet.”

It ends with a grand finale, everybody on their way to Mardi Gras.