CONTEXT RUN WILD FOR SEURAT AT THE MET 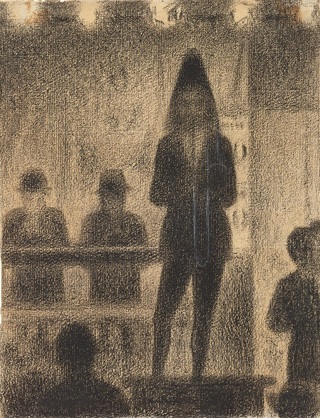 Georges Seurat (French, Paris 1859-1891 Paris). Trombonist. 1887–88. Conté crayon with white chalk on paper, 12 1/4 x 9 3/8 in. (31.1 x 23.8 cm). Philadelphia Museum of Art, The Henry P. McIlhenny Collection in memory of Frances P. McIlhenny, 1986.
Hercules Segers had nothing on Georges Seurat (1859-1891) when it comes to the magic of mystery, and nowhere is this more apparent than in the darkling splendor of his great painting, “La Parade” (1888), centerpiece of an absorbing and often enjoyable, but sometimes infuriating exhibition at The Metropolitan Museum of Art called “Seurat’s Circus Sideshow” (through May 29).

The highlight of the show comes right at its beginning, with the Met’s own prize, “La Parade.” This modestly-scaled (3’ x 5’) oil on canvas is done in Seurat’s own ground-breaking pointillist style, with all its speckled little points of light and dark.

The painting depicts a parade, or free sideshow, of a sort that was stationed in front of the little circuses which were apparently not uncommon in Paris in the 1880s. This sideshow was a way of inveigling passers-by into the bigger show and paying real money for it.

In this, they were unlike the sideshows in the New York circuses I used to attend in my childhood, which (if I remember correctly) were offered as part of the main attraction.

Moreover, Seurat’s sideshow consists of a frieze-like row of four and a half musicians (one bisected by the painting’s edge), a ringmaster and what the Met’s press release calls a clown but looks more like a dwarf to me. All are portrayed with dignity and serenity – no misery, just majesty here.

American sideshows dispensed with music and focused on freaks – not only dwarfs but also giants, the mustachioed lady, the two-headed dog and so on. In Paris -- or anyway with Seurat—musical talent would appear to have been a focal part of the attraction.

In the foreground of his painting, a row of the backs of heads of spectators includes the viewer in the crowd—but what gives “La Parade” an almost supernatural aura is the fact that it’s a night scene, with the flickering pointillist dusk punctuated across the top of the canvas by a row of gas lamps and the figures in the center of the picture surrounded by a kind of golden glow amid the dark.

Directly behind this unforgettable and highly original painting is an alcove in which the entire exhibition speedily descends from the sublime to the ridiculous. This descent is caused by a huge (7 x 20 foot) & repellently sentimental canvas entitled “Grimaces and Misery: The Saltimbanques” (1888).

It is by Fernand Pelez (1848-1930), an academic French painter of Spanish extraction well known in his day, according to Wikipedia, for depicting social issues in a realistic way – deservedly forgotten for more than a century but in today’s oh-so-Socially Conscious art world, evidently hot stuff.

Employing an excruciatingly pedestrian style, Pelez depicted three ages of circus folk, all equally disillusioned: four child acrobats to the left looking bored or irritated, a clown, a dwarf and a character in a period costume in the center, all looking smug or dissatisfied, and on the right, three aged seated musicians, looking weary and sad.

An unappealing sight both in terms of style and subject, but this is where the Met has placed a bench, so that all those pathetically under-educated (or wrongly educated) people who will come to see this show can rest their aching feet while contemplating this saccharin picture and doubtless concluding it must be a masterpiece, if the Met would give it such a big alcove (and a bench into the bargain).

Wouldn’t you know it! In its review of this show, the NY Times splashed a huge reproduction of this Pelez clear across the front page of the art section. Yet more evidence that in the pomonian era, bad equates to good.

As to the rest of this exhibition, it has a lot to recommend it, with more than 100 paintings, drawings, prints, period posters and illustrated journals, supplemented by musical instruments and ephemera.

All are inspired by the phenomenon of the circus as it existed during this period, both as it was documented in its own right and also as it was used as a metaphor for the leger de main of politicians.

And the period under consideration is defined as not only including the 1880s but starting in the 1830s – with nearly a dozen sparkling contributions by Honoré Daumier – and as far forward as the early 20th century, with Pablo Picasso represented by a small “Fairground Stall” (1900) and Georges Rouault, by a “Sideshow (Parade)” (1907-10).

After “La Parade” itself, the greatest joy in this show is 17 more works by Seurat, most of them his memorable small drawings with conté crayon, with or without the addition of gouache or white chalk. Some are circus studies, some depict other subjects.

One that stood out for me was the sprightly gentleman entitled “Dancer with a Cane” (ca. 1888-90)—he also has a top hat and wiggling tails. Another and if possible more charming is a simple study for the trombonist in "Parade," underlining by his solitude the importance of music as an underlying theme for not only "Parade" but for Seurat in general.

Among other works that helped to maintain a reasonable standard in this show for me included Louis Anquetin, “Avenue de Clichy (Street—Five O’Clock in the Evening)” (1887), and Henri-Gabriel Ibels, “Mademoiselle Olympe” (1893).

Jean-François Raffaëlli & Jean-Louis Forain, minor painters who sometimes exhibited with the impressionists, also looked good.
,
Pictures by Seurat’s fellow pointillists -- Paul Signac, Maximilien Luce, Louis Hayet & Lucien Pissarro -- are included. They’re pleasant enough, but also serve to remind us how much more gifted was Seurat than any of them.

Other names present and worth mentioning include Emile Bernard, Pierre Bonnard, Maurice Prendergast, & Rembrandt (the last-named as a model for later artists).

For the rest, a smattering of academic painters and a plethora of often tediously detailed journal illustrations, prints & posters by lesser lights reminds us that in the art world today, “context” all too often matters more than quality—not that you won’t find plenty to divert you in this show, but you may find looking at all of it un peu fatiguing.