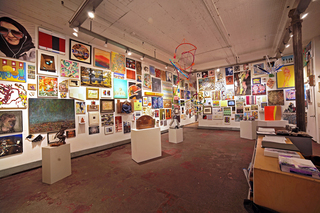 "Down the Rabbit Hole" at Sideshow
For the 15th year, we are getting our marvelous double dose of TRULY WORTHWHILE ART, constituting the handiwork of nearly 600 painters, sculptors, photographers, video artists and practitioners in a further range of media that defies description. The show in question is “Through the Rabbit Hole : Life on Mars,” at Richard Timperio’s Sideshow in Billyburg,.

Its cornucopia of goodies deserves its title because it represents a synthesis that you won’t see above ground or even on this planet in our high, mighty & overly real-estate-conscious megalopolis. This show is the sole place I know of where vast quantities of abstract and vast quantities of representational can lie down cozily together, like the lion and lamb in the Bible (extended through April 10).

As usual, this show isn’t only for artists. It also includes work by artists whose day jobs are as critic (Robert Morgan, Mario Naves) or dealer (Ellen Rand, Paulien Lethen). In what might be considered the latter category is Janet Kurnatowski, who at the moment is more occupied with a new baby than running a gallery, and pays tribute to her recent pregnancy in this show with a large and hilarious mixed-media relief of a bulging gilded torso, aptly entitled “37 weeks, 137 lbs., 34DDD.”

Another thing that I always enjoy about this show is all its family ties. One type of family tie is that of siblings – one of whom (among several sets) is Willy & Cheyenne Timperio. Another combination is parent and child – one set of whom (again, among others) is Ronnie & Noah Landfield.

Finally, we have a number of couples, among whom the best known are Larry Poons & Paula De Luccia. The Poons, an attractive little untitled abstract from 2006, hangs in a place of honor, right near Timperio’s computer, while De Luccia’s simply dandy square of loosely-painted vertical stripes is entitled “A Horse of Her Own” (2015).

We have all manner of celebrities, too, including Nicolas Carone, Dan Christensen, Harvey Citron, Bill Jensen, Tine Lundsfryd, Paul Resika & Thornton Willis (among others).

What I love about this show – and what no other in the New York has the good sense to offer -- is the generous sprinkling of artists (besides De Luccia & Poons) whom I know personally and even like to consider my friends and/or supporters. Either elsewhere or in connection with this show, I have sung their praises so often that I think this time around I will simply list most of them, and single out only a few outstanding ones for comment.

Also belonging in the same category but particularly worthy of notice are Lauren Olitski, whose darkly glittering acrylic on canvas is called “Islamorada Night Geist” (2015); Peter Reginato, whose radiant enamel on wood panel entitled “The Dope Peddler” (2015) is the best painting by him that I’ve seen in a long time, blessedly free as it is from Poonsian blips.

Sasha Silverstein's gifts are seen in a delectably tall & narrow “Still Life on Pedestal” (2015), while Ann Walsh once again triumphs with a classically simple abstract freestanding acrylic on Plexiglas, “Harp” (2015).

What I am devoting most of this review to, for I think maybe a change, is work that stood out for me by artists whom I didn’t mention last year, but whom I’d now like to praise.

Given the size of this exhibition, and the fact that I’m not made of steel, I’m sure that there’s much equally worthy work that you won’t find listed here. As always, the overall standard for this show is high.

Okay, among the abstract artists whose work impressed me in this show, I would begin with the abstract-minimal relief construction of René Pierre Allain, “Tablet with Blue Chord” (2015). It’s not often that I go for minimal art, but this one works.

I also went for “In the Weeds” (2015) by Jody Bretnall, a sweet little poured abstraction with imaginative color choices—an olive green field, with drippings in orange, silver, aqua and yellow.

I was moderately taken by the untitled group of four small squares of plaid watercolor in blue, black, brown and white on paper by Tim Casey¸ tacked unframed to the wall and dated between 2014 & 2016.


And I was very impressed by “Excavation (for EDK)” (2013-2015), a monumental encaustic on birch panel by Michael David, with a thick, creamy top surface in whites and pinks and pale greens, superimposed upon mysterious encrustations of perhaps purple or black or deeper green??

Laura Duggan contributes “Propulsion” (2015), a pleasant little foot-square acrylic with a schmear of pink on blues and greens. Marthe Keller exhibits “By Way of Sagittarius IV” (2013), a very decent small acrylic with a white square enclosed by spatters & a black/green square.

Anne Russinof is present with “Red Devil” (2015), a large, attention-getting and not-bad composition with brown swirls on a yellow and orange field

Christopher Tanner offers a striking, all-blue two-panel assemblage that is half-way between two- and three dimensions, with shiny buttons and “diamonds” etc. Entitled “Blue Narcissist” (2005), it would have been better without the fringe.

Alice Zinnes is seen at her best with a misty, cloudy small watercolor called “Hidden Found” (2015). Her approach works so much better at a small scale!

Mike Rose is responsible for “Dominos Ghost” (2014), a trenchant sepia-like photograph on canvas showing antique factories and/or warehouses on an old-timey waterfront. Eleanor Steinadler offers “Abandoned Construction, Truro MA #8” (2015), showing what looks like two piles of sand or gravel, in the midst of which stands a large power shovel or some other piece of construction equipment.

The most entertaining sculpture, too, inclines toward representational. High on the list of my faves is a droll, tiny ceramic statuette of a stout, seated grandmother-like woman in a babushka and an olive-flowered dress, entitled “Klava” (2015) and by Dasha Bazanova.

Startling in quite another way is “Neurostimulation I, II, III” (2015), by an artist who calls herself simply Christybomb; this is a tabletop mixed-media composition of two brightly-colored skulls, an ashtray with cigarettes and a pack of Marlboro, all bedizened with dangerously sparkling jewels.

Steve Gerberich is responsible for two motorized constructions in this show, both devoted to its rabbit-happy theme. The untitled one in the window on the street, with rotating bunnies, is site specific and reasonably cute, but the undated & untitled one in the back room of the gallery itself made me laugh outright.

It consists of a blue-and-white china bunny made in the shape of a small vase or pitcher, and peering through a round magnifying glass at a rotating circular abstraction. Hysterical!

Forthrightly comic is “Blanche Dumas and Her Double” (2015), by Carri Skoczek, a small puppet or doll made of stuffed pink fabric with big boobs and three legs – essentially naked except for black boots and long black gloves.

The most graceful, elegant sculpture is a small, semi-birdlike composition of narrow, gently curved strips of steel; it’s called “Bather 10”(2014) and by Lee Tribe.

Leading off the category of two-dimensional, representational images is a lively engraved plexiglass by Ginger Andro & Chuck Glicksman. Titled “Commodify or Die – Series One” (2015), it has six dollar bills hoked-up by images of everybody from Marilyn Monroe & Groucho Marx to Michelangelo’s “Creation of Man.”

Very pretty is the small vertical Japanese-y floral oil on a bright blue field entitled “Ruggles” (2009) and by Carrie Beckmann.

“Jazzy” is a good word to describe the pop-arty oil and enamel on linen of a man and woman dancing, “Opening Night” (2014) by Susan Bee. “Peaceful” might be applied to the polished impressionist-style oil on linen by Irene Buszko, “Pale Field & Maple Tree” (2001).

Finally, “cryptic” is the adjective of choice for “The House at McC.” (2015), by Caren Canier, a smaller mixed-media painting showing three soccer players with three balls in front of a house and behind a cluster of 7 birds (peahens? Grouse???).

An equally likable impressionist-style oil on canvas, “Landscape” (2015), is by John Cunningham; it shows fields and trees seen from afar.

Phyllis Herfield is known for her portraits of art-world celebrities. Her contribution here is an oil on panel “Portrait of Clement Greenberg” (2015). It’s hung just in back of Timperio’s chair, as if to bless the entire undertaking.

Absolutely precious is the small untitled 2015 pencil portrait of a studious-looking adolescent boy by Joshua Krajnak – a real joy to contemplate! “Digging Deep” (2015) is a somewhat conceptual puzzler by Claudia McNulty, depicting a reclining (dead?) male nude with a fox’s head and bearing such legends as “God damn Jesus” and “The Truth Will Set You Free.”

Spooky but in its way perhaps more compelling is “Hiroshima #10” (2014), a small oil by James Perry that portrays a frantically racing rabbit against a dizzying background.

Kim Sloane offers an ornate, richly-colored oil on canvas “Bird for Trees” (2015); its avian hero looks like a fugitive from a Chagall. A nifty, polite little starry night, complete with nebula, is offered by Sandra Taggart, in “Bleue Galerie” (2013)

Not too many figure studies stood out in this show for me, but one that did was the reclining sunbather seen from the back by Susan Taverna; her watercolor on handmade paper is called “Reclining Woman” (2014). A third impressionist-style “Landscape” (2015) that was pleasurable to contemplate was an oil on panel by Marc Wilson.

A smaller, crisper gouache on paper, created by Rachel Youens, presents an “Ocean Canal” (2015) as a view of a coast seen from the sea, with turbulent waves and windswept whitecaps in the foreground.

Finally I will list a fascinating watercolor by Ruth Hardinger that defies classification, being both abstract and representational. Titled “Water Color Wobble #11” (2008-2015), it consists of a row of torn and cut pieces of paper, painted midnight blue, and arranged so that the outer extremities are purely abstract, but the central juxtaposed pieces turns into a vivid mountain range. Go figure!

They're turkeys! Thank you for the mention!

I stand corrected! But don't want to change the text, because otherwise the joke (on me) would be lost--

Thank you for the mention, Piri.

Piri, You are my very first mention! Thank you!..x

Thanks Piri for a terrific tour through the Rabbit Hole. Thanks for mentioning my watercolor!

Thank you for mentioning my WCW!

You are all very welcome! The pleasure was all mine.

Thank you Piri for taking on such a daunting task you did a great job, Thank you for the mention too. Thanks also to Rich who makes this very special show possible.

Great job covering this monumental show and thanks Piri for mentioning me.