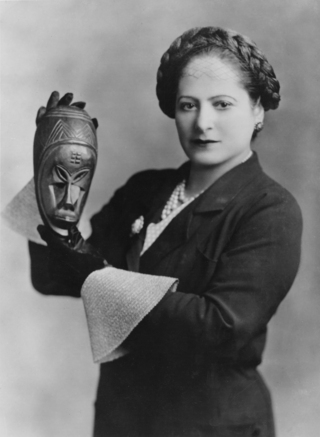 Helena Rubinstein holding one of her masks from the Ivory Coast, 1934. Photograph by George Maillard Kesslere. Helena Rubinstein Foundation Archives, Fashion Institute of Technology, SUNY, Gladys Marcus Library, Special Collections
Once again, a new fall season awaits us. Although I’m a bit late with it, I’d like to give you folks a rundown on coming attractions at the museums--some of which are already here. Sometimes I don’t get around to reviewing these shows until they’re fairly far along, which is an added reason for giving you a précis of what to expect – and, when necessary, advise you far enough in advance so that you can make bus, train or plane reservations.

First, at The Metropolitan Museum of Art, four biggies in addition to a raft of smaller exhibitions dealing with non-Western art

1. “Assyria to Iberia at the Dawn of the Classical Age,” through January 4, 2015. This exhibition chronicles the period centered around the 8th to 7th centuries B.C., when Assyria was the ruling power in Mesopotamia, the Phoenicians were plying the Mediterranean in search of trade, and the Greeks were in the pre-Classical era of the Trojan wars and Homer. Includes some 260 works of art, ranging from massive sculptures and wall reliefs to fine metalwork, carved ivories and precious jewelry. .

2. “Grand Design: Pieter Coecke van Aelst and Renaissance Tapestry,” through January 11, 2015. A somewhat smaller show, this tribute to the Northern European Renaissance master (1502-1550) will be centered around 19 of the grand tapestries that were woven in the workshops of Brussels from his design for collectors from Emperor Charles V (of the Holy Roman Empire) to France’s François Premier and from England’s Henry VIII to Italy’s Cosimo de Medici. Also on view will be a selection of Coecke’s panel paintings, a 14-foot woodcut frieze, and more than 30 drawings and prints.

3. “Cubism: The Leonard A. Lauder Collection,” through February 16, 2015. This exhibition of 79 paintings, works on paper and sculpture by Picasso, Braque, Gris & Léger will showcase the collection given to the Met by this older son of the cosmetics company founder, Estée Lauder (1906-2004). It will be accompanied by a major catalog with 22 essays by 17 scholars, tracing the role of these four artists in inventing and expanding cubism, as seen through the works in this collection. Lauder has been best known in the art world for his support and leadership of the Whitney (he is chairman emeritus). He is not to be confused with his younger brother, Ronald S. Lauder, who founded the Neue Galerie and has also been associated with MoMA (he is honorary chairman).

4. “Madame Cézanne,” from November 19 to March 15, 2015. Marie-Hortense Fiquet (1850-1922) was first, a model for Cézanne, second the mother of his son, and third, his wife. Although the marriage appears to have been somewhat dysfunctional (he disinherited her in his will), he painted oils of her primly corseted body and inscrutable face more often than anybody else except himself—(his paintings of nudes were apparently based more upon statues that he sketched in the Louvre). This exhibition will center upon 23 of Cézanne’s 29 known oil portraits of Hortense, plus 3 watercolors, 14 drawings and 3 of the artist’s sketchbooks with drawings of her in them—all of which, we are promised, will show a warmer & more forgiving aspect of the relationship.

Second, at The Jewish Museum, two exhibitions of note:

5. “From the Margins: Lee Krasner / Norman Lewis, 1945-1952” through February 1. Norman Kleeblatt, the Jewish Museum’s chief curator, was inspired to put together this show by the “magical synergy” he sensed between “Untitled” (1948) by Lee Krasner and “Twilight Sounds” (1947) by Norman Lewis in the museum’s landmark 2008 exhibition of “Action/Abstraction: Pollock, de Kooning, and American Art, 1940-1976.” These two works are included among nearly 40 artworks offering a more extensive investigation into these two most interesting artists who, perhaps because one was a woman and the other, an African American, are rarely discussed in the context of abstract expressionism.

6. “Helena Rubenstein: Beauty is Power,” from October 31 to March 22, 2015. Another queen of the beauty business is the inspiration for this exhibition, which will combine popular culture with high art. Rubenstein (1872-1965) opened her first beauty salon in the U.S. in 1915, when suffragettes were beginning to wear lip rouge as a sign of emancipation. The show will combine ads, cosmetics, and promotional materials from her beauty business with her jewelry & clothing, designed by the likes of Paul Poiret & Elsa Schiaparelli, her miniature period rooms, and selections from her art collection. This collection, dispersed after her death, included works by Picasso, Matisse, Elie Nadelman, Miró, Warhol & Marie Laurencin, as well as outstanding holdings in African & Oceanic art.

Third, at The Morgan Library & Museum,

7. “The Untamed Landscape: Théodore Rousseau and the Path to Barbizon,” through January 18, 2015. In its continuing commitment to offer the full range of Western European landscape painting, the Morgan has arrived at the Barbizon School, which documented the enchantments of the wooded landscape in the Forest of Fontainebleau in the middle of the 19th century, and has selected its leader, Théodore Rousseau (1812-1867) to celebrate. Rousseau is known for his oils on canvas, whereas the Morgan’s charter (official or unofficial) is for works on paper, but the 60 drawings and oil sketches in this show may well shed new light on his techniques and perspectives. Besides, aren’t sketches so often fresher and more spontaneous than the worked-up oil?