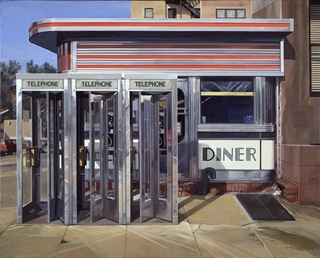 Richard Estes. Diner. 1971. Oil on canvas, Hirshhorn Museum and Sculpture Garden, Smithsonian Institution, Museum purchase 1977 . © Richard Estes, courtesy Marlborough Gallery, New York. Photo by Lee Stalsworth.
Here's the second installment of my report on exhibitions of greater than average interest this autumn, not only in New York but also within busing distance of the Big Apple.

The Museum of Modern Art has several “historical” retrospectives on the boards for this season. There’s one for Robert Gober(b. 1954), that ghoulish funnyman, and one for Elaine Sturtevant (1924-2014).

In her old age, she came to be known simply as “Sturtevant,” but she was amusing me back in the 60s, when she was already practicing what in the 1980s would come to be known as “appropriations.” However, the show that I – and a lot of other people, I’m sure – will really want to see is

1. “Henri Matisse: The Cut-outs,” through February 8, 2015. As seen at Tate Modern earlier this year, this monument to Matisse’s final years was inspired by a desire to show off the extensive renovation that MoMA’s “The Swimming Pool” (1952) has undergone. But the show goes far beyond that, with approximately 100 cut-outs, plus a selection of related drawings, illustrated books, stained glass, and textiles. MoMA is making provision for the crowds it expects – they are selling timed tickets.

At The Frick Collection, the big attraction is

2. “Masterpieces from the Scottish National Gallery,” November 5 through February 1. This selection from Edinburgh is constituted of nine key Old Masters, plus a portrait by John Singer Sargent (who was very talented but to me is not quite yet in the “Old Master” class). More than ordinarily unforgettable should be the Botticelli “Virgin Adoring the Sleeping Christ Child,” never before exhibited publicly in the U.S., the gritty realism of an early Velázquez, “Old Woman Cooking Eggs,” and a delicate Watteau fête galante.

The Solomon R. Guggenheim has a full schedule of exhibitions in the hallowed tradition of dada, including shows of the Zero group from Germany; Wang Jianwei, a Chinese maker of “time-based” art; and On Kawara, a Japanese conceptualist. The only exhibition of moderately recent work that may (or may not) be painting is

3. “V. S. Gaitonde: Painting as Process, Painting as Life,” through February 11, 2015. This is billed as “the first retrospective and museum exhibition of the work of seminal Indian-born modernist Vasudeo Santu Gaitonde (1924-2001).” It will include 45 major paintings and works on paper loaned by 30 museums, galleries and private collections from the U.S., Europe and Asia. They are said to have been inspired by everything from Klee to Indian miniatures, Zen Buddhism and East Asian hanging scrolls, so how much they will resemble our Western notions of “modernism” is anybody’s guess.

At Ronald S. Lauder’s Neue Galerie, the big attraction is

4. “Egon Schiele: Portraits,” through January 19, 2015. This exhibition of work by Vienna’s perennial bad boy is being organized by Alessandra Comini, an art historian who was in my class at Barnard, and will include approximately 125 paintings, drawings and sculpture. The show will be built around 6 groupings of Schiele’s work: Family & Academy; Fellow Artists; Sitters & Patrons; Lovers; Eros; and Self-Portraits & Allegorical Self-Portraits – all of which suggests that Dr. Comini is defining the concept of “portraits” with laudable freedom.

Moving on from the Big Apple to Washington, DC, we have several offerings that may tempt the art-lover to journey:

5. The Phillips Collection has “Neo-Impressionism and the Dream of Realities: Painting, Poetry, Music,” through January 11, 2015. This exhibition of more than 70 works combines the pointillism of Georges Seurat, Paul Signac, Camille Pissarro and their friends with their contemporary Symbolist writers and composers to explore the inner world of the mind as opposed to external reality. The selection, by 15 artists, emphasizes idealization of landscape and expressionism of portraits and figure studies to highlight kinships between their work, literature and music.

6. At the Smithsonian American Art Museum will be “Richard Estes’ Realism,” through February 8 (it has already appeared at the Portland Museum of Art in Maine). Estes (b. 1932) was a leader of the short-lived movement of the late 1960s and early 1970s best known as “hyperrealism” or “superrealism." In that context, he was known primarily for his quintessentially American urban landscapes, but this exhibition of 46 paintings includes other subjects that the artist has tackled in his 50-year career, from foreign cityscapes to explorations of the Maine coast, where he has spent part of the year since the late 1970s.

7. At the Luther W. Brady Art Gallery, George Washington University, the autumn show is “Susan Roth: Form Frame Fold,” through January 30, 2015. Knowing how this artist’s work challenges the boundaries between painting, collage, assemblage and sculpture, I can say only that the show will include 2 freestanding pieces and 19 wall pieces. There will also be an ambitious catalog, with three essays and a Q & A between the artist and the gallery’s director, Lenore Miller.

8. “Paul Strand: Master of Modern Photography,” through January 4, 2015. This major retrospective of one of photography’s early masters (1890-1976) will consist of about 250 of his finest prints, drawn primarily but not exclusively from the museum’s archive of nearly 4,000 prints. The show will carry the artist’s career from his early abstractions and street portraits through his close-ups of natural and machine forms, and on to his far-flung explorations of the American Southwest and Mexico on through Europe and Africa.

9. At the Museum of Fine Arts, Boston, will be what looks like the most spectacular show on this list: “Goya: Order and Disorder,” through January 19, 2015. Billed as the largest retrospective of Francisco Goya (1746-1828) to take place in America in 25 years, it features more than 160 paintings, prints and drawings, with 21 loans from the Prado and others from the Louvre, the Uffizi in Florence, the Met and the National Gallery in DC. Rather than following a chronological order, the show will be divided into eight sections, each with distinctive subject matter, so that viewers can see how the artist handled similar subjects in different media. This is not unlike the procedure followed in this museum’s sterling exhibition of “Degas and the Nude” in 2012, but there, chronology surfaced in spite of itself, and the same may prove true here.

10. Finally, on November 16, the wraps will come off the long-awaited new façade in Cambridge that, under the direction of Renzo Piano, will unite the three Harvard art museums (Fogg, Busch-Reisinger & Arthur M. Sackler) under a single roof. I am not at all sure that I’m going to like this. I’m still not very happy with the way that Piano downgraded art and upgraded snacking in his new façade for the Morgan Library in New York, but maybe this will be different. Or maybe I won’t get to Cambridge at all.