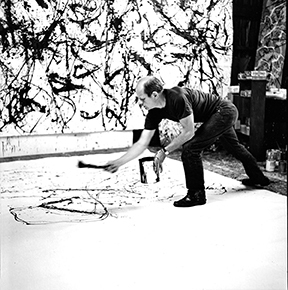 Or maybe you have a friend who falls somewhere between these two extremes, but might still want a short but extremely knowledgeable and well-written book about “Jack the Dripper” (as Time magazine so derisively but unforgettably called him).

For all three possibilities (and maybe even yourself) may I recommend “Jackson Pollock,” by Helen A. Harrison, just published by Phaidon. It would make an ideal house gift or stocking stuffer.

It is available from Barnes & Noble online (and for all I know, from Amazon as well) for the bargain price of $18.47 (plus postage, of course, unless you want to order another book & get your total up above $25, in which case postage is free).

True, this book is only 146 pages long, and meant to be only an introduction: it’s part of Phaidon’s Focus series, which consists of “essential introductions to modern masters.”

This series has previously immortalized a pretty dreary list of “masters,” including Andy Warhol, Jasper Johns, Francis Bacon & Anselm Kiefer. The only previous artist on the list whom I would call a master is David Smith, but we’ll let that pass.

The point to bear in mind is that Harrison, who has been director of the Pollock-Krasner House & Study Center for longer than perhaps she’d care to have me mention, really knows her stuff.

Authors from all over (to say nothing of movie-makers) have come to ask her for guidance. They have done this, and not only because she has a) read all the previous books, b) seen all the previous movies, and c) read, looked and/or listened to all the unpublished material in which the Study Center abounds.

Also, it's because she’s right there in the house & on the grounds where Pollock lived and worked.

This gives her – and her book-- the kind intimate feel for his methods & his accomplishments that only proximity can give.

I have to confess, I haven’t read this book in its entirety. I am too busy with Christmas preparations to sit down & check all her references (particularly since her footnotes are only online, at her website, www.helenharrison.net ).

But I’ve read enough to see that she’s all up on the latest exhibitions and scholarship – for example, including photographs of the sculptures that Pollock made, the summer of his death, and that made their first Manhattan appearance at Matthew Marks in September of 2012

I also noted some interesting early, representational work that I couldn’t recall having seen reproduced in color elsewhere. Indeed, the whole book is rich in good-quality color reproductions of Pollock’s work.

Admittedly, big horizontal pictures like “Autumn Rhythm” suffer from being reproduced in double-truck format, with the spine of the book intruding down the center of the image, but the verticals, like “Full Fathom Five,” look just fine.

I could have wished for a little more warmth in Harrison’s handling of Clement Greenberg, although I thought her treatment of him was fair and virtually free of the kind of nonsense we have had about him from other authors.

I would also have liked to see Francis O’Connor’s MoMA catalogue for Pollock’s 1967 retrospective in the list of “Further Reading” which substitutes for a “selected bibliography.”

I could understand why it was omitted, since it is primarily a compendium of reviews of Pollock’s shows and media comment about him, but I found it a very handy introduction to the widely-varying nature of those comments myself.

On the other hand - and more importantly – I was very impressed by Harrison’s detailed discussions of exactly how Pollock made his work, and the materials and surroundings that went into it .

Just one example is her discussion of how the wooden floor in the converted storage barn in Springs where he painted his most famous paintings gave him exactly the hard surface he needed.

She takes her point of departure from a comment he made to his friend, Jeffrey Potter, but her expansion of this comment is very much her own.

Another useful thing she does is debunk the myths and legends that have grown up about Pollock, especially two biggies that Ed Harris used & even exploited in his otherwise fine movie about the artist.

For one thing, Pollock’s mural for the town house of Peggy Guggenheim was NOT painted in a single night. Chemical analysis of the oil paint shows that successive layers dried before new ones were applied.

For another, Pollock DIDN’T just “discover” his pouring technique by accident. He developed it gradually over a number of years.

I could go on, giving more examples, but perhaps I’ve said enough to pique the interest of my readers. The only thing I really need to add is that this book is written clearly and sensibly, without any of the art-histobabble so dear to the hearts of academics.

Although Harrison holds an M.A. from Case Western Reserve University, and has published voluminously elsewhere, I first became acquainted with her writing through the many reviews she published in the Long Island supplement to the Sunday New York Times (a supplement now discontinued). And, in my obviously prejudiced opinion, there is nothing like good-quality journalism for encouraging understandable prose.