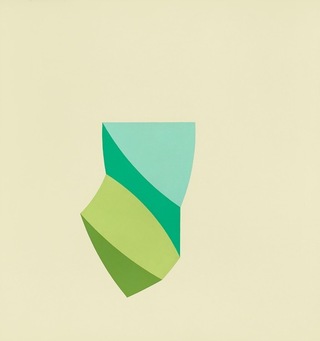 Walter Darby Bannard, Green Grip #2, 1964-1965. Acrylic on canvas, 66 3/4 x 63 inches. Courtesy Berry Campbell.
Ameringer McEnery Yohe has a small show of 30s and early 40s Hans Hofmann in its back gallery, and a large show of recent work by Bo Bartlett, a 60-year-old allegorical realist, in its front two galleries (both shows through August 12). Berry Campbell is devoting its entire exhibition space to “Summer Selections” (through July 22). All three exhibitions are not without interest—but if I am rushing into print with this review (only a day after my last post), it’s primarily to tell my readers about the Berry Campbell show before it closes.

The five Hofmanns on display, in “The Summer Studio,” are hardly radical, being semi-abstract instead of abstract – and often looking semi-finished as well.

One suggests a vase or bouquet of flowers; three suggest landscapes, and the fifth looks more like a figure in a studio than anything else.

I liked this last one best, though all five paintings exude the exuberance that was so much a part of the Hofmann ethos, communicated (as so often in his later work as well) through his radiant color.

His 1981 certificate in fine arts comes from the Pennsylvania Academy of Fine Arts, and his approach reminds me a good deal of Sidney Goodman (1936-2013).

I wrote about Goodman for the Terry Dintenfass gallery in the early ‘70s; he could have been one of Bartlett’s teachers, since he joined the PAFA staff in 1978 or 1979 and remained there until retiring in 2011.

I am also reminded of a lot of other academic realists by Bartlett’s work, including Komar & Melamid, the Russian émigré team who made such a splash in New York during the last part of the 20th century, and two painters from the 1940s whom I learned about through my dissertation, Jared French & Luigi Lucioni.

For that matter, there are also those Chinese fantasists working in the style of Soviet realism who were so popular at the Armory Show a few years back, and somebody else whose name escapes me at the moment.

But hey, as Dogberry says in “Much Ado About Nothing,” comparisons are odorous, so I will leave off with them and merely say that Bartlett’s allegories must be in their own way, unique.

I only wish I wasn’t quite so turned off by the painting which begins the show, and depicts the artist shooting a gun. This was a little too topical for me.

Three blocks north, at Berry Campbell, we have 21 paintings by 19 artists (Dan Christensen has three; everybody else has only one).

Of this group, I am going to single out eight as particularly worthy of comment (omitting comment on works by Stanley Boxer & Joyce Weinstein, as I just reviewed a whole show of Boxer’s, and may be reviewing the show Weinstein has scheduled for this gallery in August).

Clement Greenberg, so I understand, used to say that five good pictures in a show made it a good show, so this is definitely a quality exhibition.

The star here is “Green Grip #2” (1964-1965), by Walter Darby Bannard. An elegant example of Bannard’s minimalist period, it centers on a smallish ethereal shape of indeterminate purpose in several shades of green.

This is surrounded by a pure pale area that in reproduction may look like a raw canvas, but is actually a creamy white. Freshly cleaned, it glows.

Next on my hit list is an absolutely zippy Larry Zox, entitled “Cordova Diamond Drill” (1967). The artist’s hallmark diamond outline, embellished by an extra V-shape near the top, streaks in raw beige canvas downward from its top to its bottom, dizzily off-center and surmounting a painted field of steely gray-black.

William Perehudoff is another favorite of mine, even if his titles leave a lot to be desired. This stellar sample of his talents is entitled (if that’s the word I want) “AC-86-66” (1986) and sites a large gray, glowing, partially-deflated balloon-shape on a luscious light red field. The balloon-shape is underlined by thick arcs of pink and mustard.

Though she’s much younger, Jill Nathanson more than holds her own in this august company, with her filmy “Light Yield” (2016). Its pale veils of squared-off color explored a narrow but compelling range of yellows, tans and baby blues.

Of the three paintings by Christensen, I found the somewhat busy & complex “Blue Flame” (1971) delicate and likeable.

Frank Bowling is represented by “Storm Window III” (1996). I haven’t seen much from this period in Bowling's career lately, but I remember viewing this piece’s kinfolk in the 1990s, and welcome the genre back.

Very enjoyable are its rich, deep hues of green and red, applied with small mounds of gel to offset the geometry of squares and rectangles of canvas cut out with pinking shears and collaged or stitched onto a master field.

Finally, I was at first very taken with the painting by Albert Stadler (1923-2000). Artistic little dabs of brighter color had been carefully painted atop a cloudy and presumably sprayed-on field of assorted reds and related colors.

Then I looked at the checklist and saw that it was titled “Wildflowers” (1974). That killed it for me, I’m afraid, reducing it from serious painting to kitsch. Why couldn’t it just have been called something less terminally cute, say like, “Study in Reds, Blues, Yellows and Greens”?