SUMMERTIME AT THE GUGGENHEIM 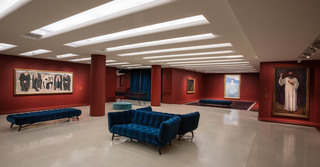 First on my list is a show that lured me to the Guggenheim for a media preview at 3 pm on Thursday, June 29. This was “Mystical Symbolism: The Salon de la Rose + Croix in Paris, 1892-1897” (through October 4, then at the Peggy Guggenheim Collection, Venice, October 28 through January 7, 2018).

This show is housed in one of the higher-up Tower galleries, off the main rotunda (aka the main ramp). It is modestly scaled, with only about forty works in it, and deals with a particular flavor of late 19th century Symbolism as it manifested itself in the visual arts.

To be more specific, the show centers on a salon organized by a novelist and art critic named Joséphin Péladin (1858-1918).

Péladin was attracted to Rosicrucianism, a belief or philosophy shared by a number of orders or associations with an interest in mysticism, the occult and (maybe) alchemy. However, not being satisfied with any of these other orders or associations, he had founded his own, taking the title of “imperator” or “Super Magician.”

As a critic, he had strong reservations about the official salons of the Académie des Beaux Arts – and about their principal opposition, the impressionists, who showed at the Galerie Durand-Ruel. So he founded a new salon, with a Rosicrucian name (“Rose” and “Croix” obviously being the two components of this name.)

It too premiered at the Galerie Durand-Ruel and lasted six years. All the paintings in this exhibition were shown at one of those six salons.

Some of the subject matter of the paintings here is provocative, with literary, mythological or religious themes. Where the problem arises is with the execution. Péladin invited at least two famous artists he admired, Pierre Puvis de Chavannes & Gustave Moreau, to send work to his Salons. Both said thanks, but no thanks.

Some of their students sent work. Alas, none of them – while clearly influenced by their masters -- were up to the standards of those masters, to judge from this show. Still, it’s unfair to judge the accomplishments of Georges Rouault, one of Moreau’s students, from the very early and not-yet-typical painting of “The Holy Women Mourning Christ” (1895) included here.

One artistic tradition that Péladin obviously didn’t object to was that of the later English Pre-Raphaelites. Another was Art Nouveau. So what doesn’t look like weak imitations of Dante-Gabriel Rossetti or Edward Burne-Jones may look a bit like Alphonse Mucha or Aubrey Beardsley.

There seem to be two types of women favored by these painters, the seductive femme fatale and the innocent femme fragile. But the commoner femmes fragiles here tend to lack the zing of the less frequent femmes fatales.

Still, there are some strong paintings in this show, including three striking portraits of Péladin himself, lined up together. The first, by Marcellin Desboutin, shows the “imperator” at three-quarter length in a luscious black satin jacket and a lace jabot (1891).

Also impressive are “The Disappointed Souls” (1892), a long horizontal, hypnotic study of five depressed-looking, crouching men on a bench by Ferdinand Hodler, a Swiss artist, and a dandy femme fatale by the Belgian Fernand Khnopff, enigmatically entitled “I Lock the Door Upon Myself” (1891).

The whole ambiance, with dark maroon-colored walls, dark blue curtains sheathing the windows, and unusually comfy dark blue velour-like sofas and light blue-green velour-like ottomans (both from Roche Bobois) is just like a cool mountain cave and a great escape from the heat of Manhattan streets.

As it’s not a terribly big show, you don’t get exhausted looking at all the art. I’m sure the catalog is impressive, too, if you want to read all about it. The show was organized by the Guggenheim’s Vivien Greene, with the assistance of its Ylinka Barotto, and Dr. Greene also edited the catalog.

Moreover, the media preview was a blast. Normally, media previews are held in the morning and you get coffee or tea (and sometimes juice). But as this one was in the afternoon, we had a choice of red or white wine, fancy bottled water, and soft drinks.

I was told a record-shattering number of art critics turned out –like maybe 100??? They should have previews in the afternoon more often.

If it’s masterpieces you want, the Guggenheim can accommodate you with those, too. Though you must have seen at least some of them before, you have never seen so many of them on display all together.

They occupy the entire ramp/rotunda with over 170 stellar examples of painting, sculpture and so on by more than 70 artists, ranging from Pissarro to Pollock – and they are all from the Guggenheim’s permanent collection.

That is because the show is “Visionaries: Creating a Modern Guggenheim” (through September 6). As organized by the Guggenheim’s Megan Fontanella (with assistance from Ylinka Barotto), it’s dedicated to sharing the glories donated to the museum by six of its most prescient and generous benefactors.

The six begin with Solomon R. Guggenheim himself (1861-1949), the mining magnate who started it all by collecting art (with his wife, Irene Rothschild Guggenheim) from the 1890s onward, but only seems to have switched over to modern art in the late 1920s, after he met the Baroness Hilla Rebay von Ehrenweisen (1890-1967).

Rebay is the second visionary honored in this show. Although very few works in it actually come from her collection, her dual roles as advisor to Guggenheim and first director of his museum (initially called the “Museum of Non-Objective Painting”) were crucial to the collection’s formation.

An Alsatian aristocrat who’d studied art as a young woman, she’d become enamored of a Kandinsky-like abstract painter, Rudolf Bauer, and shared his enthusiasm for abstract painting – especially that of Kandinsky.

When she immigrated to the US in 1927, she brought some of Bauer’s paintings with her, and hung them in her studio. When Guggenheim came to have his portrait painted by her, he saw these paintings and listened to what she had to say about them. The rest, as they say, is history.

Next after the Kandinskys on the upward trudge along the ramp come early modern masters assembled by Justin K. Thannhauser (1892-1976): not only Pissarro but a delicious Manet, “Before the Mirror,” Blue Period Picasso and some Cézanne.

Nobody who collects Cézanne can be all bad in my book, but there’s no denying that the taste of Thannhauser, a Berlin dealer who had immigrated to the States with the onset of Nazism and subsequently persuaded the Guggenheim to accept his collection, was more conservative in his tastes than Guggenheim himself had become (Guggenheim was dead by the time the gift was accepted).

Nierendorf was another émigré German dealer whose inventory was bought out by the Guggenheim after his death. Dreier was a wealthy collector born & raised in Brooklyn Heights who ultimately gave most of her collection to Yale.

Peggy, as Pollock fanciers know, was Solomon’s niece who bought a lot of art in France around 1940, then returned to the U.S. during World War II and set up the Art of This Century gallery. There she exhibited not only Pollock but also Motherwell, Rothko and other fledgling abstract expressionists.

She signed a contract with Pollock, agreeing to take his paintings in exchange for a regular stipend, and she loaned him and his wife, Lee Krasner, the money to buy their house in Springs. She also gifted museums across the country with important Pollocks.

After the war, she went back to Europe and settled in Venice, where she opened her palazzo on the Grand Canal once a week to visitors who wanted to see her collection while she was still alive – and only left it to her uncle’s foundation when she died.

However, these last three visionaries were often acquiring work at about the same time—the late 30s and early 40s -- and often displaying similar tastes (both Dreier and Peggy employed Marcel Duchamp as an advisor).

Therefore, some of their contributions are displayed together – and only after we get a second massive dose of magnificent work acquired by Solomon.

This second, Solomon-dominated stretch of the ramp includes awesome paintings by Robert Delaunay (especially a towering example from his “Eiffel Tower” series), early & powerfully abstract “tubism” by Léger, three gems by Picasso & Braque from the period of Analytical Cubism, and brilliant pre-futurist and futurist paintings by Franz Marc (to say nothing of monumental canvases by Modigliani & Chagall, and two exquisite early gray-dominated abstractions by Mondrian).

It was at this stage that I began to feel overwhelmed – though not so overwhelmed that I couldn’t appreciate a charming little mature Mondrian from the Dreier donation, and a whole alcove with 11 witty little pieces by Klee (6 from Nierendorf, 1 from Peggy, and 4 from the Solomon donation).

Also in this stretch, we have an impish pale blue Miró, early Adolph Gottlieb & William Baziotes, and so on & on --- I’ve only mentioned maybe 30 percent of the artists on view. This is one show you really need to see for yourselves, and I’m sure you will all have your own favorites.

I do think that the pepperoni on the pizza is provided by Pollock’s “Alchemy” (1947), a truly brilliant example of his classic poured period. It has been newly cleaned and restored by the Guggenheim’s New York-based conservation department, so that its aluminum paint gleams like silver, but – I like to think – it should really live at home on the Grand Canal.

I was fortunate enough to see the “Visionaries” show with a delightful and very civilized married couple of my acquaintance. In fact, it was their suggestion that I go to see this show with them.

I normally take a fairly dim view of shows that museums base entirely on their own permanent collections, but thanks to this couple, I decided to make an exception in this case, and was I glad!

All three of us had a splendid time admiring everything. The husband of this pair perceptively observed that our fellow visitors also seemed to be getting a lot more out of the show by stopping to look at the work on view, and not spending all their time snapping little pictures of it with their i-phones.

He observed that there are a lot more people occupied with their i-phones at MoMA.

The wife of the pair knew the show in the ramp was about the permanent collection, but she hadn't realized that it was going to be structured around the people who had given work to the museum.

She had been looking forward to seeing the museum’s distinguished collection of work by Brancusi – but, she said, that had been acquired under the leadership of James Johnson Sweeney, who succeeded Rebay as director in the 1950s. Evidently being a mere director disqualified him from the role of “visionary,” so no Brancusi sculptures that he had acquired were included in the "Visionary" show.

A few days later, however, when googling “Sweeney” and “Brancusi,” I discovered a third show at the Guggenheim which any serious art lover should enjoy. This is “Guggenheim Collection: Brancusi” (through January 3), and naturally I had to go back to see it.

It’s housed on level 2 of the Tower galleries, easily entered from the ramp just beyond Rebay's portrait of Solomon Guggenheim and his attendant Kandinskys.

To be sure “Brancusi” is not a big show. It has only six sculptures in all, plus twelve of the artist’s photographs of other work in his studio, but it’s beautifully installed (in space normally occupied by the Thannhauser collection which is now on the ramp).