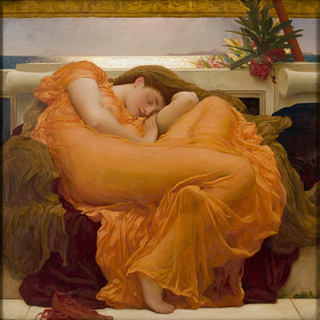 Frederic Leighton, Flaming June, ca. 1895. Oil on canvas, 46 7/8 x 46 7/8 inches. Museo de Arte de Ponce, The Luis A. Ferré Foundation, Inc.
Being a passionate Anglophile, I’m delighted by two of this summer’s shows. They are “The Critique of Reason: Romantic Art, 1760-1860,” at the Yale University Art Gallery (with 300 paintings, sculptures, drawings, prints, photographs and medallions, through July 26), and “Flaming June,” at The Frick Collection (just one painting—but what a one!—through September 6).

I’m sorry to be so slow to review “The Critique of Reason: Romantic Art, 1760-1860,” at the Yale University Art Gallery. I actually saw it in late June, when I was last in New Haven to give my talk on “Swinging London” to the National Coalition of Independent Scholars.

My attention to this extensive and handsome show at the University Art Gallery had been drawn by Karen Rosenberg, who contributed a nice review of it to the New York Times on April 10.

If I had to sum up the exhibition’s rationale (and Rosenberg’s interpretation of it), my summation might be that—along with Emanuel Kant – the artists involved all believed that “reason is a good servant, but a poor master.”

In other words, the Romantics of the late 18th and early 19th centuries weren’t dreamy-eye escapists from the realities of life, as they have so often been portrayed.

Rather, these artists believed that although these realities might be explicated by the application of 18th-century-style rationalism, that process would still leave out their key ingredient, which was their emotional content, impact—or both.

This theme enabled the show’s team of five organizers, led by the gallery’s Lisa Hodermarsky, to put together an arresting sequence of 8 sections.

All were designed to show how even the Romantics were involved in practical topics, ranging from politics and scientific investigations of nature to non-Western cultures, the role of religion in a post-Enlightenment community, and the evolving practical evaluation of the sketch.

By using this topical approach, the show’s organizers were also able to achieve much novel juxtaposition, stimulating to fresh interpretation—while at the same time respecting the unity of certain elements.

What a joy, for example, it was to see all (or maybe almost all) of the 82 satirical etchings that comprise “The Disasters of War,” Goya’s singularly trenchant suite done between 1810 and 1820.

They are all hung together -- so very much preferable to the way that the suite was cut up into bite-sized little pieces for the Goya retrospective in Boston last summer,

Among the French artists represented are Delacroix, Géricault, Honoré Daumier & David d’Angers, but there are not too many examples of their work, and none that I can recall of majestic proportions.

I noticed few if indeed any German artists, no Scandinavians, and no Americans. Yet all of these nations had their Romantics, too.

Most of the show is Brits, with generous lashings of Constable & Turner, plus many works by other favorites of mine, including William Blake, George Stubbs, & Samuel Palmer.

And what lovely paintings are comprised by this group! I could sit all day in front of Constable’s “Hadleigh Castle” (1829).

Still, while this heavy preponderance of Brits was very welcome to my Anglophilia, I feel obliged to point out that a great many of these works were already familiar to me--having been lent to this show from across the street by the Yale Center for British Art. There I have seen them many times.

At the moment that museum’s gorgeous building is closed through next spring for renovation. Its desire to keep so many of its masterworks on view may well have provided the impetus for this exhibition.

However, practically everything else in it belongs to the Yale University Art Gallery. Doubtless many of these works aren’t usually on view, but there are only a tiny handful of outside loans.

“FLAMING JUNE” AT THE FRICK

“Flaming June” (c. 1895) is our august summer visitor from the Museo de Arte de Ponce, in Ponce, Puerto Rico. It hangs in the Oval Room at The Frick Collection, its place of honor facing the Garden Court.

It is flanked by four admirable but much more familiar (also much darker and much more freely-brushed) full-length portraits by James McNeill Whistler (1834-1903).

"Flaming June" is the handiwork of Frederic Leighton (1830-1896), a British painter who was Whistler’s near-contemporary and sometime rival.

In its day, Leighton was much better established than Whistler – even achieving the presidency of the Royal Academy in 1878, the same year that he was knighted (and eventually becoming a peer, the day before he died).

As French-style avant-gardism, from post-impressionism through to cubism, ascended to stage center in London as well as Paris in the early 20th century, academic painters like Leighton descended into oblivion.

However, with the return to figuration in the form of pop art in the 1960s, and the concurrent rise of that highly contagious sensibility that Susan Sontag so memorably identified as “camp,” academic art began its long return to popularity.

She did cite the writings of Walter Pater, the drawings of Aubrey Beardsley, and the androgynous figures in later Pre-Raphaelite paintings as examples of art admired by devotees of camp.

All were either closely allied to, or very much a part of, the Aesthetic Movement in late Victorian England—the same movement to which Leighton belonged.

Still, there is a difference between the qualities prized by lovers of “camp” and the credos of Pater and his fellow aesthetes.

According to Sontag, camp is “one way of seeing the world….not in terms of beauty, but in terms of the degree of artifice, of stylization….”

Yet the paintings of Leighton, and the drawings of Beardsley, were considered very beautiful when they were created, and intended to be so.

What distinguished them to their contemporaries was the fact that they had no purpose or moral or message beyond the mere fact of their beauty.

They were, in the phrase originally coined in 1835 by the French journalist Théophile Gauthier, l’art pour l’art, or, as Pater later promulgated it, “art for art’s sake.”

How ironic that this phrase should now be best known as the definition of that apogee of French-style avant-gardism, abstract painting! Strange are the ways not only of art but also of language.

But to return to “Flaming June” itself. Leighton’s masterpiece measures just under 4 feet square. The painting is very appropriately surrounded by an elaborate gold portico-like frame, with Ionic pilasters on either side, rosettes at their bases, and a classically-embellished frieze across the top.

The powerfully-built brown-haired woman portrayed in the picture, curled up on a bench of her own, is deep in dreamland. Some oleander flowers decorate the balustrade behind her, and a Mediterranean vista extends deep beyond them into space.

Like the frame of the painting, this lady’s diaphanous orange costume is more Greco-Roman than anything else.

It clings so closely that every curve of her voluptuous, statuesque body can be seen through it—though since she is seen from the side, all that is revealed (except for one modest little nipple) is her face, arms and powerful, upwardly-bent legs.

Her right thigh, in particular, which stretches almost clear across the painting, is so long that it suggests she might be as much as seven feet tall if she stood up.

Some of the brushwork in the background of the painting is moderately loose, but most of it – and especially in the figure – is tight and precise.

This creates the “licked” surface that was so popular among 19th century academic painters (in both France and England) and was a major characteristic differentiating academics from avant-gardists at that time.

Also popular among academic painters, especially in Victorian England, were lovely ladies in clinging Greco-Roman costumes. Leighton made many other such images besides “Flaming June.”

Alma-Tadema’s contribution was to situate such figures in coyly anachronistic genre scenes that had at least as much to do with the British Empire as they did with the Roman one.

Typical topics for Alma-Tadema included a visit to the doctor, women playing “he loves me, he loves me not” with daisy petals and the like.

Whistler scoffed at this, calling it “five o’clock tea antiquity.”

Such remarks sell Leighton short. Born to a wealthy Yorkshire doctor, he never had to paint for a living—his father sent him an allowance even after he grew up. Meticulously trained in his art on the Continent, he settled in London in the 1860s.

At first he became familiar with those Pre-Raphaelite painters who were most influential in the later stages of that movement’s development: Edward Burne-Jones & Dante-Gabriel Rossetti.

He had already established a name for himself by executing elaborate scenes from history or literature for which the Pre-Raphaelites, no less than more conventional academic painters, were known.

But it is to Leighton’s later involvement with leaders of the Aesthetic Movement, from Pater to Moore, that paintings like “Flaming June” belong.

Although it is definitely and even overbearingly sensuous, its title has since come to acquire a couple of meanings that it didn’t have originally.

According to the 20-volume Oxford English Dictionary, with its three million historical quotations, “flaming” came in the 20th century in the U.S. to mean an egregiously homosexual man, as in “He’s a flaming queen.”

In the UK, on the other hand, it became—also in the 20th century--what grammarians call an “intensifier,” and – since it begins with the letter “f”—also a euphemism for the f-word, as in “Don’t be such a flaming idiot!”

Back in 1895, "flaming” simply meant “burning”or “fiery,” and as such, the perfect word to describe the bright orange garment that the lady is wearing.

She’s named June, I would say, very simply because she stands for and personifies that sunniest month in the calendar.

It may not be the hottest month, but it is the one when the sun is highest and longest in the heavens. This is especially true in England.

Because the country is on the same latitude as Labrador, the time between sunrise and sunset can be up to 16 hours long in June--to say nothing of the pre-dawn light which precedes that time frame and the dusk that follows.

In 1887, Albert Moore had painted a picture showing three Greco-Roman ladies in white undergarments and orange overgarments; he called it “Midsummer.”

It wouldn’t surprise me a whole lot to learn that Leighton was familiar with that picture, or with some common source for it, painted or written. .

In his catalog essay for this show, Pablo Pérez d’Ors, from the Museo de Arte de Ponce, speculates on the relationship between the sleeping pose of the mysterious lady June, and the fact that Leighton, when he painted it, was in poor health and destined to die within the next eight months.

Pérez d’Ors also points out that oleanders, while luscious in appearance, often symbolize danger in Victorian poetry—quite rightly so, as they are highly poisonous (particularly when taken internally).

This leads him to wonder whether this particular combination means that the sleeping woman, like the flowers, might be as dangerous as she is alluring.

I’d go further, and suggest that maybe to Leighton, women in general were scary.

He never married, though opinion is divided on whether he was straight or gay.

It’s true that he was fond of having young men around his palatial studio-house in Holland Park (now a museum). But there were also rumors that he sired a child by one of his models.

Secretive to the end, he left no diaries and even his surviving letters carefully avoid discussing his private life.

All of which only adds to the mysterious charms of “Flaming June.”