TWO FOR THE CRAZE (PART I: SIMILARITIES) 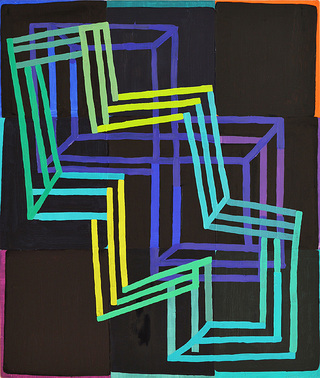 Jason Karolak, "Untitled (P-1437), 2014. Oil on linen, 20 x 17 inches, JK10177. Courtesy McKenzie Fine Art, NY.
On January 23, Holland Cotter sniffed in The New York Times at “the current craze for abstraction.” He dissed it again on February 27, suggesting that his readers might be fed up with “brain-dead abstraction.”

To me (& most of my friends), the idea of a “craze for abstraction” comes under the heading of NEWS, since The Paper of Record devotes most of its coverage of contemporary art to video, photography, performance art, representational art, presentational art, conceptual art and other forms of figuration. At the Times (to use a picturesque if antiquated phrase), abstraction is really sucking hind tit.

Recently, I saw exhibitions by two abstract painters whose work I consider well worth reviewing, even if the Times ignored both of them, and despite (or perhaps because of ) the fact that both painters are younger than I--in one case a lot younger and in the other, much more of a recent arrival on the professional scene.

The first of the two exhibitions, at McKenzie Fine Art, is entitled “Jason Karolak: Polyrhythm,” and closes today, on March 22. The second is “Dee Solin: New Paintings,” and it’s at André Zarre until April 4.

Because I want to reproduce work by both Karolak and Solin, I am going to divide this post into two segments, the first entitled “Similarities” and the second, “Differences” Much as I love the Authors Guild, which has created this website for me, they only allow me to reproduce one image per posting (as they are more into literature than art).

SIMILARITIES: QUITE A LEGION

Anyway, Karolak and Solin have quite a lot in common. Both were born in the leafy purlieus of at least somewhat affluent suburbia—Karolak in Rochester, Michigan (on the outskirts of Metro Detroit), and Solin, in Westport, Connecticut (an easy commute to the Big Apple).

Both have BFA’s from well-known art schools: Solin’s is from the San Francisco Art Institute, where Rothko & Still once taught, while Karolak’s is from Brooklyn’s own Pratt Institute, where fellow alumni include Jacob Lawrence, Robert Redford & Jules Feiffer (Karolak also has an MFA from the School of the Art Institute of Chicago, which has been called “the most influential art school in the United States”).

Despite their rural background, both artists, as adults, have become committed city dwellers, and even residents of the town so nice, they named it twice. Karolak lives and works in the newly-chic borough of Brooklyn, where our sainted mayor comes from; Solin, in the ever-so-slightly passé borough of Manhattan.

Both are relative newcomers to the New York art scene. Karolak was born in 1974, when Solin was already starting to paint, so in terms of age, he’s a generation younger than she is. On the other hand, in terms of professional exposure, she has had less than he.

Further key similarities: both are not only abstract painters, but more specifically devotees of geometric abstraction—a generic art form to which both artists manage to bring fresh twists.

Solin’s latest paintings are dominated by grids of small discs, marching firmly across the canvas, together with free-form arrangements of dancing smaller discs, and delicate bits of grill-work superimposed.

Both are – or can be -- splendid colorists. Upon predominantly black fields, Karolak’s superimposed images are painted with carefully coordinated greens, blues, purples, yellows and occasional reds that are sometimes suspiciously bright, but also sometimes delightfully mellow.

The fields upon which Solin ranges her brightly colored discs are themselves vivid panoramas of one color or another, ranging from a vivid blue, red or aqua to a less-successful yellow, then on down to a mild and modest grey or cream.

Both artists can be said to have responded to their natural environments. Karolak’s resolutely untitled cage-like structures distantly resemble the industrial and waterfront landscape either near his studio, or in the humbler sorts of parkland that he visits (Pelham Bay Park, or Jamaica Bay). What he sees in them remains a mystery, if only to the extent that his paintings bear no descriptive titles, only numbers.

Solin also sallies out of doors, but to her the Manhattan environment, with its crowds of pedestrians and vehicular traffic, is more about people than about landscape. Therefore she has looked skyward for the source of the paintings in this show. Its dancing discs evoke the sun, moon, planets and stars above---and this source is underlined by her titles, many of which allude to the cosmos.

At the same time, both artists—being abstract---have created abundantly ambiguous and multireferential imagery (as my regular readers know, I’ve dealt with this concept on other occasions as well.).

In addition to local landscape, Karolak’s rectilinear images suggest simultaneously to me many other visual experiences he must have had, from wickerwork chairs and/or baskets to mechanical wiring.

All this multireferential imagery, of course, is nothing the two artists most probably intended or even wanted viewers to be reminded of. Rather, it represents a synthesis of previous experience achieved on what Sigmund Freud would have called an unconscious level, and what modern neuroscience hasn’t yet gotten around to explaining (if I’m wrong, please somebody tell me what book I should have read).

It is only to be expected that the visual vocabularies of these two artists should differ widely, given not only the cumulative differences in their surroundings (stretching right back to their earliest experiences of seeing), but even more importantly, the differences in what for lack of a better term, I shall call their artistic personalities.

By this I mean the whole way they create art. But these differences are less significant than the way that the imagery of both are so rich in what John Elderfield has called “generalized allusions” to the natural world.

My final observation of similarities between Karolak and Solin includes the fact that both artists are obviously very seriously committed to the art of painting, and the further fact that the work in their two shows were created by elaborate processes, in both cases carried on through four separate campaigns.

In the posting below, I shall examine some signal differences, first in terms of what these processes consist of, second, in how they determine the final appearance of the pictures, and finally the way that these shows as a whole have been presented to – and received by – the art public.