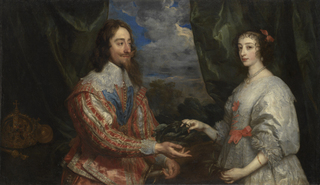 Anthony van Dyck (1599–1641). Charles I and Henrietta Maria Holding a Laurel Wreath, 1632. Oil on canvas. Arcibiskupský zámek a zahrady v Kroměříži, Kroměříž.
At The Frick Collection, though you may have to hustle before it closes, is “Van Dyck: The Anatomy of Portraiture” (through June 5). For those with eyes unblinkered by Duchampianism, this 17th century maestro offers a thoroughly admirable object lesson in how to please one’s contemporaries while also pleasuring generations to come.

Although the traditional hierarchy of the 17th century European academies listed portraiture second to history painting, in its way portraiture was an equally difficult task.

The artist had, of course, to satisfy the portrait’s subject, especially if the subject had commissioned it. This normally meant that the artist had to make that subject look at least as handsome or beautiful as that subject actually was.

On the other hand, the artist also had to render the portrait intelligible to third parties, meaning that the picture had to be faithful enough to reality to enable other people to recognize the subject’s features.

Thirdly, the artist had to observe the conventions and practices of the time in which the picture was painted -- the costumes, poses, accessories and backgrounds all recognizable and admirable by the standards of the day.

But if that artist cared about winning the admiration not only of contemporaries but also succeeding generations, the portrait had to go past mere representation to convey the inner life of the subject.

Equally or even more importantly, the painting had to convey the inner life of the artist – what made the image recognizable as that artist’s own handiwork, and memorable not only for its subject matter but also its composition and color.

Meeting all these qualifications and then some is the Flemish master Anthony van Dyck. Born in Antwerp in 1599, he apprenticed first to the painter Hendrick van Balen, but by his late teens was already assisting Peter Paul Rubens, Flanders’s most famous artist, on large-scale commissions.

Having never studied van Dyck, but being a great admirer of Rubens, I had always thought of Van Dyck only a follower of Rubens. Certainly, there is no denying Rubens’ influence on Van Dyck’s work—not least in its mellifluous color.

However, this show demonstrated to me that as a portraitist, Van Dyck may have been as good as, and maybe even better, than Rubens—precisely because his gentler, less assertive personality allowed more of his subjects’ personalities to shine through.

Said to be the most comprehensive exhibition ever organized around van Dyck’s activities as a portraitist, it shows off his accomplishments in this genre admirably.

Arranged chronologically, it follows the artist from his adolescence in Antwerp to his six years’ stay in Italy as a young man, during which he attained his artistic maturity.

Finally, it centers on his mature years in London, after he was appointed principal painter to Charles I of England and where he worked until his untimely death in 1641, at the age of only 42.

Composed of over 100 works, the Frick show was organized by Stijn Alsteens and Adam Eaker, both of the Metropolitan Museum of Art (though Eaker was formerly a guest curator at the Frick).

The remaining sixth are graphics, either by Van Dyck or after him by other print makers, mostly (though not entirely) displayed in the small “Cabinet” gallery on the street level (just past the entrance).

These graphics bear testimony to the widespread promulgation of Van Dyck's images, which spread his fame all over Europe and made him one of the most influential painters of his time.

Except for occasional studies of drapery, body parts & animals in the drawings section downstairs, most of the works on view are portraits of various kinds.

Nevertheless, there is a lot of variety. To a degree this has to do with the costumes and poses and props, but even more it’s in the overall compositions and above all, the people portrayed, so that I for one never got bored.

Particularly winning are two small oil self-portraits, done while Van Dyck was still a teenager and displayed in the downstairs gallery, along with most of the drawings.

And the drawings, as is so often the case (at the Frick and elsewhere) have a freedom and bite that the finished paintings only rarely share. One gets the feeling of “character” and freshness more often.

On the other hand, these drawings don’t have much color or the glossy and elegant finish of the Van Dyck oils in the museum’s main galleries.

All of these oils are lovely and very accomplished, but my favorite is “Charles I and Henrietta Maria Holding a Laurel Wreath” (1632).

According to the label, the original composition of this painting, showing the seated monarch and his queen, wasn’t Van Dyck’s but had been initiated by a Dutch painter also vying to win royal favor.

Van Dyck took it over and did such a brilliant job with it that he was knighted and appointed “principalle Paynter” to the king; the Dutch painter went back to Holland.

What I like about this painting is its delicacy, the feathery lace on Charles’s collar and the curls framing Henrietta Maria’s face, plus the bucolic landscape background.

The delicacy of the hands and fingers is also notable, but best of all is the evident fondness with which the king contemplates his royal consort, while she gazes out at us.

Romance in high life! Who can beat that combination?
Be the first to comment