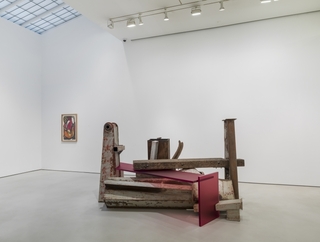 ANTHONY CARO. first drawings last sculptures. Installation view at Mitchell Innes & Nash, 2016. Photo: Adam Reich.
For their first exhibition of Sir Anthony Caro since his death in October 2013, his longtime New York gallery, Mitchell-Innes & Nash, has chosen to focus not just on his last work, but on the remarkable consistency that unites this last work with some of his earliest (through February 4).

The show is called “Anthony Caro: first drawings last sculptures” and it’s presented at both Mitchell-Innes galleries, with the smaller and more intimate presentation in their Upper East Side space (open Monday through Friday) and the larger and more ambitious one in Chelsea (open Tuesday through Saturday).

I visited the Upper East Side one first, and could see immediately how nicely this juxtaposition of early drawings with late (or at least later) sculptures works. On the walls are hung eight drawings done with brush and ink on newsprint, all from 1954—a period when Caro was just emerging from his tutelage with Sir Henry Moore and still very much an admirer of Picasso.

One of the eight drawings is entitled, “Figure,” but the others are all entitled “Bull” or “Baby with a Ball,” and it is not too hard to see inspiration here in the work that Picasso had been doing in the late 40s and early 50s.

On the other hand, Caro’s drawings show that they are very much the work of a sculptor who thinks in terms of carving an image out of a block, for the forms are twisted and distorted so that the images fill the picture space right up to their margins. And they go very effectively with the four sculptures placed in front of them.

Much is made in the handsome catalog, with its informative essay by Julius Bryant, of the fact that the latest work employs Plexiglas (which the British call Perspex) and that this represented yet another foray into new media (and new habits) for Caro.

However, of the four sculptures in the uptown gallery, only two are from 2011/2012 and utilize Plexiglas. Although I could see how at least one of them echoed the shapes in the drawings, I’m afraid that neither of them came off particularly well in their own right for me

On the other hand, the two sculptures here from the early 80s are not only lovely, but match up with the drawings behind them just as well. “Halved” (1980/81) is made only of bronze and brass, cast and welded, yet the aggressive little tubes in its lower front pick up the theme of the eyes in the bull in drawing behind it.

Also, there is a bigger hole through the middle of the welded sheet brass sculpture entitled “Sunlit (Table Bronze)” (1981/82). This somehow harmonizes like magic with the drawing entitled “Figure” behind it, even if the image in the drawing seems to be executing a somersault of some kind.

To see how Caro used the Plexiglas most effectively, it is necessary to go down to Chelsea, where in addition to seven more of the drawings, there are six more sculptures. These sculptures are mostly larger and mostly more successful—indeed, in four out of the six cases, more than worth the trip.
.
To be sure, one of them, “Honey Suckle” (2011/2012), is made entirely out of lithe slabs of bleached blond beech wood. This sculpture has no metal or Plexiglas, but with its verticals and diagonal horizontal, it works ideally with another one of the images from the “Baby with a Ball” sequence behind it.

Another winner is “Sackbut” (2011/2012), which greets the viewer at the entrance. Named for a Renaissance trombone, it has two upstanding halves of rusted and waxed steel, bisected by a vertical rectangle of clear Plexiglas.

“’Sundown” (2013) is a tall broad horizontal with a curved, neutral-colored sheet of Plexiglas rising above it, like the top-heavy back of a bison or bull. It goes just perfectly with the 1954 drawing of the full-bodied bull that accompanies it. The central form, according to Bryant’s catalog, was an old sand "hopper" (British for container), to which other scrap steel was added so that it no longer looks like a sand hopper at all.

Caro got his studio assistant, Neil Ayling, to extend all its old scars, like the grinding marks and rust stains, using chemical primer or acrylics to unify the piece. And if this show is any indication, the scars and stains of found objects in general seem to go better with the Plexiglas than fresh coats of paint.

Some of the drawings in this show were done in 1955/56, are entitled “Figure” or “Warrior” and are freer of the Picasso influence. By this time, Caro was already having his first solo exhibitions, but he was still a figurative artist—even attracting favorable attention from Lawrence Alloway, the critic best known for his championship of pop.

Most of these later drawings are colored in lovely red, tan and black—and a great match, especially, for “Terminus” (2013). Although not the last sculpture in the Plexiglas sequence, “Terminus” (2013) is the largest work on view and a fitting climax to the entire show. A long and powerful horizontal, with upstanding elements at either end, it has an under-body of frosted red Plexiglas.

Above the Plexiglas is a wonderfully pitted and aged slab of jarrah wood, presumably one of the old railroad ties to which the catalog alludes. This piece is integrated into other wood and metal elements, including the jib off an old crane.

The frosted red Plexiglas was chosen to pick up on the smears of red paint still peeping out from under the rust on the metal, and once again, Caro called on Ayling to unify the piece by extending the reds—so they look accidental, not planned.

It’s all so elegantly, beautifully done--the elegance that Caro was so gifted at combining with the massive. Delicate little twists and turns of the red paint embellish the metal—not only unifying the piece, but complementing the muscular shapes of the wood and the metal to create a full range of orchestral elements, from bull fiddle to piccolo.