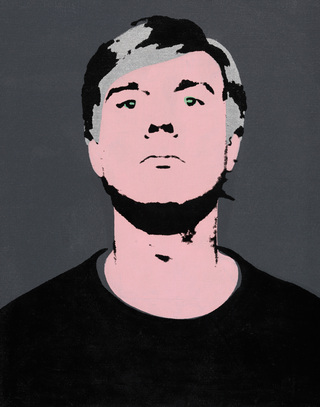 Andy Warhol (1928–1987), Self-Portrait, 1964. Acrylic and silkscreen ink on linen, 20 x 16 in. (50.8 x 40.6 cm). The Art Institute of Chicago; gift of Edlis/Neeson Collection, 2015.126 © The Andy Warhol Foundation for the Visual Arts, Inc. / Artists Rights Society (ARS) New York.
My second example of the triumph of personality as opposed to the gift for making great paintings is holding forth with appropriate fanfare at the Whitney Museum of American Art. It is “Andy Warhol – From A to B and Back Again,” and it is billed as the first Warhol retrospective organized in the U.S. since the one at MoMA in 1989. It will be playing at the Whitney through March 31, 1919; then at the San Francisco Museum of Modern Art, May 18 through September 2, 1919, and the Art Institute of Chicago, October 20, 1919 through January 26, 2020. But you really should have seen the media preview in New York. That was a show in itself!

Normally, at Whitney media previews in its new Gansevoort Street building involve placing a ten or fifteen rows of seats, seating maybe 60 or 80 members of the media, in the galleries where the show is actually taking place.

For this event (to which one had to RSVP) the museum’s press office concluded that the far more capacious entry lobby would be necessary. They were so right.

By my estimate, this event provided seating for between 150 and 200 people, and the event was SRO. Not only was every seat filled, but people were lined up against the wall to the north of the seating area, against the bookcases to the south of it, and to the east behind it.

To be sure, some of these spectators were charming young ladies, usually if not always in black, who were museum employees, and some people at the back were armed with TV cameras on tall tripods: they wouldn’t have wanted to be seated. All the rest clearly would have liked to sit but couldn’t.

And this was Election Day, with some of those charming young ladies discussing how long they had had to stand in line to vote!

First up at the podium was Whitney Director Adam Weinberg. He went rapturously on and on about what a “stunning” show this was and what a major, major “complex” and “subtle” figure was Andy Warhol, born “the child of immigrants” in 1928, and dead of complications from gall bladder surgery in 1987 at the age of only 58.

The exhibition, with more than 350 works of art, said Weinberg (in the press release, where I can be sure I get his exact wording right) affords viewers an opportunity that few have had before to see “an in-depth presentation of his career, and account for the scale, vibrant color, and material richness of the objects themselves….

“This exhibition…will allow visitors to experience the work of one of America’s greatest cultural figures firsthand, and to better comprehend Warhol’s artistic genius and fearless experimentation”…

After ringing changes on these evaluations from the podium, and emphasizing that the show included both material objects and extensive screenings of Warhol’s movies, Weinberg introduced the museum’s Donna De Salvo, who organized the show with the aid of Christie Mitchell & Mark Loiacono.

According to Weinberg, De Salvo was “one of the last remaining curators who worked directly with the artist.”

This didn’t impress a knowledgeable friend of mine whom I ran into after we all went upstairs to see the show itself. According to her, the woods were full of people who claimed to have lunched with Andy the day before he died…..

De Salvo herself scaled back Weinberg’s claim by saying that although Warhol was “a touchstone” for her, she hadn’t known him “that well or that long….”

If my notes are to be believed, she rhapsodized about his “prescient technological experiments” and said that his “power” was “really extraordinary.” She did her best to rebut those critics who suggested that his art was superficial, adding that “If you dig deep, you are going to be rewarded.”

And I believe it was she who attempted to argue that the later Warhol was more profound than the early.

In closing, she argued that Warhol had an especially good understanding of two great American traits, “innovation and conformity,” observing that both of these seemed particularly relevant on Election Day 2018 and urging everybody to vote.

I myself never met Warhol or reviewed any of his exhibitions. By the time I started writing the Art page on Time, in 1967, he was no longer showing art objects in galleries, but (to the best of my knowledge) devoting himself to movies.

That being the case, his career fell into the bailiwick of the Cinema section of the magazine.

I shall honor that division in this review, as I’m not into art movies, with hand-held cameras and all that good stuff at which Andy and the minions in his Factory may have excelled.

Well, and so what about the show of all Andy’s paintings and other objets d’art? They occupy the entirety of the 5th floor at the Whitney, and are introduced by a huge example of one of Warhol’s “camouflage” paintings from 1986. If these are the ones that qualify as more “profound” than the early work, you’ll never prove it by me.

With its repetitive designs, imitative of the coloration of U.S. Army uniforms and materiel, this sequence strikes me as one of Warhol’s attempts in his later years to create “abstract” paintings.

Other attempts include his “Rorschach blot” paintings (which deliberately contradict what Rorschach blots really do), and his “oxidation” paintings (made by urinating onto canvases laid flat and treated with chemicals that changed color upon the application of the pee).

None of these attempts to crack the abstract market are very interesting to look at, at least to a spectator like myself who has devoted so much of her career to the study of really good abstract paintings.

Not one of them (as far as I know) has ever gotten off the ground, in terms of sales or publicity either.

The best parts of the show are the first two galleries. The very first consists of multiple- panel renditions of several motifs that made Warhol famous in the early 1960s.

The soup cans, the coke bottles, and the Brillo boxes all demonstrate his demagogue's genius at exploiting popular dissatisfaction.

The multiple Marilyns, Jackies and Liz Taylors come along a little later in the show, but are part of the same shtick .

I mean, look at the way things were, back around 1962. For more than a decade, U.S. art lovers had been forced to accept abstract expressionism as the reigning avant-garde, and in retrospect, a very large percentage of them appear not to have liked it very much

They knew it was very high-minded, attractively colored, and supposedly rich either in "content" (as opposed to subject matter) or existential nothingness (depending on whether they listened to people who read Greenberg or people who preferred Rosenberg).

But they couldn’t understand it with their logical, rational minds. They couldn’t describe in words what they were seeing on the canvas, or see any relationship between it and the world around them.

It must have been a very frustrating situation for all the good people who wanted to love art, to look at it and even collect it, but lacked the visual sensitivity and training to be able to respond to a painting upon the basis of its shapes and colors alone.

Then POW! Along came Andy, and Roy Lichtenstein with his comic strip-paintings and suddenly critics like Lawrence Alloway were gloating over this “new avant-garde” called POP.

Suddenly, the art scene was fun, fun, fun – with a number of other populists to join the lineup: Johns, Rauschenberg, Oldenburg, Rosenquist, etc. Sales of art picked up. Happenings happened. People flocked to the galleries and museums showing this oh-so-entertaining figurative art, while contemporary abstraction (at least, the best of it) was forced at best to co-exist in a new and different environment.

That, boys and girls, is how postmodernism took over the scene. And Andy Warhol, in my opinion, was perhaps more responsible than anybody else, for leading the charge.

But was he really that good as a picture-maker or was it his talent for colorful hair, cryptic sayings, and a retinue of curious acolytes that constitute his real claim to fame?

When you stop to think about it, you may realize that all his most celebrated images from the early 60s (as well as the less-celebrated ones, like the dollar bills and the S&H green stamps) are variations of the same formula, the same more or less vigorously retouched photographs, individually or in grids.

Dare I call him a One-Note Johnny (though of course, one could say the same thing of Pollock)?

In its weird way, the second gallery in the Whitney’s current show answers the question of Warhol’s underlying talent quite admirably.

This gallery is devoted to when Warhol was still a highly successful commercial artist and illustrator, back in the 1950s, when he was still doing advertisements for expensive shoes and seasonal decorations for articles in fashion magazines like Harper’s Bazaar or Vogue.

Everything in this gallery is very nicely done. And there is no doubt about it: this was a very pretty little talent at work.