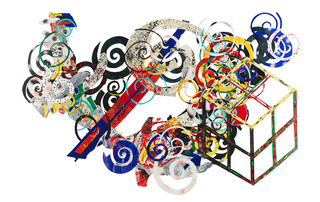 Al Loving, Barbara in Spiral Heaven, 1989. Mixed media on paper. Collage. 93 1/2 x 141 inches. Courtesy the Estate of Al Loving and Garth Greenan Gallery, New York
May 21 was a good night for openings. I got to two, both at 529 West 20th Street. The one I'd come to see, and will discuss below, was “Al Loving” at Garth Greenan (through June 27). The other was “Shades of Paint”, a multifaceted group show at André Zarre (through June 24).

"Shades of Paint" features a number of talented abstract painters, among them Randy Bloom, Dee Solin, Ellen Banks & Fred Gutzeit. The human link uniting these shows was Margery Mellman, the artist, whom I ran into at the Loving opening, and who told me about the one at Zarre.

The Loving show is only the second in this same space since the artist’s death in 2005 at the age of 69. In December 2012, loose fabric pieces from his middle period of the 1970s were put on view here by Gary Snyder, Greenan’s predecessor gallery. It, too, was a splendid show.

In writing about it, I dealt at length with the artist’s background and education. At this point, among my readers anyway, I feel that his name speaks for itself. Not that there isn’t a world of difference between that show and this one—which, in its own unique way, is even fuller of challenges and pleasures.

Though it may sound odd, what’s on view now is vigorously sparkling while at the same time being modest and unpretentious. Yes, the work in it represents the artist’s most mature, even Augustan period from the late 70s and the 1980s, but that’s only the beginning of what makes it unique.

Everything is soldered together and elegantly colored, with multiple hues that range from the subtle to the rowdy. All these shapes and colors are further glorified by bits of glitter and overlays of shiny lacquer. Truly, this is a feast for the eye.

So where is the modesty, challenge and unpretentiousness? Partly in the size and number of these wonderful amalgams: there are only seven of them in the show, of which four are not at all large. This is not to say the gallery looks empty: quite the contrary, these seven pieces somehow manage to occupy it fully.

But even more surprisingly, the eye is challenged by how these works are mounted—or, to be more accurate, not mounted at all. They don’t have conventional matting under them, let alone glass to cover them or frames to surround them: instead they simply cling flatly, simply, innocuously to the wall.

It’s hard to say which pieces are best. Three of the smallest most seduced my eye. “Bethune Street #1” (1978-79) is one of them, a slender vertical, a bit like a staircase, done in a mix of bright and dark colors—browns, grays, yellows and blues.

“Sag Harbor Eastville Evening” (ca. 1978-79) is shaped like a small upward-flying bird, its body a dense tangle of subdued grays and deep golds.

“Untitled” (c. 1980) is the smallest, only 32 inches high but more gaily colored, with a lot of red across a looping top that is perched in a sprightly fashion on a blue spike.

Biggest, brightest and most ambitious is “Barbara in Spiral Heaven” (1989), a gloriously complicated combo of red, green, two blues (light and dark), yellow, black, and white—with polka dots on the white, glitter and a horizontal dynamism complemented by upward soaring diagonals.

All in all, a memorable show.
Be the first to comment