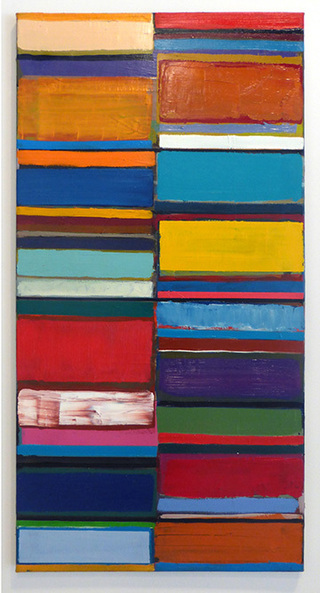 Tegene Kunbi, Danjerus Cable, 2015. Oil on canvas, 39 x 19 inches (100 x 50 cm). Image courtesy of Thatcher Projects, New York
We've had so many good abstract shows this spring that I must double up on some of them in order to catch at least a few before they close. Here I introduce those of Simon Hantaï at Mnuchin (closed June 26) and Tegene Kunbi at Margaret Thatcher Projects (up through July 17). To say nothing of some links well worth pursuing.

The show at Mnuchin was “Simon Hantaï—Pliage: The First Decade,” and celebrated the most distinctive achievements of an artist was born in Hungary in 1922 and died in Paris in 2008.

After studying throughout most of the 1940s at the Academy of Fine Arts in Budapest, Hantaï immigrated to Paris around 1948. First came a brief flirtation with the surrealists, when he was indulging in more or less fantastic figuration. Then he launched into that sea of Parisian versions of American abstract expressionism, known variously as tachisme, l’art informel, “lyrical abstraction,” “matter painting,” and so on.

Next, around 1960, as the vogue was shifting towards Nouveau Réalisme, Hantaï embarked upon his most individual form of abstraction, which he called “pliage” (folding). Taking initial inspiration from Pollock, he laid his unstretched canvas on the floor. He then folded and knotted the material before painting its rumpled surface.

The process was not unrelated to tie-dyeing, but he seems to have used heavier paints, so they sat upon the surface instead of sinking in. When the canvas was unfolded, the painted areas were interspersed with unpainted ones—which could either be left unpainted or painted with contrasting colors.

The effect created by Hantaï during these first few years could be almost magical, with panoplies of these small, subtly colored and irregularly-shaped areas interspersed with what almost seemed like their mirror images done in harmonious or contrasting hues.

They were seen to good effect on the ground floor of Mnuchin, which featured four excellent paintings, all done between 1960 and c. 1964. Best was “Mariale m. b. 2” (1960-61). Here, a delicate yet muscular effect was created by myriad small shapes of pale green, and little to contradict them in the interstices surrounding them.

Also quite wonderful was “Mariale m.d. 4”(1962), which combined larger and more vividly contrasted jagged areas of tans and greys, plus bits of white and dabs of blacks.

The “Mariale” in the title of this series was meant to refer to the veils of the Virgin Mary, and two other works from this period on the ground floor of the gallery were also well worth the viewer’s attention, “Mariale m.c. 7” (1962) and “Peinture” (ca.1964).

Alas, the second floor of the gallery, displaying later paintings, was a disappointment. In the rotunda area and the back gallery were pictures dated between 1964 and 1968, and returning to the more traditional format of figure-and-ground.

None of the single large shapes in the center of each canvas were meant to resemble any specific subject, but two looked like large & boring gemstones, while the remainder suggested Matisse cutouts, Ellsworth Kelly floral designs, or abstract paintings from the 60s by Jack Youngerman.

Weaker still were the four “Études” in the front gallery on the second floor, done between 1968 and 1971. Here the artist had apparently returned to his “pliage” technique, but with only one color per canvas set upon a plain white field.

All the subtlety, unending labor and passionate attention to detail that so distinguished the paintings on the ground floor of this exhibition had been leached out, leaving a slick and empty prettiness.

They reminded me of those cute red-white-and-blue “Hourloupe” sculptures that Jean Dubuffet was making at about the same time and likewise in Paris—not that the two sets of works looked like each other, just that they shared an esthetic of anticlimax.

I was reminded of a poem by John Donne that compares the progress of a love affair with the progress of the sun across the heavens, and the shadows therefore cast. This poem concludes, “And his first minute, after noon, is night.”

The sun has yet to pass high noon with the career of the artist represented in “Tegene Kunbi: Danjerus Cable” at Margaret Thatcher Projects (extended through July 17). Born in Ethiopia in 1980, Kunbi is still only in his 35th year.

After receiving his BFA from the University of Addis Ababa in 2004, he continued his education at the Universitȁt der Kűnste Berlin, and continues to be Berlin-based.

This is his second solo exhibition with Margaret Thatcher, and the explanation for its title (which is also the title of one of its finest paintings) is something he has yet to share with his gallery. Never mind. The radiance of his color schemes more than compensates for the mystery of some of his titles.

(After all, are not the titles employed by most abstract painters equally mystifying, handy as they are to differentiate between the paintings---and, as such, vastly preferable to designating paintings solely by numbers?).

Kunbi’s chosen vehicles of expression in this exhibition are stripes of many different colors. It might appear as though stripes are an overly familiar vehicle, having already been employed with such magnificence by Kenneth Noland, as well as by lesser artists like Gene Davis, Bridget Riley, & Gerhard Richter.

For one thing, his paint surfaces are rougher and freer (he works with a mixture of rollers and brushes, and often on several paintings at one time). There is a real textural interest here.

For another thing, he pairs his vertical piles of stripes, or sometimes gives us a triple set of piles—two wider ones at either side of his canvases, with a narrower pile in the center.

He varies the width of his stripes, sometimes making them slender and sometimes, broad. Occasionally, he will extend one of his bigger, broader stripes clear across the canvas, uniting the piles of stripes on either side. And occasionally, one stripe will overlay another--with all the little irregularities that shout to the world that these paintings are handmade.

“Fireeater” (one of Kunbi’s medium-sized canvases, and done in 2015, like all the work in this show) has a lot of reds in it.

Similarly-sized “Ton Load” has a lot of yellows and blues.

“Lala” and “Temperature” are the two biggies in the show (each measuring 79 x 63 inches). The former, facing the entrance to the show, has a big, bold stripe of red clear across its bottom. The latter (on an inside wall) has accents of red and yellow, but is mostly blues and greens, deeper colors including purples.

“Danjerus Cable” (the painting for whom the show is named) is tall and narrow, with many, many colors (maybe reminding one of the Biblical Joseph’s coat of many colors) but not that big.

The gallery’s press release describes Kunbi’s color palette as “a powerful translation of his African roots…” Aha, I thought, are we talking Ethiopian rugs? But when I looked for Ethiopian rugs on google, I found none with such brilliant colors.

I did find the kind of Mexican serapes worn as shawls that had more in common with the color schemes in this show—not that I think Kunbi looked to them for inspiration, either. It’s just that stripes are a lingua franca—a truly international language, in folk and popular culture as well as high art.

I realize such terminology must sound terribly quaint and old-fashioned in an era when it is commoner to describe works of art as "things" or "objects" rather than works of art, but I see a very real difference here--one that all the silk-screened soup cans in creation can't erase.

Creating a handmade serape must be a difficult and demanding task, requiring the highest skill, but somehow employing oil on canvas – the way that Tegene Kunbi does -- still produces a work more capable of flexibility and enchantment, hence more capable of evoking that peculiar elation which we call the esthetic emotion.

There's no single, regular pattern in any of his paintings. Though all share a commonly keen & vibrant sense of color, each has little details of shape, size, color choice and paint applicati0n that renders it unique--and this helps to make the show, as a whole, far more capable of giving the viewer an enviable high.

AND NOW, TO SOME LINKS

In the past week or so, my email correspondents have sent me links that I’d like to share with my readers. Two came from Patricia Lewy Gidwitz, the art historian and Mozart scholar who is working on a monograph about Friedel Dzubas (and whom I mentioned in my April 26 posting on the two Dzubas shows this spring).

The first of these links is to the annotated text of an essay that Clement Greenberg wrote about Dzubas. The essay itself originally appeared in 1977 in an obscure German exhibition catalog, and is not included in any of Greenberg’s collected writings.

The second is a formidably-researched article by Lewy Gidwitz on Dzubas. It contains much material which may come as a surprise to the artist’s many admirers (as I know it did to me)