SMOLDERING, CHEKHOVIAN, + A LINK TO LINK 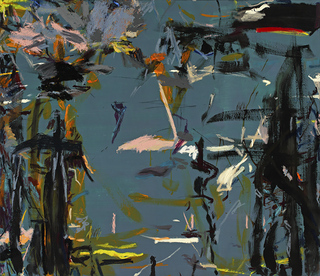 Philip Gerstein, Ysabel's Table Dance (composite alternative take), 2007-2012. Oil stick & acrylic on canvas, 54 x 63 inches. Courtesy of the artist.
Again racing against the clock, I present two more shows by abstract painters I’ve seen and admired: “James Little: Color/Barriers, Recent Work” at June Kelly in SoHo (closed June 23) and “Being There: Abstract Paintings of Philip Gerstein” at André Zarre in Chelsea (through July 29). Plus a link to a lively article by John Link.

James Little is best known for good-sized, brilliantly-colored and almost obsessively intricate geometric abstractions. They are mostly built around vertical stripes, but those stripes alternate with vertical zigzags, tall narrow chevrons and other related shapes.

In reproduction, the paintings may to tend to look a bit sedate, but in person, the best of them have a kind of smoldering intensity. They convey a feeling of fires carefully banked lest they break out into blistering flames.

Not least, this effect is achieved through the painstaking way that these paintings have been executed. Little only paints four or five of them per year, as the careful application of these paints that combine oil and wax together requires months to do right.

This combination of media gives the surfaces of the paintings a voluptuous satiny quality that belies the rigor of their geometry.

A native of Memphis, Tennessee, Little received his BFA from the Memphis Academy of Art in 1974, and his MFA in 1976 from Syracuse University, the alma mater of Clement Greenberg (BA, Class of 1930)

Currently, Little lives and works in the Big Apple. This was his 18th solo exhibition since 1976, and his 13th in New York.

On occasion, he has cited Greenberg as an influence. He has also said that patterns on shirts and the work being done by commercial artists whom he studied with in art school played into his sensibilities.

The truth seems to be that – like other gifted artists – he takes what he wants from a myriad of sources and synthesizes them into his new whole.

This year’s show at June Kelly consisted of 5 paintings with more or less familiar stripe-and-variations patterns, but with a paler palette than I can remember from previous exhibitions. All were identical in size: 6 x 8 feet.

The best were “Too Close To Call” (2015), dominated by subtle combinations of mustard and orange; “Ju Ju Boogie Woogie” (2013), with cooler colors at its center and hotter ones at its extremities; and “Darwin’s Dilemma” (2013), with the most harmonious combinations: apricot, pinks, grays and greens.

Finally, one painting blew the lid off the cauldron and afforded a glimpse of what lies beneath—which turned out to be not flames but a velvety black. Done in 2014, this painting was 5½ feet square, and divided up into four equally-sized smaller squares, all black on black.

Lightly delineated in this darkness were delicate patterns of diagonal stripes on horizontal pointed shapes. Perhaps the cryptic mysticism of Ad Reinhardt was an ancestor here, or the powerful blacks that Goya & Velázquez excelled at.

Still, given the fact that Little is an African-American, it may be that this painting was more nearly inspired by recent outbreaks of lily-white racism in America. Its somewhat topical title: “The Most Common Enemies.”

Anybody who knows their Chekhov knows that Russians can write gloomy plays. Those plays can be so gloomy, in fact, that George & Ira Gershwin worked a reference to their “clouds of gray” into that Tin Pan Alley standard, “But Not For Me”.

This doesn’t keep Chekhov from being revered as one of the fathers of modern theater--nor indeed are gloomy paintings necessarily inferior to cheerier ones. People used to tell Mark Rothko that his paintings moved them to tears, and he liked that resp0nse very much.

By the same token, the subdued and subtly gloomy abstract paintings of Philip Gerstein, a Russian from Moscow who has been living and exhibiting in the Boston area since the 1980s, aren’t kept by their gloom from having – at their best – a distinctive & interesting style of their very own.

In the show at Zarre, the artist can’t seem to decide when to employ his distinctive style and when to abandon it for other experiments. Even his media are mixed: he works with all sorts of combinations of oil stick, chalk, acrylics, pastel, collage and what not – on canvas, wood panel or paper.

Sometimes these combinations lead to pictures scribbled far too thinly, and looking underdone and empty as a result.

On other occasions, mixtures of media are slathered on with the overdone, confused sort of brushwork that characterized the so-called “gestural” painting of the 1950s, when nearly everybody in New York was aping Willem de Kooning. (A lot of people think very highly of "gestural" painting and de Kooning's versions of it. I just don't happen to be one of them.)

Sometimes, of course, Gerstein, in my opinion, gets the mix just right-- or I wouldn't be reviewing his show.

This artist's show occupies two spaces at Zarre. One space has larger (though still not very large) paintings on panel or canvas. The other space has smaller works on paper.

The one with the smaller works seems better organized, with more consistency and a dash of gaiety. None of these pieces are overladen with paint and none are overly empty.

The best of the lot here is “Kissing You” (2011-2014). Mounted on thick and handsome handmade paper, it’s very evenly covered with broad horizontal strokes, and employs a limited but attractive color scheme, with lots of soothing white and many reds.

Also in this space and nearly as attractive is a Klee-like image called “The Age of Discovery” (2011-2015). This one is on a handmade printed paper with little black and white floral designs that help to pull it all together. I found it kind of cute.

Much as I liked both of these, however, they don’t seem to be what Gerstein wants to be known for. The larger works on canvas or panel in the other space are evidently those on which he really stakes his claim to fame.

He seems particularly committed to “Libertad Y Alegria” (2012-2014). It is reproduced upon the invitation to the show, and he sends it out to critics who request an image, regardless of whether or not this image is the one they asked for.

To me, “Libertad Y Alegria” is very characteristic of gloomy Russian theater, possibly because it incorporates a color scheme I’m not at home with. In the center is an area of murky orangey yellow, and into this center protrude sharp stick-like forms in mint or acid-greenish blue.

These color combinations strike me like the visual equivalent of the squawk of a fingernail scraped across a blackboard, while the void at the center of the composition leaves me similarly nonplussed. Maybe “provocative” is the right word for it???

At any rate, this painting is more distinctively Gersteinian than either of the two smaller works on paper that I cited. One does get some feeling for his whole esthetic outlook from it.

A less provocative painting in this vein is “Universe in a Grain of Sand” (2014-2015). True, it’s a bit empty over to the right, but otherwise it’s quite lovely, with dominant reds and bustling sweeps of greens and blues and black.

The painting I liked best, both for its own quality and because it seems to best represent the painter’s intentions, is “Ysabel’s Table Dance” (2007-2012). It is blessedly simple in its media: only oil stick and acrylic on canvas.

Although the colors are distinctive, they are soothing instead of grating. In the center, and furnishing the background for the rest of the picture, is the gentle area of a muted, faintly greenish blue.

The official name of this painting comes from a Charlie Mingus recording (like James Little, Jackson Pollock, Randy Bloom, Roy Lerner & God knows how many other artists, Gerstein is fond of jazz--in this particular case, with a Latin accent). But that greenish blue looks to me more like water.

To the right and left are vertical strokes of black, which remind me strangely of reeds or cattails rising out of this water, while the sweet little pinkish shape in the center, with its long neck lifting up from a floating body, looks to me like a cross between a swan and a flamingo.

Further brightening the picture are neat little floating accents of yellow and orange. Maybe fireflies in the dusk?

Horrors! I know I’m not supposed to see imagery in an abstract painting. Then again, curiously enough, it only heightens my pleasure at the sight .

A LINK TO LINK

For those who think I’m too soft on postmodernism, I am happy to provide a more stringent alternative. Below is a link to an article by John Link, Michigan painter, critic and professor emeritus, that really takes everything we know and loathe to the cleaners. It was originally published in hard copy in the latest incarnation of the New Art Examiner, but fortunately for my readers, it is now also posted online. So – here is the link (if you find the print too small when you access it, there’s a zoom mechanism somewhere in its screen):

Thanks Piri, While I never thought I was taking po-mo to "the cleaners", upon rereading myself, it seems like a case of the shoe fits, and fits rather well.