POLLOCK AT MOMA: THE BEST SHOW IN NEW YORK 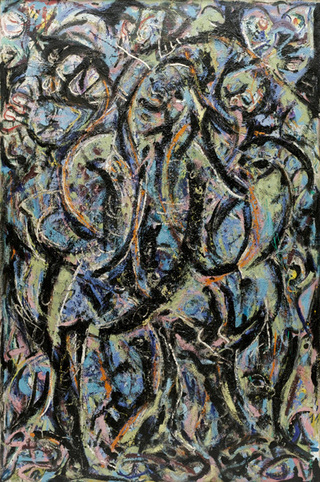 What MoMA has done is haul out and put on view almost every last single work by America’s greatest painter that it owns and hung them all together.

There are 58 of them, including 17 (mostly oil) paintings (on various grounds), 32 prints (lithographs, silkscreens, etchings with drypoint and/or engraving), and 9 individual works on paper (ink, watercolor, gouache, pastel and various combinations thereof).

The result is one hell of a great show.

The show takes place in three galleries, labeled “early work,” “transitional work” and “mature work,” but the level of finish in even the earliest gallery is mature and leaves very few loose ends showing. Here was a man who even in his younger years knew how to put a picture together!

This is obvious with his largest and best-known work from this period, “The She-Wolf” (1943), which always manages to look bigger and brighter and most lucidly-colored than I remembered, every time I see it.

But it also applies to smaller and less familiar gems, like “The Flame” (ca. 1934-38), with its licking fires of red, black and white, and “Circle” (ca. 1938-41), with its tightly-wound, all-inclusive mélange of Mexican and Jungian mythology.

Also in this gallery and the next are generous displays of the web-like & prophetic graphics that Pollock was executing during his earlier years, including those made at Atelier 17 under the tutelage of Stanley William Hayter, who even then was coaching the young American in surrealist automatism.

A great virtue of such a presentation is that it brings together graphics and paintings, works from different departments in the museum that might not ordinarily be seen together, and allows the viewer to see how Pollock worked from one medium back to the other, trying out new ideas for the other in each.

The second gallery in this grand show is more familiar, with the vibrant
“Gothic” (1944) greeting the viewer entering this space, with its small jagged arch shapes and affluent palette of blacks, pale greens, and blues, highlighted with pink.

A second highlight of this gallery, though again it has many other wonders is the sunny, summery “Shimmering Substance” (1946), a relatively small picture from the artist’s “Sounds in the Heat” series. With all its small yellow and white circles, this painting shows him luxuriating in the fresh air of the Hamptons, and rejoicing at leaving the temptations of the big city behind.

Claiming a central space (with the only bench in the exhibition in front of it) is perhaps my personally favorite Pollock, “Full Fathom Five” (1947).

Practically perfect, it always amazes me by its scale (more than 4 feet high),and its dynamic sea-greens and blacks, skeined with white on top it and really not a transitional picture at all – as mature as anything Pollock ever painted.

How thoughtful of Peggy Guggenheim to give MoMA this great painting in 1952!

The third gallery is of course the one that shows the Pollock everybody is most familiar with. It is dominated by the huge & magnificent “One: Number 31, 1950” (1950), one of the three great masterpieces from Pollock’s 1950 show (the other two being “Lavender Mist” at the National Gallery, and “Autumn Rhythm” at the Met).

Which of the three is the greatest? Personally, I prefer “Lavender Mist” but “One” is terrific, too, with its superbly sophisticated palette of black, white, pale olive and pale khaki—discreet colors that allow the radical facture and line to be seen at their best…..

Also in this gallery is “Number 1A, 1948” (1948), in 1950 the first poured painting to be purchased by any museum (though MoMA had purchased “The She-Wolf” earlier, it isn’t nearly as radical a picture). “Number 1A, 1948” is a topnotch painting, too, and at nearly 9 feet across, a very large painting for any museum to venture with at that time.

Also in this gallery is an interesting “White Light” (1954), one of the artist’s last paintings, and “Easter and the Totem” (1953), seductively-colored in apricot, pale magenta and pale green and maybe sort of representational (though what it represents eludes me).

This painting, along with “Circle,” “Gothic” and one other painting, plus a raft of graphics, were given to MoMA by Lee Krasner Pollock – 27 works in all out of the 58 in the show.

All were given between 1967 and 1988—that being almost exactly when William Rubin was acting as chief curator of painting and sculpture, and effectively setting policy for the whole museum.

In fact, 42 out of the 58 works in this show came to the museum during Rubin’s period in office (including “One”).

Alfred Barr, Rubin’s predecessor at MoMA, couldn’t believe that the mainstream had crossed the Atlantic. Throughout the 1940s and 1950s, he was acquiring work by the French tachistes and creators of l’art informel instead of anything beyond token work by the American abstract expressionists.

Believe me, I have checked this out in “Painting and Sculpture in the Museum of Modern Art, 1929-1967,” by Barr himself.

And the people who have been in charge at MoMA since Rubin can’t be bothered with all this ancient history (even if the museum could afford to buy a Pollock today—unlikely, since Bloomberg recently reported that a Pollock was sold privately for $200 million this past fall).

So – all in all – Pollock fanciers owe Rubin a debt of thanks – even if he and Greenberg weren’t on speaking terms after about 1969.