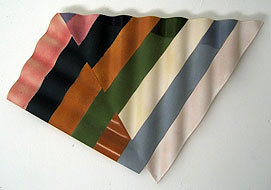 The show at Castelli in Manhattan was “Kenneth Noland: Color and Shape, Paintings 1976-1980.” It consisted of seven shaped canvases, four in the front space of the gallery, three in the back.

In all cases, they were distinguished by this artist’s impeccable color sense, but the palette was somewhat muted – not as bright as the brightest of his “stripe” paintings of the mid-60s, but not as pale as those done near the end of that decade, either.

The three I liked all had six sides, and were taller than broad. The largest areas, in the centers, were painted one solid color, and three of the six sides were trimmed with narrow stripes in contrasting colors.

Best was “Dusk Affair”(1977). It had a deep gray center, deep red and blue stripes on the lower left side, stripes in two shades of lighter blue on the right, and stripes of pinkish beige at the top. The whole measured 74 x 70 inches.

Second best was “Angle of the Night”(1978). Almost as tall but narrower, it measured 72 x 50 inches,with a deep grayish brown center and green and white stripes at the bottom, pink, blue and white at the top, and bright red over to the right.

Third on my hit list was “Apace” (1981). This was even taller and narrower, 79½ x 32½ inches, and brighter, with a maroon center. It had two long orange stripes down the left edge, a shorter medium blue one up the right edge, and short yellow and green stripes across the top.

Altogether, a very good-looking show--and, for readers on the West Coast, a very similar one is still on view at Honor Fraser in Los Angeles, through August 29.

A kind friend of mine, Carla Rich, invited me out to her house in Southampton for a couple of days. As I was allowed to pick those days, I chose to come during two of the three big art fairs in the Hamptons.

The two I attended were “Art Southampton” at the Nova’s Ark Project, and “Market Art + Design” at Fairview Farm. Both were in Bridgehampton, on the weekend after the Independence Day weekend.

Both boasted large, airy spaces and many booths, but practically no color-field paintings, and especially none very worthy of notice from the greats of the 60s.

Aside from that, both pretty much fit the mold of the alternative art market as Darby Bannard and I defined it in my report on this past winter’s art fairs.

In other words, there was much art for people who want something nice-looking to hang in their homes, but little if indeed anything that would fit the rubric of “cutting edge,” as defined in Chelsea or at the Armory Show.

At Art Southampton, I found many booths showing prints and photographs, and only three galleries that I want to mention: a) Sponder, which has branches in Miami, Boca Raton & Oyster Bay Cove, Long Island; b) Berry Campbell, of New York and c) Jerald Melberg, from Charlotte, North Carolina.

I had been advised that Sponder was showing Stanley Boxer, and indeed I found four paintings by Boxer there, but the two I liked best were smaller ones, hidden away in a kind of closet. Prominently displayed was one of my least favorite paintings by Dan Christensen.

Berry Campbell was showing all eight of its “Artists of the East End,” in other words, painters who had lived or were still living in this part of the world. They were Christensen, Susan Vecsey, Raymond Hendler, Eric Dever, Syd Solomon, Charlotte Park, Balcomb Greene & Perle Fine.

Melberg’s booths I have always enjoyed when I’ve seen them in previous fairs, and this one didn’t disappoint, either. Among its joys were a small & lovely Frankenthaler watercolor & gouache, one of several studies for the cover of the Frankenthaler monograph by Barbara Rose (published by Abrams around 1971).

Also a wickedly lively little Hofmann gouache of a sea monster, two very nice (if late) collages by Esteban Vicente, and five works on paper by Motherwell, the best being an “Untitled (Ochre, Black, Green)” in acrylic and charcoal, done in 1968.

“Market Art + Design” was much more pleasantly situated, in a large covered space overlooking Mecox Bay. On the sunny day I was there, the refreshment stand was located outdoors, on a pretty green lawn, and visitors were sitting comfortably & eating at long tables shaded by umbrellas.

Although I again noticed lots of less ambitious work on view, Gallery Sam had its usual robust collection of real paintings, all abstracts and most of them, brightly colored.

Among them were works by Francine Tint, Richard Anuszkiewicz, Louise P. Sloane and some newbies, including Timothy Roepe, a onetime docent at the Pollock-Krasner House who creates spatter paintings by throwing rocks at the canvas.

The most impressive picture on view was “Belle Sauvage” (2009), a large Roy Lerner dominated by golden tints—a familiar approach for Lerner but very well done.

I also seemed to notice more galleries showing work created earlier than just yesterday. The best I discovered just as I was leaving, although it actually faced the entrance.

This was the huge space occupied by Bernard Goldberg Fine Art of New York, probably three times the usual space of a booth and – true to the title of this art fair—featuring “design” as well as “art.”

In the “art” category were lots of pictures and sculpture from the earlier part of the 20th century, including fine pieces by Charles Burchfield, Oscar Bluemner, Harry Bertoia & John Sloan.

But what really seduced me at this booth was the “design” at its entrance. This was a pair of large, ornate black wrought iron doors created around 1927 by Samuel Yellin, a celebrated master blacksmith born in Poland & based in Philadelphia.

These doors were for the entrance to the new offices of J. Walter Thompson, one of the world’s largest advertising agencies, in the Graybar Building (next to Grand Central).

My mother used to work in those offices, back in the 1940s! I was just a child, but I can remember visiting her there. I must have walked through those doors myself, and she would have, every day.

The show at the Pollock-Krasner House & Study Center in Springs was “Neil Noland: Sculpture of the 1980s.” With its display of 13 glazed ceramic reliefs and four free-standing steel sculptures, it honored the third of four sons in the Noland family, a sculptor who became a familiar figure on Eastern Long Island.

Harry was the oldest Noland boy, Kenneth was the second, and Neil was the third, born three years after Kenneth, in 1927.

They all grew up in Asheville, North Carolina, and, as we learn from the exemplary 1977 Abrams monograph on Kenneth Noland by Kenworth Moffett, Asheville was “relatively sophisticated for a small southern town (its population was about 75,000 then).”

“Still,” Moffett continues, the Noland family “was unusual in being so involved with art.” The mother played the piano, and the father was a Sunday painter with some formal training. To Moffett, Kenneth Noland recalled that “paint and canvas were always around the house, and his parents encouraged the artistic interests of their four sons.”

Not surprisingly, Neil followed his two older brothers to study art at nearby, rigorously abstract Black Mountain College. Having served in the U. S. Navy, he was on the GI Bill of Rights, and continued his studies in Paris and Madrid.

During the later 50s and early 60s, he lived and worked in New York. Then in 1965, he became an assistant to Anthony Caro at Bennington College, and, from 1967 to 1976, an assistant to his brother Kenneth in Vermont.

For the next 25 years, Neil Noland divided his time between Vermont and eastern Long Island, where he established a studio in Amagansett in 1977.

In addition to creating his own sculpture in clay, fiberglass and metal, he was the workshop director at Sculpture Sites, a sculpture park in Easthampton, had a couple of university gigs and won a Pollock-Krasner Foundation Grant in 2001.

His work has been included in many group exhibitions, from Bennington and Black Mountain through to the Henry Street Settlement in New York City, but his solo exhibitions were limited to East End galleries.

During the late 1990s, he moved to Florida, where he continued to work as an artist while living with his son. He died there of cancer in 2013 at the age of 86.

What of his art, as seen in this show? The free-standing steel sculptures, while larger and pleasant, weren’t that distinctive. I saw them as generic constructivism.

The glazed ceramic reliefs, that’s another story. Though much smaller than the steel sculptures, the best of them glimmered and glowed with a particular zest very much their own.

True, their canny color choices (to say nothing of their stripe motifs) left no doubt that here was a brother Noland. However, the way that the stripes were deployed and the colors, applied & activated on the surfaces of the reliefs had the freshness of a unique vision.

What was most special about them was the way that (as the artist himself said) they combined painterly and sculptural concerns.

Those rippling surfaces could suggest corrugated cardboard, especially in the most successful works, which were based on triangular or pointed forms, and ornamented with stripes.

But the glaze added a whole new dimension much subtler than paint could ever be. It made them somehow shimmer, float and flame.