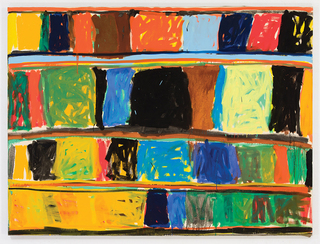 Stanley Whitney, In Our Songs, 1996. Oil on linen, 77 × 103 inches.
Not only has this city been luxuriating in warm but not desperately hot air this summer; even better, it has discovered a new culture hero. He is Stanley Whitney, whose abstract paintings are or have been on display in two exhibitions. “Stanley Whitney: Dance the Orange” is of 21st century work, and is at The Studio Museum in Harlem (through October 25).

“Stanley Whitney” displayed work from the 1990s, and was at Karma in the East Village (closed August 16). I’m truly sorry that I couldn't post this review earlier, but for reasons that I won’t bother my readers with, it wasn’t possible. I do review both shows below, and illustrate this posting with an image from the Karma exhibition.

For those among my readers who want to get an idea of the kind of work that Whitney is doing in the 21st century, they might take a look at my posting of May 23, 2012, when I reviewed Whitney's show at Team. Although as I say in this review, there are crucial differences between that show & this one, from a distance the paintings appear similar.

Anyway, one piece of evidence that Whitney has well and truly arrived is the enthusiastic NY Times review by Roberta Smith on July 17, filling two-thirds of the front page of the Weekend Arts II section.

Another piece is the even more enthusiastic article by Peter Schjeldahl in The New Yorker for August 3. Its discussion of Whitney’s current shows was combined with an interview with the artist and biographical background on him.

More praise came in a review by John Yau in hyperallergic.com, while Vogue ran another interview, by Julia Felsenthal.

For once, I agree with all these more fashionable tastemakers. I consider Whitney a major talent and found both his exhibitions highly pleasurable.

As indicated above, this wasn't the first time I’ve seen his art, but I liked it this time around even better than the last time I saw it. When I reviewed the show at Team, I remarked on how some of its paintings had arty little imperfections.

This struck me as an irksome mannerism, but it’s been largely dispensed with at The Studio Museum. This show – at any rate, in its main gallery – seems to me to be dominated by works that the artist strove to make as perfect as possible.

It can’t have much if indeed anything to do with my critique of the 2012 show, as many of these works predate it. Still less can I say whether the decision to select more perfect works was Whitney’s or that of the show’s organizer, Lauren Haynes. At any rate, I liked it.

It makes me tend to think of Whitney himself as more of a modernist than a postmodernist – though maybe he would prefer to keep that secret, since being classed as a modernist may be more of a handicap than a help in today’s climate.

ALSO THIS SUMMER AT THE STUDIO MUSEUM

Before I discuss Whitney’s show in more detail, I want to comment on the two other shows I saw during my visit to The Studio Museum. I concluded that I seem to get to that museum most often in summer. This would explain why its two main ancillary exhibits sounded so familiar (both on view through October 25).

Upstairs, at the back of the museum, is “Everything, Everyday: Artists in Residence 2014-15,” organized by Naima J. Keith. This annual exhibition showcases work by those emerging artists-in-residence who are the most recent participants in the long-standing program which gives The Studio Museum its name.

This year’s participants, all born in the 1980s, are Sadie Barnette (from Oakland CA), Lauren Halsey (from Los Angeles), and Eric Mack (from Columbia MD). All are well up on the “cutting edge” tools & materials found in the galleries of Chelsea and the Lower East Side.

The work at The Studio Museum seemed to me fully comparable to “cutting-edge” work seen in those other neighborhoods by other artists of the same age—though I’m so rarely into “cutting-edge” myself that I can’t say whether or not this show was notable for any major breakthroughs.

On the other hand, I do see a fair amount of photography, so I’m on firmer ground when I say that the second of these annual exhibitions is fresh and invigorating, this year no less than in previous years. It’s a photography show downstairs, in the basement, and called “One Stop Down: Expanding the Walls 2015.”

“One Stop Down” (the title refers to a technical choice in photography) displays the fruits of an eight-month residency for New York-area high school students who have been exploring the history and techniques of photography through experimentation, discussion, gallery visits and workshops led by contemporary artists.

The exhibition is more about photography as an end in itself -- and as a recorder of reality -- than it is about photography to be integrated into the art-gallery-type of “art”—all of which I welcome. The full name of the program, founded in 2001, is “Expanding the Walls: Making Connections between Photography, History and Community.”

Its primary catalyst is the archives of that fabulous recorder of Harlem as it wished to be seen in the 1920s and 1930s, James VanDerZee (1886-1983). These archives are housed at the Studio Museum, and, as always, the show includes selections from it.

They were chosen by the high-school participants on the basis of how nearly they mirrored these participants’ concerns, but they’re grand to look at for their own sakes, too. This year, there’s one truly hilarious VanDerZee, called “Untitled (Girl on Piano with Lyrics),” a gelatin silver print from 1930 which is perfect for people with evil minds.

Also most invigorating are many of the photographs by those younger participants, chronicling the world and the neighborhoods around them from their own individual perspectives. In all, twelve young photographers are represented. All are proficient, but if push came to shove, I’d have to say that three stood out: Nola Nelson (aged 16), Tiera Watson (aged17) and Xiaoxuan Wu (aged16).

In addition to contributing work, the twelve participants also helped to organize the show, as part a team headed up by Gerald L. Leavill II, Expanding the Walls/Youth Programs Coordinator.

THE MAIN ATTRACTION AT THE STUDIO MUSEUM

In the central & largest space of the museum is the show I’d come to see, “Stanley Whitney: Dance the Orange.” It consists of 28 paintings and works on paper created between 2008 and 2015, and is mounted in two spaces, the large entry gallery & the smaller one to the left of it.

The better part of the show is in the entry gallery. Here are displayed nine of the most perfect paintings in the show, all square and ranging in size from 20 x 20 inches to 8 x 8 feet.

All are similar, consisting of 2½ to 4½ rows of many differently-colored vertical rectangles, with the rows set off from each other by narrow horizontal bands of yet more contrasting shades. They are regular and geometrical, but not the more aggressive sort of starker hard-edged abstraction that one sees, for example, in Thomas Nozkowski or Ellsworth Kelly.

Whitney’s way of applying paint instead leaves a softness and gentleness in his surfaces that gives them (and the observer) room to breathe. All are oil on linen, and their colors, if not always that unusual, go with each other very nicely and are warm and luscious themselves.

Why I should get a sense of huge railroad tracks and/or piles of suitcases marching across the paintings from Whitney’s imagery? I can’t say, but it’s so. Perhaps it’s because these colors and composition are the opposite of static--because they have so much vitality & life.

The highlight of this main gallery is the long wall on the right-hand side of that large entry gallery (if you’re standing at the entrance). Here are arrayed the three largest and most spectacular paintings, all 8 feet square. They are “Hearts and Brains” (2012), “Elephant Memory” (2014), and “My Name is Peaches” (2015).

“Elephant Memory” has this very sporting way that a maroon rectangle near the center up top progresses to another maroon rectangle in the second row over to the left, and then to a third maroon rectangle down in the third row, off to the right.
This maroon is complemented by a lime rectangle up top and a band of lime between the top and second rows up – great combination.

Rounding off that wall is the smallest painting in this gallery, “The Blue” (2012), which – as its name suggests – is dominated by cool colors. Its brushwork is free, but I saw nothing of the deliberately accidental about it.

The second gallery in this exhibition, in addition to displaying the painting that gives the show its name, has a group of smaller works, often on paper and sometimes black and white or gouache, but all with similar imagery.

My feeling was that neophyte art-lovers in search of smaller Whitneys to add to their collections could have done better in the other Whitney show, downtown.

This other Whitney show was at Karma, on Great Jones Street in the East Village. It was of earlier work---specifically, drawings and paintings made in the 1990s—and was complemented by a publication reaching even further back.

Whitney, after all, didn’t spring just yesterday full-grown from the head of Zeus (like the goddess Athena). Like so many other – and really, most --- outstanding artists, it took decades for him to get even to the stage where he was in the 1990s.

A native of Philadelphia, he was born in 1946, and took a BFA at the Kansas City Art Institute in 1968 before receiving an MFA from Yale in 1972.

Since then he has participated in myriads of group exhibitions, and had solo shows in Italy, Austria, Germany, Belgium and Canada as well as the U.S. At present he divides his time between New York City and Parma, Italy.

The fat little book on sale at Karma featured (and doubtless does still feature) images (but not much text) documenting Whitney’s work from 1979 to 2015 (the luxurious catalog at The Studio Museum has essays by many distinguished contributors, but reproductions only of recent work).

The principal gallery space at Karma had five big paintings from the '90s—all rectangular and about the same size, 6½ feet high and 8½ feet wide. All were oils, but two were on canvas and three on linen.

They made an impressive show, particularly “In Our Songs” (1996), which commanded the space from its position facing the entrance.

The idiom of all was roughly the same as the paintings on view at The Studio Museum: rows of many differently-color rectangles separated by contrasting bands of color.

But where the paintings uptown are clearly outlined and firm, these downtown ones were still all shaggy, loose & irregular —often delightfully so, when and if you could bear in mind that they were only a stage in a longer development.

I liked them a lot – especially “In Our Songs” (1996). It's vigorous and squiggly, with lots of life, not least from that black rectangle in the center coyly abutting down on the clear blues to its left and below.

The other and most unforgettable display at Karma – and the reason for all those young collectors to have made a beeline for it – was a large wall in the entry space of the gallery, covered with 83 small to smaller studies and sketches and miniature drawings—most artistically arranged.

Maybe Karma will still have a few in a back closet when you drop by – or can point you in the direction of where to find them.