NOW WE HAVE PICASSO....SCULPTURE AT MOMA 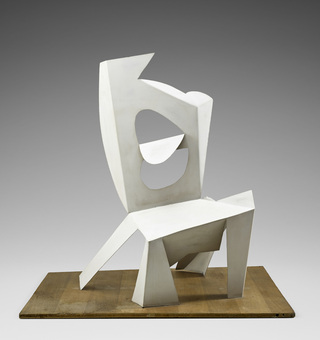 Thus did Edward Alden Jewell, senior critic of the New York Times, in 1939 introduce his review of “Picasso: Forty Years of His Art,” first of three retrospectives that the Museum of Modern Art has accorded the multi-talented master of Barcelona, Paris and Vallauris.

Jewell was saluting Picasso & his equally baffling modernist writer friend – but the question remains relevant with MoMA’s current epic exhibition, “Picasso Sculpture” (through February 7). The simplest answer to Jewell’s question is, “Go and see his show--if you haven’t already, and if you have, go back again, because it’s terrific.”

Here Picasso reveals his enormous wit, humor, visual intelligence, imagination, passion, creativity and technical mastery—in a medium that came second throughout his career. Sculpture was a private, personal thing with him; painting was the foundation for his reputation.

He didn’t sell much sculpture, so much work in this show comes from museums to which he or his heirs gave it (the heirs having mostly given work in lieu of death duties). Fifty-one out of the 141 items on the checklist come from the Musée national Picasso-Paris alone.

True, I dawdled about reviewing this show, but for three reasons. First: I knew everybody would hear about it anyway and want to see it without me prompting them.

Second: I liked many lesser-known shows this fall, especially at galleries. They closed sooner, and I wanted to tell my readers about them before they closed.

I also spent a lot of time going through the huge Picasso show that William Rubin staged in 1980. He turned the whole of MoMA over to it, and, although it included painting, drawing, and graphics, it also had a lot of sculpture.

Finally, I got memorable lectures on Picasso’s sculpture in grad school, too, with museum-quality reproductions – all courtesy of Kirk Varnedoe.

Thus I found “Picasso Sculpture” both familiar and unfamiliar – not that I didn’t welcome the familiar, but it’s so much more fun to make a discovery now & again.

“Picasso Sculpture” takes up ten galleries (with an eleventh for photographs of his work by Brassaï).

The first gallery is “Early Works and the First Cubist Sculpture, 1902 – 1909.” Here is the famous (though for me, not entirely successful) Head of a Woman (1909). My discoveries were two earlier, smaller, similarly modeled & far more tender sculptures, Seated Woman (1902) and Head of a Picador with a Broken Nose (1903).

The second gallery is “The Cubist Years, 1912-1915,” with sex nearly-identical versions of the Glass of Absinthe (1914). One would have been enough for me, delectable as it is. The Still Life (1914) with the upholstery fringe is entertaining, too, if also familiar. Ditto MoMA’s two versions of the masterpiece Guitar (1913, with string & paper, 1914 with sheet metal & wire).

I found the freshest piece here Violin and Bottle on a Table (1915). Even the paint looks fresh (could it have been touched up??).

Galleries 3 and 4 are both devoted to “The Monument to Apollinaire, 1927-1931.” I have often seen MoMA’s two larger versions of this wiry figure; neither is here, though there are smaller versions of it and/or related sculptures.

During this period, Picasso was experimenting with the iron worker Julio González: the two together were developing welded steel sculptures.

Their experiments were tremendously important for the American sculptor, David Smith, who would read about them in Cahiers d’Art.

But at that stage, González was more at home in this medium than Picasso, and more passionate about it. It would have been nice to see some of his work there.

True, there are some lively Picassos here, but only one that struck me anew with its genius. This was the darling, daring little Head (1932), made of painted brass and iron. It’s a face sitting on a tripod with two eyes, one above the other. Wicked!

The next two galleries are titled “The Boisgeloup Sculpture Studio,” the first being 1930-1932, and the second, 1933-1937. During this period, short, wiry Mediterranean Picasso was enthralled by tall, voluptuous Scandinavian Marie-Thérèse Walter. The most memorable sculptures here are those huge, rather surrealistic plaster heads of her that synthesize characteristics of heads with characteristics of male and/or female bodies.

They awed me in 1967, but this time around, I went for some of the smaller pieces in these galleries, including four thin standing women, carved out of fir & done in 1930. Also striking are the phallic bronze Cock (1932) and the large, extravagantly distended and distorted bronze Woman with Vase (1933).

The next gallery offered “The War Years, 1939-1945.” These works were made while Picasso was living in Paris under virtual house arrest. True, we have the famous but ever-clever bronze Bull’s Head (1942), based on a bicycle seat and handlebars, but there are only nine other items here.

My notes about them, in the useful booklet that serves in place of labels throughout the show read, “I suppose he deserves Brownie points for continuing to produce but overall offerings thin.”

The next gallery is “Vallauris Ceramics and Assemblages, 1945-1953,” Although it has more items (32) than any other gallery in the show, it was for me the biggest disappointment. At the entrance, my eye was assaulted by cute little ceramics, especially of women and birds, and I’ve never been fond of them.

I see them as lower-price, conservatively-styled objects that know-nothings bought in the 1950s because they thought Picasso was famous but they didn’t want to buy his truly radical work. That shows you how much I know.

At the Poons opening at Loretta Howard, I ran into Jaqueth Hutchinson, the sculptor. She knows more about Picasso ceramics than I do, and, although she too had been disappointed by those on view at MoMA, it was because she thought they could have been chosen better. What was there, she said, didn’t show how good Picasso could be.

The ninth and penultimate gallery is “Vallauris and Cannes Assemblages, 1952-1958.” Here are entertaining but very familiar bronze pieces based upon assemblage, including the celebrated She-Goat (1950) and Baboon and Young (1951).

For me, the principal pleasure in this gallery was The Bathers (1956), that six-piece ensemble of big stick figures. I remembered it from 1980, but I took pleasure in seeing it all over again – and observing how individual each of those six figures are.

The best part of the show – surprising and delighting me with many things I hadn’t seen before – was the tenth and last gallery, which is located across from the entrance to the show. This is “Sheet Metal Sculptures, 1954-1964,”

Only two of these painted cut-outs are familiar. All the others aren't only lively, but delicious in their economy of shape. Some of them are absolutely delightful, such as the ingenious Little Horse (1961), perched smartly on casters, and the droll Woman with Hat (1961), whose curves make her boobies resemble her eyes.

For sheer purity of form, though, nothing beats Chair (1961). It needs the title because the way it swoops and swirls makes it look like a living thing. How graceful! How wise!