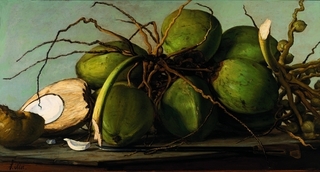 Francisco Oller (Puerto Rican, 1833-1917). Still Life with Coconuts (Naturaleza muerta con cocos), circa 1893. Oil on canvas, 27 3/4 x 44 1/4 in. (70.5 x 112.4 cm), framed. Private collection, New Jersey.
Some artists blossom early. Others, like fine wine, age into maturity. An illuminating show chronicling just such an evolution is “Impressionism and the Caribbean: Francisco Oller and His Transatlantic World” at the Brooklyn Museum (through January 3, 2016).

To be sure, this show is what might be called “context-heavy.”

As organized by Richard Aste of the Brooklyn Museum, and Edward J. Sullivan of NYU, it contains 85 works of art, plus the large reproduction of an 86th.

Yet only 42 of these works (including the reproduction) are by the show’s titular topic Francisco Oller (pronounced o-YAIR). The rest are included to illustrate his time & place, but may well distract viewers from his own accomplishments.

If you can manage not to lose sight of Oller’s progress through the first three parts of this show, you will be rewarded in the fourth and last to find that almost all of its works are by the master himself—and that they lead up to a socko finale.

PART ONE: THE CARIBBEAN -- BEGINNINGS

Francisco Manuel Oller y Centro was born in Puerto Rico in 1833 to a family which seems to have been at the very least comfortably fixed—and that also appears to have welcomed his desire to pursue a career in art.

Although he began studying at the local art academy early, this part of the show has none of his youthful work.

Mixed in with nearly 20 scenic views of the Caribbean (loosely defined) throughout the 19th century (three of them later works by Oller) are three portraits from the late 18th century by José Campeche (1751-1809).

Campeche was Oller’s principal predecessor artist in Puerto Rico—and a stylistic model for Oller himself as a boy.

Campeche’s portraits here suggest that Puerto Rico, although prosperous thanks to its thriving sugar plantations, was no more advanced culturally than frontier America had been up until nearly as late.

As Puerto Rico was still a Spanish colony, it was only natural that Oller should continue his artistic education in Spain, and the second part of this show concerns his relationship to the art of that country.

Although still conservative in its tastes, and predominantly agrarian in its economy, Spain had already produced Velázquez & Goya, among other gifted baroque, rococo and Romantic painters.

In Madrid, Oller studied for two years in the early 1850s at the Royal Academy of Fine Arts of San Fernando.

Its principal maître was Federico de Madrazo, who was also director of the Prado, already a world-class museum.

Oller must have haunted the Prado, which had opened to the public in 1819. He would have become familiar with its masterpieces—including those many from the royal collections.

Not least, this could have included some of the marvelous "bodegóns" (kitchen still lifes) that had been central to Spanish painting for hundreds of years.

Among 17th century masters of these moody, trenchant still lifes had been Francisco Zurburán & Juan Sánchez Cotán, but Oller was probably most familiar with those of Luis Meléndez, an 18th century artist who had executed many of them on commission from King Charles V.

Alas, only 3 paintings in this section of the Brooklyn show are by Oller, and only one is from his student days (a small study of a woman bullfighter).

The other two were done about 20 years later, when Oller had been appointed court painter by King Amadeo I. One is a battle scene and the other, a three-quarter length portrait of a colonel in full dress regalia.

Both are highly competent academic paintings—but no more.

In the later 1850s, Oller moved on to Paris to further his studies, and to develop into a practicing artist. This becomes the third part of the Brooklyn show.

Paris was more industrialized and socially diverse than Spain (let alone Puerto Rico). By the time Oller got there, its art scene was hopping, too.

In 1850, Courbet had shocked Paris Salon-goers with his gritty “realism;” in 1863, Manet would create an even greater stir with the radically simplified figures in “Olympia” and “Luncheon on the Grass.”

Finally, the first impressionist exhibition of 1874 would introduce to a mystified public that most popular, lasting – and initially most controversial -- of all the avant-garde movements of the century.

Oller does seem to have mixed and mingled with some of the greats of impressionism– not only Pissarro (like himself from the Caribbean) but Cézanne & Monet as well.

They appear to have liked him, respected his art, and written about him with some concern in their letters. He wasn’t just a social-climbing hanger-on (like Sargent).

The Brooklyn show includes a cute little Oller (ca. 1864) showing Cézanne painting outdoors under a parasol (to keep the sun off).

By the 1880s, at the latest, Oller’s paintings had acquired the “scandalous” hallmarks of impressionism: the immediacy of plein air creation, bright colors and free brushwork.

But nice as they are, the nine paintings by Oller (mostly landscapes) in this segment of the exhibition are all but lost among more than a dozen French paintings (all from the Brooklyn Museum’s fine permanent collection).

These pictures range from Barbizon painters like Corot & Millet on through works by Oller’s impressionist friends.

Next to Gustave Caillebotte, the least prepossessing of the French impressionists here, Oller holds his own—but he gets blown away when juxtaposed with Monet and Cézanne.

Until he was in his late 50s, Oller shuttled back and forth across the Atlantic, spending years upon end in Paris but also finding time on this side of the briny to marry, beget children and open the earliest of many art schools.

The last part of the Brooklyn Museum show is nominally concerned with this last period in his life-- but actually, less distinctive paintings done equally late already appear in the first and third parts of the show.

Thus what is really unique about this fourth part, and what makes it the most exciting part, is that it presents those canvases in which the artist is most purely himself.

Here are about two dozen works, mostly created in Oller’s later years, which synthesized his earlier influences and enabled him to create his own persona.

Aside from a few preliminary studies, the paintings here fall into four categories: landscapes, genre scenes, portraits and still lifes.

Though rendered with impressionist sunlight, the brushwork is tighter and more precise, somewhere between Courbet and academia. Equally importantly, the subject is distinctively Puerto Rican.

The prize possession of a museum in Puerto Rico, “The Wake”’ was judged too fragile to travel, but the full-scale color reproduction here is good enough so that I feel that I don’t have to see the original.

It depicts many lower-class Puerto Rican family members and friends crowded into a rural home and celebrating (yes, celebrating) the funeral of a baby.

In its profusion of celebrants, it reminds me of 17th century Dutch genre scenes by Jan Steen; in its macabre subject, I see a nod to Courbet’s “Funeral at Ornans” (1849).

Most of all I see the “licked” surface of academic painting. It didn’t surprise me to learn that Oller trucked "The Wake" clear across the Atlantic in hopes of getting it shown at the Salon of 1895.

True, the people in this painting aren’t obviously sentimental, like so many people in other Salon genre scenes, but they’re not far enough away from them to suit me.

On the other hand, I liked some of the portraits very much. Though their rich, dark brushwork is still traditional, it’s appropriate, and the individuality of the mostly-Puerto Rican subjects shines through.

Admittedly, the portrait of U.S. President William McKinley (done in 1898, the year that Spain ceded Puerto Rico to the U.S.) is godawful stiff.

However, that of José Gautier Benitez, the Puerto Rican poet (ca. 1885-1886), has a stinging vitality, and the one of Manuel Sicardó y Osuna (ca. 1866-1868), the public architect of San Juan, shows a relaxed and distinguished-looking figure.

BEST OF ALL: THE BODEGÓNS

The highlight of this show – at the very end of it -- is ten magnificent still lifes.

All but one of these remarkable paintings were made between 1890 and 1914.

Though mostly on the small side, they give the impression of being much larger—dominated as they are by monumental, luscious fruits: bananas, pineapples, plantains, coconuts, mameys, gourds, guavas, mangos, watermelons and sugar apples.

Most of these fruits grow happily in tropical Puerto Rico and less happily in temperate climes, but as artistic expressions, they can trace their long and honorable descent back to those great bodegóns that Oller must have seen in the Prado—and who knows where else?

Thus in his maturity, he threw away his impressionist copy-book and adapted to his New World surroundings a type of Old World painting that over the years must have come to mean more to him.

Not that these still lifes don’t have some residual Paris about them, but if there is one school of Paris that haunts them more than impressionism, it’s 20th century surrealism.

In Oller’s “Still Life with Coconuts” (ca. 1893) the foliage, stems or roots that accompany the fruit in its natural state twist and writhe over the fruit itself like some enormous dying spider.

It’s attractive but also disturbing. And, because of those disturbing overtones, as well as the precise rendering, this painting reminds me strangely of Salvador Dali -- another painter who would travel from Spain to Paris in the decade after Oller’s death.

How extraordinary is this-- that Oller in his old age should not only establish his own powerful identity but also anticipate another eerie reality -- above and beyond reality itself!

“Impressionism and the Caribbean: Francesco Oller and His Transatlantic World” has already been shown at the Blanton Museum of Art of the University of Texas in Austin. Following its appearance in Brooklyn, it will be on view at the Museo de Arte de Puerto Rico in San Juan from January 29 through April 24, 2016.