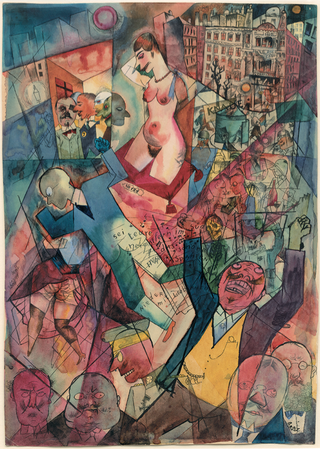 George Grosz (1893-1959), Panorama (Down with Liebknecht), 1919. Pen and ink and watercolor on paper. Private Collection. © Estate of George Grosz/Licensed by VAGA, New York.
Here's a rundown of some of the Big Attractions to be seen this autumn. This is definitely not everything on view, just shows that I – and, I like to think also my readers-- may want to see. A dozen-odd are in the Big Apple, another handful on the road.

1. The Museum of Modern Art may well attract the longest lines this autumn, with “Picasso Sculpture,” a survey of 150 sculptures by this protean master. The largest such exhibition since MoMA’s 1967 effort in this direction, it covers every aspect of his long career & include loans from museums and private collection both at home and abroad. Through February 7, 2016.

2. Another show at MoMA that looks promising is "Joaquin Torres-Garcia: The Arcadian Modern,"a major retrospective devoted to this rarely-seen Uruguayan modernist constructivist (1874-1949).

Including drawings, paintings, objects, sculptures and artist notebooks, this show is divided into two parts, the first devoted to the artist's early years in Spain, Paris and New York, and the second after his return to Uruguay in the 1930s.

Torres-Garcia was the father of Horacio Torres (1924-1976). Horacio attracted attention in New York in the 1970s for his figurative painting, but Joaquin, his father, was best-known for pictographic-like paintings that anticipated the 1940s work of Adolph Gottlieb. October 25 to February 15, 2015.

3. The Whitney Museum of American Art will have two shows that I want to see. The first is “Archibald Motley: Jazz Age Modernist.” Motley (1891-1981) was an African-American Chicago artist who painted lively scenes of daily – and nightly -- life in his home town. October 2 to January 17, 2016.

4. The second is “Frank Stella.” This is a career retrospective of the artist who is probably America’s best-known living abstractionist (b. 1936), with approximately 120 works, including paintings, reliefs, sculptures, maquettes and drawings. October 30 to February 7, 2016.

5. The Jewish Museum is presenting some striking images in “The Power of Pictures: Early Soviet Photography, Early Soviet Film.”

Covering the period between the 1917 Bolshevik Revolution through the 1930s, this show offers 181 works that document how avant-garde photography, film and poster art were harnessed to disseminate Communist ideology. Through February 7, 2016.

6. The Neue Galerie is going back to the gaudy days of Weimar with “Berlin Metropolis: 1918-1933,” a multi-media production with 300 examples of painting, drawing, sculpture, collage, photography, architecture, film, and fashion.

It’s curated by Dr. Olaf Peters, who scored such a smash success with his show on “degenerate art” in 2013. Among the artists featured will be George Grosz, Max Beckmann & Raoul Hausmann, the dadaist. October 1 through January 4, 2016.

7. The Frick Collection is offering “Andrea del Sarto: The Renaissance Workshop in Action,” billed as the first major monographic exhibition in the U.S. of this High Renaissance Florentine painter (1486-1530).

Co-organized by the Frick and the J. Paul Getty Museum in Los Angeles (where it is currently appearing), this exhibition features nearly 50 drawings and three related paintings. October 7 through January 10, 2016.

8. The Metropolitan Museum of Art, as usual, has a crowded schedule of shows that made me want to see them. There are a dozen-odd Asian shows from its permanent collections that it is or will be mounting this fall, in honor of the centennial of its Department of Asian Art. In addition, two major loan exhibitions and one boutique show stand out.

9. First of the two major loan exhibitions is “Kongo: Power and Majesty,” with 134 Central African works drawn from more than 50 institutional and private collections in the U.S. and abroad, and dramatizing the relationship between Africa and Europe from the 15th to the early 20th centuries. Through January 3, 2016.

10. The second big show is “Ancient Egypt Transformed: The Middle Kingdom,” offering 230 works and groups of works created between 2030 and 1650 B.C. from its own collections and those of 37 other museums and private collections in North America and Europe.

This is said to be the first comprehensive presentation of Middle Kingdom art and culture. October 12 to January 24, 2016.

11. The boutique presentation is “Andrea del Sarto’s Borgherini Holy Family,” which pairs one del Sarto painting owned by the Met with a related panel from the National Gallery of Art in Washington, DC, to complement the del Sarto show at the Frick. October 14 to January 10, 2016.

12. On the gallery front, I must mention two retrospectives at Berry Campbell in Chelsea that my readers may want to see. Dan Christensen is the guest of honor through October 17, to be succeeded by William Perehudoff from October 22 to November 28. ...Four more Christensens are on view at Leslie Feely, on the Upper East Side, through October 17.

13. And, at Andre Zarre, Randy Bloom & Dee Solin will be showing recent work, October 20 through November 14. Solin, of course, also showed recent work just last season, but New York hasn't seen any prolonged exhibition of Bloom's work since she shared the stage with Louise P. Sloane at Sideshow in Williamsburg, back in 2011.

14. Across the East River, the Brooklyn Museum will present “Impressionism and the Caribbean: Francisco Oller and His Transatlantic World.”

This exhibition centers on Francisco Manuel Oller (1833-1917), a Puerto Rican painter who studied in Paris as a young man, exhibited with the French impressionists and then returned to his native land to plant the seeds of impressionism there.

Its 84 paintings and drawings also include work by artists associated with him in both Europe and the Americas. October 2 to January 3, 2016.

15. Further afield is Boston. If there is a more class-conscious city in the U.S. than Beantown, I don’t what it can be, so it is fitting that the Museum of Fine Arts, Boston should be giving us “Class Distinctions: Dutch Painting in the Age of Rembrandt and Vermeer.”

This show is said to include 75 major works from at home and abroad by not only the biggies in its title but also Frans Hals, Jan Steen, Pieter de Hooch and you know, like that, so it should deservedly draw crowds, even (or because) it should also have exceedingly P.C. wall texts & labels. October 11 to January 18, 2016.

16. In the City of Brotherly Love, two museums will display three exhibitions of note. The Pennsylvania Academy of the Fine Arts offers “Procession: The Art of Norman Lewis.”

With approximately 90 paintings and works on paper dating from the early 1930s to the late 1970s, this show may fill in some of the gaps left in the Jewish Museum’s exhibition last year that paired Lewis with Lee Krasner. November 13 to April 3, 2016.

17. Meanwhile, the Philadelphia Museum of Art lists two shows that sound worthy. The first is “Wrath of the Gods: Masterpieces by Rubens, Michelangelo and Titian.”

This show attempts to demonstrate how Rubens could have taken inspiration from a drawing by Michelangelo and a painting by Titian in order to create his own masterpiece “Prometheus Bound.” Through December 6.

18. The second show is “Audubon to Warhol: The Art of American Still Life.” It sounds like it could start out well, and continue to look attractive throughout most (if not all) of its 120 oils, watercolors & works in other media. October 27 to January 10, 2016.

19. Finally, the National Gallery of Art in Washington will be the final port of call for “Power and Pathos: Bronze Sculpture of the Hellenistic World.”

This group of some 50 bronze sculptures and related works shows how Hellenistic art spread from Greece throughout the Mediterranean between the fourth to first centuries B.C., and has work from archaeological museums in ten different countries.

Could be stunning. Has already played the Palazzo Strozzi in Florence and is now at the J. Paul Getty Museum in LA. In DC, December 13 to March 20, 2016.