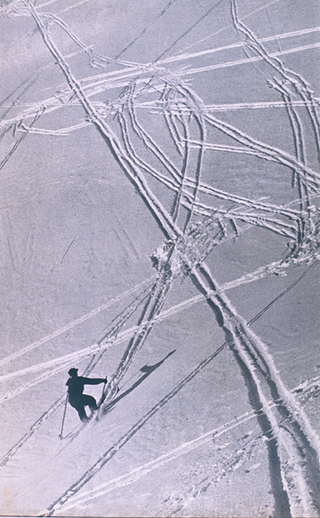 Georgy Petrusov, Skier, early 1930s. Gelatin silver print. Collection of Alex Lachmann. Artwork © Georgy Petrusov, courtesy of Alex Lachmann Collection.
If there’s anything harder than putting a positive spin on a seedbed for fascism, it’s putting a positive spin on what Ronald Reaganin 1983 called the “evil empire” -- the Communist Soviet Union. However, the Jewish Museum has brilliantly managed such a spin with its nakedly beautiful exhibition, “The Power of Pictures: Early Soviet Photography, Early Soviet Film” (through February 7).

To be sure, the period covered in this exhibition isn’t that of the Cold War, when from 1945 to 1989 the USSR was dominating Eastern Europe, and trying to undermine what we used to call “the free world.”

Rather, the period covered in “The Power of Pictures” is earlier: from the October Revolution of 1917 until 1939, the beginning of World War II.

With about 180 photographs, posters, movies and memorabilia, it shows the creative accomplishments of an earlier, more idealistic period, idealistic to Russia itself and to progressives outside of the USSR.

Everybody knew that the Soviet Communist regime was dictatorial, but in that far-off era, many still believed it was dictatorial for the sake of the masses, and even that eventually – as Friedrich Engels had prophesied – the state would wither away.

This attitude was especially true when Lenin, who had led the revolution, was still running the government, but he died in 1924. Following three years of power struggles, Josef Stalin emerged as sole & autocratic ruler, continuing in power until his death in 1953.

Although practically no work in the Jewish Museum show dates from before 1925, the opening gallery exhibits the kinds of pictures that were initially created by the gifted photographers at the center of developments.

The first works shown, by such leaders as Alexander Rodchenko & El Lissitzky, are esthetic and experimental, as opposed to propaganda.

We see quaint little “photograms” made with sensitized paper & showing household objects. We see landscapes and cityscapes in which the pattern formed by trees or steps is more important than the subject.

Helping to create these patterns are the daring angles at which the subjects are captured – seen from above, below, or at some dramatic side angle.

On display are two small, portable cameras that made such picture-taking possible: a 1930 German Leica and a 1934 Soviet imitation Leica.

Both constituted a drastic change from the studio-bound box camera that had to be stood on a tripod. The new cameras gave photographers infinitely more freedom.

Concurrently, the commissars concluded that all this talent could & should be utilized to benefit the larger society – not only urban factory workers but also rural peasants, a far larger segment of the population.

Seventy percent of the USSR’s population was illiterate – so the best way of reaching them was through images: photographs, picture magazines, posters and movies.

And that it is what the rest of the show so richly documents: how a whole generation of gifted avant-garde photographers were put to the service of glorifying the revolution with powerful visual propaganda.

Through a number of the labels, the suggestion is made that these later photographs were exercises in deceiving everybody (at home & abroad) into thinking that the Soviet Union was making life better for the average citizen.

Yet the photographs are so beautiful that I for one can’t help believing that to some extent, at least, they portray not deceit but truth.

(Full disclosure: I was reared by a warm-hearted lady who to the end of her life in early 1989 felt they were doing things right in the Soviet Union. During the 1950s witch hunts, she sheltered two Hollywood actors on the lam from the House Committee on Un-American Activities, which was investigating Communism in the movie business, and I got to know them a bit.

(Sure, they were fanatics, and I didn’t want them running my government, but they also really cared about the low status of women and African Americans. – to say nothing of income inequality – years, even decades before such causes were taken up by Middle America.)

The most classically cubist photographs at the Jewish Museum are the heroic ones of industrial topics: a mighty hydroelectric dam, towering skyscrapers, a rushing locomotive, and more.

Portraits of literary luminaries include some who ran afoul of the regime, among them Nobel Prizewinner Boris Pasternak & poet Anna Akhmatova.

Imposing photographs of the military, from the Red Army to a huge cannon’s mouth, reminded me that Clement Greenberg once said that the turning point in World War II was the Battle of Stalingrad. (Having googled this subject, I believe he was right.)

Following the segments on individuals and the military, “The Power of Pictures” moves on to “Staging Happiness,” documenting (among other things) ordinary people sunbathing in the Crimea and a tearoom tabletop still life.

In the section on “Physical Culture,” parades of athletes summon up memories of those Olympics where Soviets won many gold medals, but we occasionally escape from team sports and can rejoice in an individual skier making graceful patterns in the snow.

Based upon a 19th century short story by Nikolai Gogol, it concerns a government clerk who yearns for, then loses a beautiful overcoat. If the movie has Soviet propaganda in it, I missed it – beyond the fact that this is an exquisitely made, haunting little film.

“The Power of Pictures” was co-organized by Susan Tumarkin Goodman & Jens Hoffmann, both of The Jewish Museum. It will travel to The Frist Center for the Visual Arts, in Nashville, Tennessee (March 11 to July 4, 2016), and the Joods Historisch Museum, Amsterdam, The Netherlands (July 24 to November 27).