TOO PERFECT? ANDREA DEL SARTO AT THE FRICK & THE MET 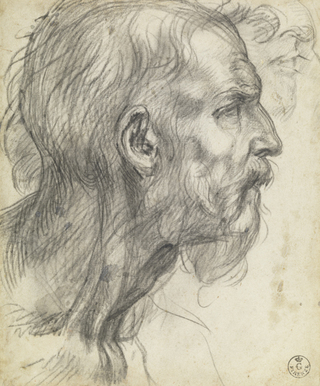 Andrea del Sarto (1486–1530) Study of a Bearded Man in Profile, ca. 1526–27. Black chalk, possibly with gray wash, 8 9/16 x 7 1/8 inches. Galleria degli Uffizi, Gabinetto Disegni e Stampe, Florence. By permission of the Ministero dei beni e delle attività culturali e del turismo.
Around 1510, it was tough for a painter to make it to the top of the Central Italian art heap. Consider the competition: Raphael, Leonardo & Michelangelo. In this time, Andrea del Sarto (1486-1530) was sometimes ranked as Number 4. How he might have achieved that rank (if not precisely what he achieved) forms the substance of two related and absorbing current Manhattan museum exhibitions.

The larger and more absorbing of these two shows is “Andrea del Sarto: The Renaissance Workshop in Action” at The Frick Collection (through January 10, 2016). Co-organized with the J. Paul Getty Museum in Los Angeles, it was on view there last summer.

The New York installation has been coordinated by the Frick’s Aimee Ng, and consists of three oil paintings and four related drawings exhibited in the Oval Room on the main floor, with an additional 41 drawings in the lower-level galleries used for special exhibitions.

The smaller of these two exhibitions is “Andrea del Sarto’s Borgherini Family” at The Metropolitan Museum of Art (also through January 10, 2016). As organized by the Met’s Andrea Bayer & Michael Gallagher, it offers two paintings, no drawings and one photograph of a related drawing.

The first painting, “Holy Family with the Young Saint John the Baptist” (ca. 1528), is owned by the Met. The second, “Charity” (before 1530), is on loan from the National Gallery in Washington, and very similar to the Met’s painting.

In fact, the main argument of this exhibition – hammered home by wall texts & photography employing the latest infrared techniques to examine pentimenti and other underpainting or drawing – is that both paintings may have been generated from the same “cartoon” (preliminary drawing), and/or utilized the same preliminary sketches.

The Frick has a bit of this fancy photography, too -- I think, though I tend to nervously bypass such exhibits, preferring to look at real art. I did get the general impression, though, that both New York shows were insisting that Andrea wasn’t just a single painter, he was a whole workshop, with fleets of studio assistants (in Italian, garzoni) rushing to do his bidding and churning out paintings with interchangeable parts on an assembly-line basis.

At the same time, the shows wanted to suggest – especially the Frick – that he was also a solitary genius, with every work on view (including not only the drawings but also the paintings) solely the creation of his own hand.

You can’t have it both ways, but maybe the paintings in these shows, at least the smaller ones at the Frick, were more likely all or mostly by Andrea?

The many larger, more important commissions that Giorgio Vasari, in his “Lives of the Most Excellent Painters, Sculptors and Architects” attributes to Andrea were more likely done with the aid of garzoni-- but is it news that painters have for most of recorded time had assistants?

Since the Renaissance, we know that Titian, Bernini, Rembrandt, Rubens & more recently, Frank Stella were (and are) given sole credit for work that may have been all or mostly done by students, studio assistants, and/or members of their workshops.

Before the Renaissance, in the medieval guild system, artists started out as apprentices to a master--that must have been pretty much the same thing. So why make such a big deal out of a workshop for Andrea?

How good was he, really? Do we share the high opinion of him that so many of his contemporaries seem to have had, or do we offer the more qualified praise for his art dealt out by Vasari?

This first art historian admired Andrea’s “profound genius and judgment,” and the way that his figures were “well-conceived, free from errors, and absolutely perfect in every respect,” but still found the artist a little lacking in “fire and boldness of spirit.”

I can see what he meant, in the sense that the paintings in this show, while tremendously beautiful, are also just the least bit bland, the least bit impersonal, the least bit lacking in what might be called “character” or “personality.”

It’s like in the struggle to render his paintings “absolutely perfect,” Andrea ironed out all their kinship to actual (and inevitably flawed) humanity.

The drawings are a lot livelier, a lot less perfect, and as a result much saltier and/or spicier -- much more charged with that elusive something we might call vitality.

Anyway--balanced, incisive and far more emphatic than the paintings, these drawings are almost all a joy to contemplate -- whether depicting drapery, a donkey, human anatomy, physiognomies, compositional arrangements or what have you.

Many times over the years, the Frick has given us exhibitions that promised a whole artist but gave us only a smattering of paintings or sculpture plus oceans of graphic work. When the artist in question excelled in paintings or sculpture, I have sometimes felt shortchanged by such treatment, but in this case, emphasizing the drawings shows Andrea del Sarto in the full flush of triumph.