"JERUSALEM" AT THE MET: MOST SUMPTUOUS SHOW IN TOWN 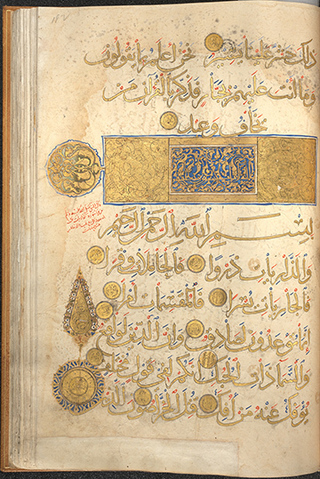 Why the relief at being able to describe a show as “relevant”? Well, as far as the world as a whole is concerned, the Met is already one of its great museums. Recently, Trip Advisor, which bills itself as “the world’s largest travel site,” named the Met “the world’s top museum” in its Travelers’ Choice Awards for the second straight year.

Nevertheless, the tiny minds who direct taste in the Big Apple’s art world, warped as they are by Duchamp’s equation of all museums with mausoleums, are always harping on the need for the Met to be more “relevant.”

This seems to be a newish code word for “cutting-edge” or “with-it” and really means that these people think the Met should join every other museum in town in the feverish race to display the newest wrinkles. This is ridiculous.

Even Roberta Smith, who by me is far from being a stick-in-the-mud, suggested on September 18 in the New York Times that the museum “might dial back its frantic involvement with the new and the now….It is one of the world’s great encyclopedic museums; its primary focus is the past. Let other museums tend to the messiness of the immediate present.”

Still, “Jerusalem” qualifies as “relevant” because it celebrates an ancient city that has been in the news, so to speak, over the centuries, and most particularly since the end of World War II and the founding of Israel.

And during the Middle Ages, its politics offers comparisons with the present – not only in terms of its diverse population but in the sense that the situation was more than ordinarily chaotic.

During these years, primary control of “the Holy Land” passed back and forth between Roman Catholic Crusaders (who established two short-lived kingdoms) and assorted Muslim powers (headquartered variously in Egypt, Anatolia and elsewhere).

In addition, Greek Orthodox prelates were struggling to maintain their foothold and many other Christian sects and religious orders – to say nothing of the occasional Jew – were doing their best to establish a presence.

Added to which, the Holy Land as a whole, and Jerusalem in particular, were pilgrimage destinations for the far-flung members of all these three Abrahamic religions, coming as they did from the western fringes of Europe to the eastern fringes of India.

And yet, when you go down the checklist of the approximately 200 items in the show’s checklist, you will find that—although approximately a third were loaned by museums, libraries and other owners in Jerusalem, only one in ten was actually made in Jerusalem.

This tells me that the city was more important as a symbol and source of inspiration than as a manufacturer or even vendor of goods.

Of course, the way that the show is put together only partially substantiates this conclusion of mine. It was organized by two of the Met’s medievalist curators, Barbara Drake Boehm & Melanie Holcomb, with the installation supervised by Michael Langley.

Practically never do I mention installations, but the all-black walls in this case, upon which are projected a patchwork of color photographic views of present-day pale brown and white Jerusalem under sunny blue skies, lends a very mysterious but persuasive tone to the proceedings, while also making the actual artworks on view in their many vitrines glow like so many precious jewels.

The first gallery in the show is devoted to Jerusalem as a center of trade and commerce, with an emphasis on it as a destination for tourists who wanted to buy souvenirs.

This is a true postmodernist notion, which I have encountered before – in relation to the Hudson River School. Here scholars who have come along since I myself discovered Thomas Cole & Asher B. Durand like to emphasize that all the woodsy views that they and their contemporaries painted were merely vistas that tourists had already seen as opposed to nature unexplored and free.

The notion that Cole and Durand were artists bringing the wilderness into people’s living rooms was to be replaced by Cole and Durand as postcard illustrators, and in like measure here in this opening gallery of “Jerusalem” we have piles of golden coins and displays of precious jewelry, with religious imagery in second place.

This to me is part of the underlying cynicism that Duchamp brought to art appreciation. The notion that in the Middle Ages people in all sincerity wanted to visit Jerusalem purely for the good of their souls is one that postmodernists find more difficult to accept than modernists ever did.

Still, any equally innocent art-lovers who may wander into this exhibition are sure to be dazzled by the gold and precious stones. It’s sure box office stuff.

The rest of the show (with the exception of the gallery devoted to patrons of the arts) is more in line with the non-monetary spirit in which members of those three great faiths more likely congregated in Jerusalem all those centuries ago.

The next gallery after “trade & commerce” is devoted to “the diversity of peoples,” and is distinguished by the first display of the many illuminated manuscripts – especially but not exclusively Bibles –that provide such a wealth of beauty throughout this show.

The exhibition’s literature makes the point that all three religious groups were “people of the book,” but Christianity is represented in fullest force.

At least 80 of the works in the checklist are Christian religious documents or objects (including manuscripts, reliquaries, devotional objects, sculptural elements from churches and so on).

By contrast only about two or three dozen can be identified with Muslim religious precepts and practices, and only a dozen or so represent religious beliefs and practices unique to Judaism.

I don’t think this distribution reflects any religious preferences on the part of the exhibition’s organizers; it was simply a question of what was available, and is counteracted to a degree by the more equal gallery space allotted to each religion. Still, there it is.

If you like European medieval art (and who doesn’t?), here is a bath of it – and very wonderful it looks, too.

EACH OF THREE RELIGIONS,
PLUS MILITARY MIGHT & ROADSIDE GENEROSITY

Following “the diversity of peoples” is one of the most moving parts of the show: a smaller gallery devoted to “the absent temple.” It is sparse on its display of objects, but powerfully dominated by large color photographs projected on the dark walls and showing the majestic ruins of what is known to Jews as the Second Temple, built in 516 BCE and destroyed by Roman legions during the reign of the emperor Titus in 70 CE.

In addition to modest displays in vitrines of religious manuscripts (all Jewish or at least dealing with the theme of the temple), another vitrine display features three enchanting tiny golden Jewish wedding rings. Created in the Rhine River Valley in the 14th century, each represents a tiny temple – to be worn for the wedding ceremony but laid away for every day.

Next come two parallel galleries devoted, respectively, to “Roads to Jerusalem” and “The Drumbeat of Holy War.” Dominating the latter are two huge and extraordinary swords, made of steel and wood (and in one case also iron). One was created ca. 1366 - ca. 1436 in Cyprus or Anatolia, and the other created before 1419, somewhere in Europe.

Knowing how much shorter people were in the Middle Ages than they are today, one is amazed to consider the possibility that anybody could hoist those swords. Maybe they were carried by knights on horseback?

There is also the tomb of a French Crusader, with an effigy of himself lying atop it – fully armed, and with another sword – which, to judge from its Arabic inscription, failed to protect its owner.

The inscription indicates that the sword was donated to the armory in Muslim Alexandria, apparently after having been captured in battle. The tomb effigy, however, eventually came to rest at the Met’s uptown medieval annex, The Cloisters—from whence it is on loan.

Even more delightful is a small “Scene of Carnage,” really only a sketch, watercolor on paper, from the 11th to 13th centuries, probably originating in Egypt, with lithe, free forms..

“Roads to Jerusalem” has a pot for cooking lentils and a brass brazier, associated by their labels with foods prepared and distributed by Muslim keepers of the Cave of the Patriarchs in Hebron to pilgrims en route to Jerusalem and taking in other sacred sites on the way.

However, this section also boasts what is perhaps the single most lovely Christian display in the entire show. This is five historiated twisty-turny Romanesque capitals, carved in limestone and coming from the Church of the Annunciation in Nazareth.

Created in the early 1170s, they were originally intended for the church but prudently buried when it became known that the mighty Muslim ruler & general Saladin was advancing on the Holy Land, determined to oust the resident Crusaders.

The capitals weren’t rediscovered until the early 20th century, but they are extremely enjoyable, illustrating with curlicues the heroic actions of Jesus’s disciples, including some events that don’t appear in the Bible..

Next come two galleries devoted to the most sacred sites in Jerusalem, respectively for Christians and Muslims.

The Church of the Holy Sepulchre was the culmination of any Christian’s pilgrimage, since it was (and I suppose, still is) believed that Christ was crucified here, buried here, and rose from the dead here.

For Moslems, the equivalent was (and is) the Dome of the Rock and the Aqsa Mosque, the Rock in particular being considered the place where the Prophet Mohammed ascended to Paradise.

The gallery devoted to these Muslim monuments is dominated by a huge vitrine in which are located a handful of big glass lamps, ornamented with gold and enamel that looks like precious stones.

Created between 1382 and 1399, in Egypt or Syria, they are typical of the oil lamps that hung by the hundreds in the Dome of the Rock, the Aqsa Mosque, and elsewhere, in less eminent mosques and schools. Often they included words from the Qur’an: “God is the light of the heavens and the earth.”

They look like enormous goblets and are so appealing that Holland Cotter, who reviewed this show for the New York Times, chose them as his review’s initial illustration.

This doesn’t surprise me, knowing that in today’s progressive art world, one gets Brownie points for being nice to Muslims, and no Brownie points for being nice to Jews (or Christians). But for my money, the most spectacular part of this particular area is the large “Section of a Qur’an” created sometime in the 13th century in Syria, the Jazira or Egypt and consisting almost entirely of rich gold lettering on very white paper.

With the chic simplicity of the pure gold on white, and the elegance of the Arabic lettering, it manages to make all those richly colored Christian (and Jewish) manuscripts look almost vulgar by comparison.

The last section of the show, “The Promise of Eternity,” is about Jerusalem as the springboard or launch pad to Heaven and it’s the weakest part of the show, reading in fact almost as though it had been an afterthought.

But even here are some delicious moments, including a handsome sequence of oversize miniature paintings depicting Mohamed’s ascent to heaven, a number of large & opulent "chasses" (reliquaries shaped like churches, with images of Christ in Majesty on them) and Bibles and other religious manuscripts depicting the Apocalypse and even the prophesied erection of the Third Temple.

There’s so much else, though, in the show as a whole – and I haven’t begun to describe its contents -- that visitors will feel sated, even glutted, as they walk out the exit. They may even feel a little bit like they’d been to Jerusalem themselves.

Thank you for pointing me toward this. I'll be sure to see the actual exhibit.