VENERABLE FROM AFRICA: “THE MIDDLE KINGDOM” AT THE MET 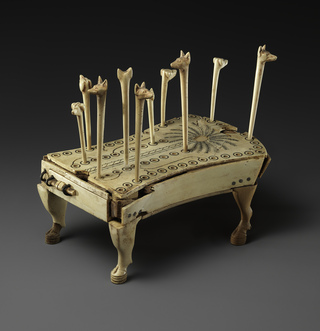 This mammoth exhibition, as organized by a team of the Met’s curators, headed by Adela Oppenheim & Dorothea Arnold, fills eleven galleries in the Special Exhibitions area of the museum.

Its wealth of artworks includes approximately 250 statues, steles, reliefs, plaques, papyri, jewelry, sarcophagi, mummies, masks, pottery, groups of little tomb figures in action settings, tools, weapons, toys, games and all the other wondrous objects so often carved from dozens of different kinds of stone and - even when made of wood - so miraculously preserved in north Africa’s arid climate.

These are what we’ve come to expect from ancient Egypt—for, despite more recent comings and goings of peoples, that civilization is still more deeply embedded in modern European-American experience than Central Africa ever was.

This is so because anybody who has ever taken an art history survey has been introduced to it, but even more because ancient Egypt’s presence on the Mediterranean meant that it traded with and shared the cultures of later Mediterranean civilizations – cultures that linked up over centuries to arrive at our current one.

Egyptian statues of standing kings provided prototypes for archaic Greek kouroi -- which would pave the way for the Apollo Belvedere, Michelangelo’s David and so on, right up (at several removes) to the Statue of Liberty.

Egyptian hieroglyphs furnished the basis for the alphabet developed by the Phoenicians and then passed along to the Greeks.

Even our notion of one God, transmitted from Judaism into Christianity, may conceivably have originated in the radical reign of monotheistic Pharaoh Akenaten – though many contemporary scholars dispute it.

Each of the three “kingdoms”, as I understand it, refer to periods when Egypt was united under a succession of single rulers, and separated from one another by periods of turmoil when different rulers were struggling for ascendance.

Given the prevalence of these power struggles, it’s remarkable that artistic forms continued to be so consistent through this entire millennium -- and right on down to the first century BCE, when the country was being taken over by the Romans.

Consistent, yes, and unfortunately the constant repetition throughout the centuries of the same styles and similar subject matters led to a gradual decline in freshness and vigor (much the same thing happened in China).

After I’d carefully waded through the eleven galleries of “Ancient Egypt Transformed,” taking copious notes, I sneaked a peek at the Old Kingdom work in the Met’s permanent collection, just to see if it was really as good as I’d remembered, and yes, it was – the best of it simpler, more rugged and just more beautiful than anything in the Middle Kingdom.

That said, there is still a huge amount to enjoy in “Ancient Egypt Transformed,” not least a convocation of brilliantly-crafted objects to compare and contrast with each other, as they may never be together in the same galleries again.

What seemed new to me was the many works from tombs built not only for pharaohs but also for queens, princesses, ladies of quality, and many men who’d belonged to middle management.

True, Egyptian peasants, who did all the serious work in that society and constituted 80 percent of the population, were present only as images in reliefs, steles, carvings and sculptures intended to provide food, drink and other necessities in the afterlife for elevated personages.

But I don’t recall seeing before so many images of and facilities designed for the interment of stewards, provincial officials, and “overseers” of priests, soldiers, sculptors, artisans or farmers.

Maybe this profusion is because this period is more recent than that of the Old Kingdom, therefore its artifacts have survived in greater numbers; maybe the greater population and/or material wealth of the Middle Kingdom was in fact responsible for this broadening of surviving material. Probably, it’s a bit of both.

Anyway, there is much to see. Among the many works that seduced my eye (in the order that they did so) were the sweet relief of an offering bearer with pintail ducks (catalog #14); the tiny statuette of a princess nursing her son (#51); and the black statue of a steward with his tiny wife, once owned by Napoleon and Josephine (#68).

Also delightful are the marvelous model of a granary with scribes keeping tally in an outer hall, while the peasants in the inner hall prepared grain for counting (#93); the miniature game of hounds and jackals, with a tiny board on legs pockmarked with holes, and spikes with animal heads to stick in these holes (#188).

Plus three lovely little faience hippopotami, and a tiny wood crocodile (#155-#158); to say nothing of a piquant stand in the shape of a dwarf(#139).

At a certain point, my eyes began to glaze over with all this glory, but I snapped to attention with the grand finale, a small space with a colossal pharaoh’s head high on a pedestal in front of a wall-size photo of a ruined temple (#222).