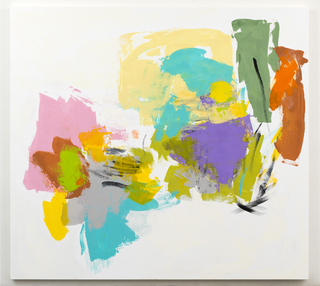 Carolanna Parlato, Beckon, 2015. Acrylic and molding paste on canvas, 66 x 72 inches. Courtesy Elizabeth Harris Gallery.
Two appealing mid-career artists are showing at Elizabeth Harris in Chelsea. The front gallery displays eight abstract paintings on canvas (all done in 2015) in “Carolanna Parlato: A Delicate Balance,” while in the back gallery may be found fifteen representational drawings on paper (all done in 2014) in “Sandy Walker: Stehekin Poems” (both through February 14).

I went to this gallery thinking that I’d been hearing good things about Parlato for a long time, and that it must be high time for me to do a review of her work. I liked what I saw of her work on this occasion, too.

But after returning home & consulting my website, I realized that I’d already posted a long review of her last show on September 11, 2012, so I decided to do a briefer update on her work and incorporate Walker’s work as well.

Carolanna Parlato is a native Brooklynite, most likely born in the 1960s. She took her MFA from the San Francisco Art Institute, and has exhibited widely in New York and elsewhere since the mid-1990s (this is her fourth show with Harris).

Earlier work I’d seen (in the flesh or in reproduction) was conspicuously (if attractively) dripped and/or poured. This show suggests that she has outgrown the need to demonstrate admiration for earlier poured painters from Pollock to Larry Poons, and become more willing to fly on her own (possibly because of the proliferation of latterday dripsters like Jackie Saccoccio & others).

Anyway, this time around we have paintings in which Parlato employs acrylic and molding paste to create many small to medium-sized, irregular but rounded, solid and tidier shapes on canvas. No drips that I noticed.

These paintings have lovely, mellow fruit-and-flower color schemes—especially, for example, in “Clouded Memory,” which boasts a combination of three greens (lime, mint and Kelly), together with lemon, beige and tan.

In addition to outgrowing the need to drip, Parlato (it would seem) is trying to cut down the amount of space devoted to paint areas on a canvas, and to float these areas in larger seas of white.

That at any rate would explain the fact that “A Delicate Balance” is the canvas which gives its title to the title of the show – and is a large grid painting with rows of vaguely square shapes floating in emphatic white space.

It’s a nice painting, if you like grids, but I am so jaded that I feel I have seen grids. The other big painting that utilizes a lot of white is “Beckon,” and I liked it a lot better – especially the way its shapes rather cheerfully tilt up to the right, like a sailboat running before a breeze.

Also impishly attractive are two smaller canvases resolutely fully-colored (with a minimum of white, and some very likeable pinks, beiges & grays): “Blame it on the Rain” and “Skycatcher.”

Sandy Walker (b. 1942) is a native of Washington DC who studied art history at Harvard before making the rounds of several art schools.

Now based in Oakland, California, he is a nature lover who has drawn and/or painted many wilderness sites. This show (his second at Harris) continues with the same concern.

Its title, “Stehekin Poems” refers to a wilderness valley in Washington State where the family of the artist’s wife bought a cabin many years ago.

All of the drawings on view were made with oil stick crayon and most, in a semi-abstract fashion, depict evergreen trees arrayed from top to bottom in all their glory – along with the occasional bare tree trunk, road, rising sun and/or mountain.

Green is the dominant color of these images, because they are constructed mostly with short, straight green lines scrubbed back and forth: they look something like scratches and even more like pine or spruce or balsam needles.

It is as though the artist wanted to create an image with a double level of meaning: on the one hand, it is a macrocosmic branch or even a whole tree, but at the same time it is a microcosm of the needles on that tree.

Sometimes this works, sometimes it doesn’t. All fifteen of the pictures in this show are titled “Stehekin Summer 14” plus a number denoting that particular picture. All are equally interesting on this intellectual level.

Still, when they're good, they're very very good. You can almost smell the pine needles.