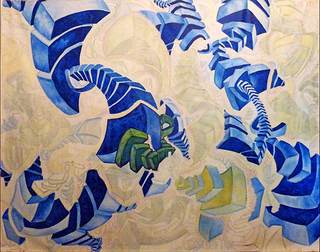 William Beier. White Nights (Homage to Hokusai), 2009-2013. UV Ink on canvas, 56 × 72 in (142.2 × 182.9 cm). Courtesy Walter Wickiser Gallery.
Every critic has a secret fantasy…..mine, last week, was that I could extract the few quite nice to very nice paintings that I saw while making the rounds in Chelsea from the context of the shows in which they appeared – in other words, I was fantasizing a gallery of my own….

Thus, for example, at Berry Campbell, we have “Noah Becker Presents ….Something,” organized by the gallery’s first guest curator, identified as “an artist and founder of Whitehot Magazine of Contemporary Art” (through February 6). From its group of 20 “nationally and internationally renowned artists” I would select paintings by two, Marcia Scott and James Walsh.

Admittedly, Scott’s “Christmas Island” (2014) is a poured painting, and by me at least drips and pours have been pretty well done to death. However, she does manage to bring a little something fresh to the idiom by locating her bold and iconic red poured shape on a jet-black field, and enlivening the red with gold and yellow.

Walsh’s “Angel Gate” (2014) is an example of his super-sophisticated combinations of molding paste and pigments, creating surfaces that while raised aren’t sloppy, but muscular and taut. In this case, the dominant central vertical rope-like forms are in a super-subtle white-and-gray range, with red to the left and green to the right.

Over at The Painting Center, we had “Color Matters,” a show of 42 small to medium-sized two-dimensional works (mostly paintings) by 12 artists, all but one female, and curated by 3 male artists (closed January 30). The gallery is a co-op, and the three curators are members, though the artists they chose were not.

Nearly everything was gestural or geometric, those two overly-popular polarities in the art world these days. The only artist who thoroughly escaped this dialectic was Stephanie Franks¸ whose three jazzy little cut-paper collages ran rings around the clichés. I’d include her blue, green and black “Open Door” (2015) in my fantasy gallery.

Other possible inclusions might be “VOxide Cobalt Blue” (2009), by Louise P. Sloane. True, it is yet another geometric abstraction, and a familiar format for this particular artist to boot, but the thickness of the paint gives it novelty in this context, and the color combo (blue on maroon) is lively, too.

Finally, from this field of 42, I’d select as Numbers 3 and 4 for my gallery two small smeary abstracts on paper by April Hammock, “Improvisation I” & “Improvisations III” (both 2015). Even if they were yet again gestural, they were not-bad examples of the type.

A Christmas-season group show that lasted into 2016 was “Rooted in Abstract Expressionism” at Denise Bibro (closed January 16). This is the second time I’ve seen a group of abstracts at this gallery & it seemed to me an improvement over the first, though at most I would still want only three of its 34 paintings in my fantasy gallery.

“The Game” (1960) by Yvonne Thomas, a somewhat gestural painting which hung at the entrance, had some attractive, gentle color combinations, but lacked organizational oomph. At the other extreme, the untitled mixed-media piece from 2015 by Nikki Geula (Number 21 on the checklist) had some firm organization – but its shapes were still that overly-familiar gestural, and, from a coloristic point of view, strictly limited: dark blues on a field of white.

Synthesizing opposites, “Love Goddess” (2012) by Francine Tint, combined vigorous organization built by flowing lines with a radiant palette of pinks, golds and blues. Here is an artist who knows and loves both Venetian color and Florentine design!

Instead, what we have is carefully painted compositions that rely for their effects upon the shapes that they depict. The resulting canvases are mostly not too simple, not too complex, somewhere in the happy middle ground between busy-busy and empty-empty.

For three out of the four artists here, I found their shapes (and colors) novel and appealing enough to rate inclusion of one painting apiece in La Galerie Halasz.

Most uneven of the three whose work still appealed to me was Kiyomi Baird. Her paintings in this show depict large gilded discs floating on silvery fields (or vice versa), but only with the painting in the main area of the gallery are three discs successfully melded with their field. Its appropriate title: “Menage à Trois (2015).

Also likable are some of the paintings by Joan Miller. They are crowded with flat shapes, but these shapes are difficult to describe. Although organic as opposed to geometric, they don’t have that biological cast so characteristic of biomorphic surrealism. Rather, they swoop and swirl. “Flying Colors #6” (2010) has rich and swirling reds, yellow and oranges, set off by slate blue and black.

Most successful is William Beier, whose canvases are dominated by curiously-shaped rolls and extravagantly distended little shapes. These shapes float against and rise above other equally curious piles of background environments.

Foregrounds and backgrounds utilize blues, greys, golds, mustards and olives in an idiom that combines the sinuousness of Art Nouveau with an angular machine esthetic. Best of the lot is "White Nights (Homage of Hokusai)" (2009-2013).

More than anything else, Beier's mechanistic Art Nouveau reminded me of the proto-cubist abstractions that the Paris-based Czech Frantisek Kupka was painting more than a century ago. How strange – but in its way – not too surprising that it should be necessary to go back to before the beginnings of abstract art in order to start out on a different path!

Mr. Beier produces fascinating stuff. I love the fact that he grounds his avant-garde work in history.