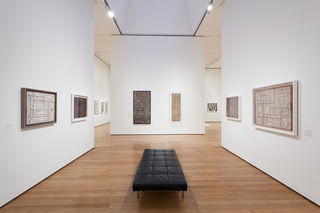 Installation view of "Joaquín Torres-García: The Arcadian Modern" at The Museum of Modern Art, New York (October 25, 2015–February 15, 2016). Photo by Jonathan Muzikar. © 2015 The Museum of Modern Art, New York
Why do we look at great art of the past? First, to enjoy it. Second, to remind us how much we have forgotten about its quality and how wise it is to refresh that memory so that we can use it to evaluate the present. For both reasons, I recommend not only the surprising inspiration provided by the moving museum retrospective of Joaquín Torres García but also the fine but more familiar gallery shows of Kenneth Noland and Jules Olitski.

Indeed, to judge from the recent proliferation of gallery shows for Noland and Olitski, both are hot properties these days. I have reviewed shows by both twice in the past two years.

The current Noland show at Paul Kasmin is “Kenneth Noland: Unbalanced” (through February 27). As with the Noland show at Castelli that I reviewed on August 1, 2015, the show is all crisply shaped canvases of the 1970s, and their colors again are the marvelously sophisticated ones at which Noland excelled (none of Stella’s “straight from the paint pot” for him).

If memory serves correctly, the Castelli show had seven paintings in which narrow stripes were on the edges of the canvas, whereas in this case, three of the six paintings on view are divided up into larger angular segments that comprise the center of the composition.

Of the paintings with the narrow stripes on the edges, the one I liked best was “Angle of the Night” (1978). It was also one that I liked in the Castelli show, and, as I described it there, I don’t feel the need to describe it again.

Among the three paintings with the larger segments, I liked the five-sided, pyramid-shaped “Orientate” (1976). Its dominant colors are pale greige, pale yellow and pale green, with little accents of black at the lower left and right, and brown at the top.

Having evidently enjoyed great success with its 2014 show of Olitski’s “Mitt Paintings” from the late 1980s and early 90s, Kasmin is exhibiting another experimental series that Olitski did a few years earlier, painting (with his usual varied implements) on irregularly shaped pieces of Plexiglas.

These paintings are assuredly very elegant & lovely, but paler than the “Mitt Paintings” and not as thickly plastered onto their Plexiglas ground. “Subtler” is perhaps the word I want. One can get a faint sense of the colored Plexiglas shining through, but the irregularly chipped edges were maybe just a tiny tad too artistic for meat-and-potatoes me.

I related most strongly to the two biggest, most regularly-shaped paintings here. One was “Wonder Focus” (1986), the big vertical (96½ x 48 inches) facing the street in the first gallery. It’s mostly a study in pale silvery greens.

The other was “Creation Stone” (1986), an almost equally big horizontal (47 x 91½ inches) in the second gallery on the wall to the left of the window. Its colors are mostly pale browns, with touches of pale blue.

At the Museum of Modern Art, we have the perfectly splendid show entitled “Joaquín Torres-García: The Arcadian Modern.” It’s the first US retrospective of this important Uruguayan modern in nearly 50 years (through February 15, but if you can’t get to MoMA before its show closes, there is also a very nice, though much smaller Torres-García show at Gary Nader, in Michael Rosenfeld’s old gallery space at 24 West 57th Street through February 27).

True, Torres-García wasn’t a trail-blazer on the scale of Picasso. He was born in 1874, eight years before Picasso, and (in the early years of the 20th century) he may have hung out with him at Els Quatre Gats in Barcelona, but he himself was a late bloomer.

He didn’t really move decisively into modernism until the later 1920s (by which time Picasso had long since moved on from cubism to his neo-classic thing).

Still, Torres- García belongs to that courageous band of experimental painters from the Western Hemisphere who leapt on the European avant-garde bandwagon at a very early stage and managed to create something distinctive and radical out of that experience which was all their own.

Among others of this generation, I would mention Marsden Hartley, Joseph Stella & Max Weber – nor do I think it is altogether coincidence that all four in their old age reverted from a maximally abstract style to one or another degree of representation.

Staying abstract in those years required a furious push against convention – and such a degree of fury may abate during one’s senior years.

At any rate, Torres-García, at his most memorable, wasn’t a pure abstractionist. The most striking works by him – generously represented in this exhibition – are those predominantly greyed-out or brownish, modestly-scaled paintings depicting grids with cryptic pictograms stationed within little box-like shapes.

Although clearly within the cubist canon, these works aren’t completely abstract, but hover in a magic middle ground between reality and fantasy.

Begun in the late 1920s and continuing on through the early 40s, they anticipate the early pictographs of Adolph Gottlieb by a couple of decades, and the coal-black or white boxlike constructions of Louise Nevelson by a slightly longer space of time.

But that’s not all there is to this show. Although Torres-García was born in Uruguay, his Catalan-born father took the family back to Spain when the future artist was 17, so he wound up studying art in Barcelona.

He also seems to have worked there with that master of Art Nouveau, Antoni Gaudí, doing stained-glass windows for one of Gaudí‘s lesser cathedrals, and taking a hand in his more famous church of the Sagrada Familia.

To judge from this MoMA show, Torres- García also did frescos for civic buildings in a semi-classic style that owed much to Pierre Puvis de Chavannes. Towering over visitors at the entry is an 18-foot-high Puvis-like fresco (transferred to canvas) depicting an enormous Pan-like flautist and bearing a mystical legend from Goethe’s “Faust.”

Combined with the last picture in the show, a semi-primitive representational image of “Figures with Doves” (done in 1949, the year of the artist’s death), the flautist anchors Torres-Garcia’s beginnings and endings in the rural confines of Arcady. However, I doubt that anybody would stage a retrospective of his work upon this basis alone.

What makes it memorable reflects not only his brief stay in New York (in the early 20s) but also his far more meaningful stays in Paris (briefly, in the early 20s, then longer and later, from around 1926 to around 1932).

In Paris, especially during this later stay, he gravitated toward the pure abstractions of Mondrian and other constructivists represented by the “Cercle et Carré” group.

In fact, with Mondrian and Michel Seuphor, he was a co-founder of this group, conceived as an ideological counterweight against surrealism. And, for those visitors who like looking at printed matter in vitrines, many examples of Torres-García’s passionate pamphleteering are here.

In the later 1930s, after he settled in Uruguay, and before reverting to figuration, he also went through a completely abstract phase. Some of these paintings are extremely powerful, too.

Also on view are early street scenes, pictograph-type paintings in color, collages, constructions and drawings – in all, some 190 works.

This may be a bit too much of a good thing, but their arrangement is on the whole sensible. Especially memorable is that crypt-like little space in the center of the third gallery. Here are arrayed, as in a little temple, a selection of the best of the gray or brown cryptographs. Not too many, not too few – and exquisitely placed.

“Joaquín Torres-García: The Arcadian Modern” was organized by MoMA’s Luis Pérez-Oramas, with the aid of Karen Grimson, curatorial assistant. After it closes at MoMA, it will travel to the Espacio Fundación Telefónica in Madrid (May 19 to September 11) and the Museo Picasso Málaga (October 10 to February 5, 2017).