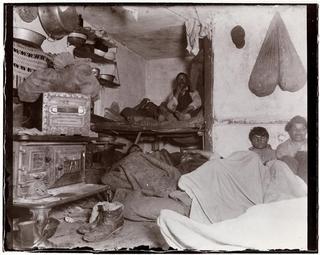 "Five Cents a Spot," photo by Jacob A. Riis, ca. 1890 Museum of the City of New York, Gift of Roger William Riis
Although I believe most of my readers prefer the esthetic to the documentary, I don’t automatically tune out when politics in art rears its ugly head. Case in point: I belatedly found absorbing “Jacob A. Riis: Revealing New York’s Other Half” at the Museum of the City of New York (through March 20, then at the Library of Congress in Washington, April 14 to September 5, and thereafter at Danish museums in Copenhagen and Ribe, Riis’s birthplace).

As curated by Bonnie Yochelson¸ an art historian and former curator at this museum, this exhibition is put together with more memorabilia than you have seen in a decade – books, magazines, newspapers, letters, vintage cameras, etc. etc.

All serve to chronicle the life and times of this Danish immigrant who was born in 1849, came to New York in 1870, and at first had to live the appalling life of the millions of poverty-stricken, mostly immigrant slum dwellers in the city at that time.

Then he found employment as a police reporter, and finally turned his attention to doing what he could to expose the evils of the tenements as a muckraker and crusader for better living conditions.

He would become a national figure in 1890 with the publication of his first book, the best-selling “How the Other Half Lives: Studies among the Tenements of New York.”

Initially Riis told his tale primarily through newspapers, magazines and books, but he also lectured effectively. By 1900, he had become famous enough to support himself solely as a lecturer, and he kept it up (against medical advice) until he died of heart disease in 1914, at the age of only 65.

Throughout, he employed photographs, and particularly the new media sensation of flash photography to get into inside rooms bereft of sunlight and document his arguments.

One of the most compelling displays in this show is an abbreviated recreation of a typical Riis lecture with lantern slides of ragged children, sweatshops, rag-pickers, street toughs, paupers being buried in Potter’s Field, narrow alleys and cramped laundry-hung courtyards with silent witnesses – men, women and children – just standing there.

Among the most harrowing photographs are those that show groups of men or women crowded in by the dozen for a night's sleep on beds or floors (they paid 7 cents a night for a bed, 5 cents for a spot on the floor).

Even more unforgettable is the square gallery-within-a-gallery surrounded on four sides by 30 or 40 small individual photographs of such subjects.

A big flat map of Manhattan is laid out in the center of this space, with arrows pointing to the most disgraceful neighborhoods. Somehow that helps to pull it all together.

Not all of the many fine photographs in this exhibition seem to have been taken by Riis himself. He didn’t see himself as an artiste, just a hard-working journalist, and if somebody else could take a better photo, he was only too happy to use it – and keep it for his personal archives.

Yet somehow, mysteriously, all these photos (no matter who took them) still bear the stamp of his lusty idealism.