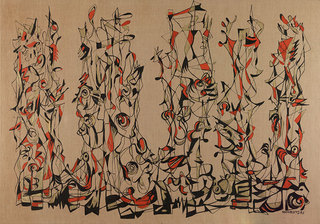 Norman Lewis, Title unknown, 1953. Oil and metallic paint on canvas, 41 1/2 x 71 in. Collection of the Newark Museum, Newark, New Jersey © Estate of Norman W. Lewis; Courtesy of Michael Rosenfeld Gallery LLC, New York, NY.
One nice thing about my hometown is its central location – one can go north to see art, or one can go south, so that’s what I’ve done – north to see The Clark Art Institute in Williamstown, Massachusetts, and south to Philadelphia, to look in on a thunderous Titian at the Philadelphia Museum of Art, and more importantly to linger over the full-dress Norman Lewis retrospective at the Pennsylvania Academy of the Fine Arts.

As I am listing these shows more or less in order of their closing dates, I shall deal first with my southern journey & second, with my northern one.

The main reason I went to Philadelphia was to see “Procession: The Art of Norman Lewis” at the Pennsylvania Academy of the Fine Arts (through April 6).

But I am always willing to make a detour to see a major Titian, and one was part of the boutique exhibition entitled “The Wrath of the Gods: Masterpieces by Rubens, Michelangelo, and Titian” at the Philadelphia Museum of Art (closed December 6).

Nor was I disappointed. “The Wrath of the Gods” was officially put together to show how Rubens borrowed and built upon earlier masters in creating his own masterful “Prometheus Bound” (ca. 1611 – 1618), one of the treasures of the Philadelphia Museum’s permanent collection.

The two prime sources for this image of the Greek Titan bound and tortured by having his liver eaten by eagles seem to have been a black chalk drawing of “Tityus” (1532) by Michelangelo, on loan from the royal collections of Queen Elizabeth II, and a large oil on canvas also of “Tityus” (1548-49), by Titian and on loan from the Prado..

Tityus was tortured in the same way, and he had been a bad boy instead of a good one, Prometheus having been punished for bringing the gift of fire to humanity, while Tityus had tried to rape Leto, the goddess of motherhood. Still, isn’t it funny how sometimes evil is more inspiring than virtue?

Some of the other Old Master paintings in this show were interesting, the Rubens was tremendously rewarding, but the Michelangelo was at least as effective, and the Titian walked away with top honors.

Man, was it impressive --and not only in its subdued but lambent colors, ranging from flesh colors to golds to blacks. Even more striking was the composition, with the central figure seen in just the right proportions, fully filling up the canvas and centered on it, with an all but perfect balance between verticals and horizontals. Did this guy know how to construct a composition or what?

But let us move on to PAFA, and the first full-dress retrospective of this distinguished African-American since his death in 1979 at the age of 70. This Norman Lewis show is almost exhaustive in its completeness, with 90 paintings and works on paper from the early 1930s to the late 1970s, as well as Lewis’s handmade dolls and other archival materials.

It’s an excitingly sensitive show, put together with great taste and illumination. In fact, although this is something of a rarity in contemporary museology, I found almost all of the wall texts and picture labels on target.

After “Procession: The Art of Norman Lewis” leaves PAFA on April 6, it will travel to the Amon Carter Museum of American Art, in Fort Worth, Texas (June 4 to August 21), and the Chicago Cultural Center, in Illinois (September 17 to January 8, 2017).

New York, to be sure, has also recently seen a museum show with much work by Lewis in it, since the Jewish Museum combined it with work by Lee Krasner in “From the Margins: Lee Krasner and Norman Lewis, 1945 – 1952” in the fall of 2014.

Although that show had some spectacular passages, both artists suffered from the curatorial need to incorporate work by each as similar as possible to that of the other. In the process, some of the individuality of both got lost.

In Philadelphia, the viewer gets a much better sense of what Lewis was all about, and where he came from. More specifically, he came out of a vivid social realism and a vernacular tradition (as opposed to Krasner, who moved on from academic portraiture to modernist abstraction with barely a nod to the world around her).

The opening gallery (entitled “In the City/Looking at Art”) shows him portraying fellow Harlem citizens in a style that starts with straight social realism – as in two 1933 studies of a seated man, one wash on paper, one oil on canvas, both showing him wearing a hat and suit. This garb would appear to make the man a street person, or anyway down on his luck.

Rendered with brighter, more cheerful colors and a more cubist approach are two oils of women, “Girl with Yellow Hat” (1936), and “Two Women Reading (1940). They are followed by more abstracted and even livelier vignettes, ranging from the critical, in “The Dispossessed (Family)” (1940) to the celebratory “Hep Cats” (1943).

Yet this interest in the vernacular was counterbalanced by a passionate interest in art of other artists and societies. This same entry gallery boasts three masterly & ultra-realistic pastel renderings of African masks made in 1935, and based upon work Lewis saw in an exhibition of African art held at MoMA.

Almost contemporaneous is “Fantasy” (1936), a small, vigorously colored abstraction that can be read as homage to Kandinsky. The more one looks at it, the more one realizes that this represents the origins of Lewis’s leap into near-abstraction – though that leap would not take place for another decade. Who knew? And what great taste that shows.

But Lewis wasn’t only one of those painters who always take themselves seriously: he also had a comic side. This is demonstrated in that same first gallery by a deliciously caricatured little wood and plaster of Paris man-figure wearing a straw-boater and a red-and-white striped shirt. Was it done in the 1940s? Is it maybe a self-portrait? Again, who knows?

The second gallery in this show has only a handful of paintings & is entitled “In the City/1945.” It shows Lewis absorbing the abstract premises of cubism and moving on toward his own mature style.

Some of the titles here are unknown, but all seem to have had titles originally – suggesting that however abstract Lewis may have become, he still thought of his work as bearing some relation to the external, visible world.

For example, two bona fide abstractions in this gallery carry non-committal titles, “Untitled (Architectural Abstraction”) and “Composition I.” Both are handsome but not there yet in terms of Lewis’s mature style. A third in this gallery, with lots of red & wizard diagonals, is well on the way – and called “Title unknown (Jazz Club).” And it’s in jazz clubs & the world surrounding them that Lewis comes into his own.

The third gallery, with 16 paintings dated from 1946 to 1953, is for me the highlight of the show. Lewis is just emerging into his own right and creating definitive work.

Red, whites, browns, blacks and golds are the colors at which he excels (though he also uses others on occasion). He plays with his colors in many ways, sometimes with pointillist showers of elegance, sometimes with verticals skeins of lines.

Among the paintings that stood out for me was the wide pale brown canvas done in 1953, title unknown, but recently acquired by the Newark Museum. Its series of delicately outlined vertical columns are done in red & black oil paint and gold metallic paint.

It’s similar to the smaller “Too Much Aspiration” (1947), although that is only an opaque watercolor, ink and graphite on paper.

And – no matter what anybody says – there are powerful suggestions in both paintings of a group of standing human figures, especially as two more paintings in this same gallery are composed of very similar groups of vertical lines, and are both called “Jazz Musicians.”

And equally or even more powerful is the small oil on paper with a brooding human head on it, called “Untitled (Self-Portrait)” (1949).

We are also going to have to broaden our definition of “abstract expressionist” to include painting with small delicate shapes as opposed to the large, bold, iconic and in-your-face type of imagery favored by Motherwell, Hofmann, Rothko, Barnett Newman and so on…still, there is no reason why this cannot be done.

I personally however continue to feel that Lewis, with his reclusive delicacy and elegance, belongs most naturally among those semi-abstract painters who came to the fore in the late 1940d, before the abstract expressionists, a group hitherto led by Mark Tobey & Morris Graves.

To me, Lewis towers over Tobey and Graves – both of whom were represented by Marian Willard, the dealer who gave Lewis several shows, starting in 1949.

Come to think of it, Willard also represented David Smith during this period and Smith is another artist who, though grouped with the abstract expressionists, viewed his standing vertical sculptures as related to human beings.

Specifically, he related them to young women – even called them his “girls.”

“Procession: The Art of Norman Lewis” is located in PAFA’s Samuel M. V. Hamilton Building, next door to the original landmark building. It was guest-curated by Ruth Fine, with the assistance of PAFA’s Robert Cozzolino.

In the landmark building itself there is also a small show, “Stone and Metal: Lithographs and Etchings by Norman Lewis,” and there are lots of goodies here, too. Don't miss it!