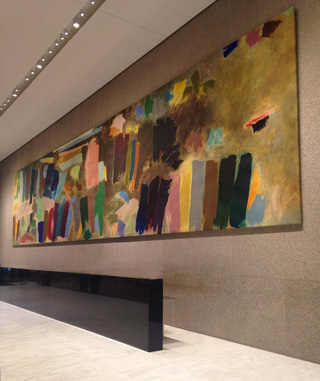 However, to get the most out of it, you really have to be there. The available photographs just don't do it justice because the center of the building's ground floor is occupied by the elevator bank. As a result, the space in front of "Crossing" (and in front of the reception desk positioned beneath it) is too narrow to allow a photographer to stand back and view the painting in its entirety. The best photographs of it so far can capture it only an angle--but possibly, at some point, some miracle worker will come along with a wide-angle lens or some other ph0tographic legerdemain and we shall be able to carry this memorable occasion in all its glory around on our tablets & smart phones.

Elsewhere in the ground-floor lobby are 6 more monumental Dzubas paintings, plus one of his inimitable small “sketches” for one of them (the 24-foot-long “Procession”). In this group are three more memorable large paintings that were included in the Dzubas show at Loretta Howard last spring, and that I analyzed in detail in my posting of April 26, 2015. They are “Nebel” (1971), “Foen” (1974), and best of all, “Chenango” (1973). New to me, and palely beautiful, is the tropically-colored, succulent “Aruba” (1969), hung high above the elevator bank (on the side of the lobby away from the reception desk). Several additional smaller paintings, plus some of the very small sketches, are on view in the “Sky Lobby” on the 24th Floor – if you can talk the attendant in the reception desk into letting you past the barriers guarding the elevators. The monumental “Crossing” will remain on view until November; all the rest of the show comes down after April 9.

It is rarely that I am tempted to quote from the literature that accompanies a show, but the brochure to this one contains an essay by Lewy with so much useful information that I have to quote it at length. In the beginning is the saga of the ownership of “Crossing,” which tallies with the evolution of New England banking: Shawmut was acquired by Fleet National in 1995, which in turn merged with Bank Boston in 1999 to become Fleet Boston, and was finally swallowed up by Bank of America in 2004. Thus the current owner of “Crossing” turns out to be the Global Art and Heritage Programs for Bank of America (though it was still in Boston when first “unveiled” for viewing after 24 years on August 31, 2015).

Lewy is a tenacious & insightful scholar when it comes to unearthing historical data. This shows in her discussion of Dzubas’s sources and predecessors, which include sources as varied as Renaissance to rococo muralists like Giotto and Tiepolo --and the early training he received when apprenticed as a youth to a decorative painter (much like Braque before him). Even better, she has relied upon Dzubas’s friends, assistants and fellow artists, ranging from Malinda Hatch and Wes Frantz to Darryl Hughto, Susan Roth, and James Walsh, for information on his painting techniques, and come up with some surprising conclusions.

It turns out that, although Dzubas too worked in his later years with Magna, he didn’t stain his paints into unprimed canvas, like so many of his color-field colleagues. Instead, according to Lewy, he “applied paint on two or three layers of gesso, which he allowed to seep through his pigments and fill his color shapes with light as if backlit…..To enact his vision of abstraction where color fills the interstices of a porous, yet shallow surface, Dzubas would brush his paint, only pouring paint or turpentine for the sake of expediency – to flood the large areas he needed to cover with pigment, controlling and spreading with the brush. He would then brush out the paint into what became for him archetypal shapes, scrubbing, wiping, and pressing his pigments into the canvas….”

Lewy’s monograph “Friedel Dzubas: The Size of Life” is forthcoming from the Artists Book Foundation in 2017. It should be worth a look.