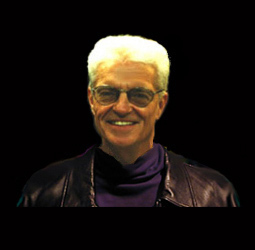 Ken Moffett – curator extraordinaire, museum director, art critic, art historian and most importantly, dear friend to many artists – died on June 21 at the age of 81, at his home in Stamford Connecticut. The cause of death was pneumonia compounded by complications from the heart surgery he underwent last November. He is survived by his wife, Cynthia Horvath Moffett; his daughter, Kathryn (Kay) Moffett; his son-in-law, Neil Parker; and his granddaughter, Matilda Moffett Parker.

I myself didn’t meet Moffett until the winter of 1983, after I’d started publishing my series in Arts Magazine on “Art Criticism & Art History: The 1940s vs. the 1980s.” I was a member of AICA (the International Association of Art Critics), and so was Moffett. We both attended a symposium in New York that they’d organized—in fact, he may have been one of the speakers.

During the lunch break I introduced myself to him. He recognized me upon the basis of that series and said I must come up and visit Boston sometime.

Shortly thereafter, I took him up on his invitation. I had lunch with him and Lucy Baker, then his fiancée, at the Museum of Fine Arts, Boston, where he had been its first curator of modern and contemporary art since 1971.

After lunch, Baker drove me out to see “Abstract Art in New England,” a show of younger artists in the area that Moffett had organized for the Danforth Museum in Framingham. On the way back, we stopped at the building where Baker's studio was located.

She showed me some of her black paintings, and I was introduced to one or two other artists who also had studios there. I was impressed by those paintings, but I think maybe even more by the whole milieu that seemed to be thriving in the Boston area for younger modernist painters.

I’m not saying that Moffett alone was responsible for it – I think the good people at the Boston Museum School also had something to do with it, to say nothing of the artists themselves – but even in retrospect I’d give Moffett much of the credit.

When he was finally booted out of the MFA by an anti-modernist claque the following year, a number of the artists who had benefited from his aegis relocated, and the museum itself took a reactionary turn.

I didn’t know it, but by the time I met Moffett, relations between him and Clement Greenberg were already decidedly strained. The real problem – in my opinion – was (as it always was with Greenberg) not style but substance.

Not how politely or rudely the individuals concerned behaved in their relationships with other humans, but what art they preferred – and preferred to celebrate.

Moffett was becoming more and more committed to those younger artists who would within the next decade become known as “The New New Painting” and (with few if indeed any exceptions) Greenberg didn’t share this enthusiasm.

To the extent that he favored younger artists, they were different ones. But all I could see, on this first acquaintance with Moffett, was the very great community of interest these two men had concerning the art of the recent past.

I think I already owned Moffett’s fat Abrams books on Jules Olitski & Kenneth Noland. I know that I’d attended the 1973 Olitski exhibition that Moffett had organized for the Boston museum but that traveled to the Whitney in New York.

I think I may even have been slightly amused at the way that Moffett in his speech patterns appeared to have been influenced by Greenberg (I was to be amused by this same trait in Olitski, the following fall).

I know I was impressed with the beautiful color-field paintings currently hanging in the Boston museum on loan from the collection of Graham Gund – who, I felt, must have benefited from Moffett’s eye and advice.

For an obituary, however, it’s necessary to go back a bit and tell about that period in Moffett’s life that I don’t know personally—but that I can piece together from those entries that he presumably filled out himself in past years for Who’s Who in American Art, more recent material he posted at his website (Moffett’s Artletter 2.0), and some Columbia library material.

So, then –he was born on November 26, 1934, and raised in East Orange, New Jersey. He spent six years in college, the first two at Seton Hall in New Jersey, the following four at Columbia in New York, most likely receiving his BA there in 1958 (according to Who’s Who in American Art, though his website says 1960).

While in college, he became interested in contemporary art through a fellow student, Robert Whitman. Since Whitman was theatrically inclined, he introduced Moffett to John Cage, Allan Kaprow & Robert Rauschenberg, so Moffett presumably got all that avant-garde dada out of his system early.

Other influences, however, led him to a greater appreciation to what he called The New York School, and what I gathered was abstract expressionism and perhaps also its offshoots – those influences consisting of visits to MoMA and the tutelage of Meyer Schapiro at Columbia.

Anyway, the budding scholar was interested enough to go on to Harvard for graduate work, taking his MA in 1962, and his PhD in 1968. There he became part of a group of five passionate would-be modernists.

Four of them (including Moffett) would go on to contribute their insights to the modernist enterprise: the other three were Michael Fried, Charles Millard & Kermit Champa.

The fifth was Rosalind Krauss, who started out as a modernist, but later on (as we all know) jumped ship, and became a postmodernist instead.

Moffett had become president of a graduate student association at Harvard, with responsibility for staging a lecture series. He had already become interested in a German art critic named Julius Meier-Graefe who had attempted to introduce French impressionism to the German public, and thought, why not invite a lot of contemporary art critics for this lecture series?

Fried, who had known Greenberg since his own undergraduate days at Princeton, helped draw up the list – and Greenberg was on it. The rest, as they say, is history.

Moffett was so taken by Greenberg that he dedicated the book that came out of his dissertation on Meier-Graefe to him. Published in Germany, it became the victim of a vicious hatchet job masquerading as a review in the Burlington Magazine by an aging German art historian specializing in archaeology and the Renaissance, but also chair of the art history department at UC-Berkeley.

When I read it last week, I was vividly reminded of the very similar hatchet job performed by Kirk Varnedoe in Arts Magazine on the book about Degas that Charles Millard had gotten out of his Harvard dissertation.

Since I don’t think Harvard was in the habit of handing out doctorates in exchange for eyewash, those dissertations can’t have been all that bad. But the price one paid – and to a certain extent still pays – for being a Greenberger was -- and is -- too often this sort of invective.

What Moffett accomplished in his 81 years is pretty staggering. In addition to those 13 years at the MFA Boston, he taught at Wellesley from 1968 to 1979, and became a full professor there.

After he left the Boston museum, he founded the original printed version of Moffett’s Artletter, advised collectors, and then became director of the Museum of Art Fort Lauderdale (now the NSU Art Museum Fort Lauderdale) from 1989 to 1996.

In the mid-90s, he also participated in the founding of the Museum of Contemporary Art Denver, and (so I understand) was asked to become its director, but preferred to remain on the East Coast.

His endeavors on behalf of the New New Painting, especially in the years since, have been remarkable – the group has exhibited in Prague, Brussels and Paris as well as New York, Connecticut and Canada.

Moffett’s publications are legion – not only books and exhibition catalogs, but also articles in Art News, Artforum, Art in America, the New Criterion and Art in New England –whenever he had something to say, he said it.

And, although his great enthusiasms among the older artists were for Olitski, Poons, Caro, Jack Bush, Friedel Dzubas & Morris Louis, he also endorsed artists not in the Greenbergian canon, from Odd Nerdrum & Fairfield Porter to Bram Bogart.

In other words, he has been his own man throughout—and for that reason if no other, he will long be remembered by his many friends.

hi Piri Thanks for this tribute. ps. Clem did like Fairfield Porter