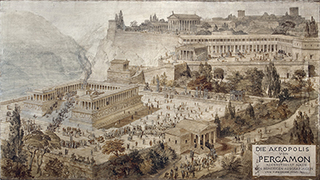 The Akropolis of Pergamon. By Friedrich (von) Thiersch, 1882. Pen and ink with watercolor on canvas, H. 78 in. (198 cm), W. 11 ft. 53/4 in. (350 cm). Antikensammlung, Staatliche Museen zu Berlin (Graph 91). Image: © SMB / Antikensammlung.
I can’t remember when and where I was first introduced to Hellenistic sculpture, but almost in the same breath, I was told that it was decadent, following as it did the archaic of the 6th century BC and the classic of the 5th.

This insight must have been given to me a long time ago, back when we were living in a more classic context—because, of course, decadents don't usually know when they’re living in a decadent period, but it’s almost inevitable that when they are, they relate most strongly to previous periods of decadence as well.

This I suspect is the instinctive and most likely unconscious reason that The Metropolitan Museum of Art has in the not-too-distant past given us a show of late (decadent) Byzantine art and moreover keeps revisiting the over-ripeness of Caravaggio—who was a nobody back when modernism was in its fullest flower but has become a darling of the postmodernists.

And now we have “Pergamon and the Hellenistic Kings of the Ancient World” at the Met (through July 17). If you haven't already seen this splendid show, I suggest you rush to get there, as it has only 10 more days to run.

This isn’t the largest exhibition that The Metropolitan Museum of Art has ever staged. It occupies only seven spacious galleries, but that is more than enough to show us the glories of this style—for at once I should say that “decadent” doesn’t necessarily mean bad. It just means—well, different.

And Lord knows this show is big enough—with 265 items in it--so that I can’t begin to dilate upon all of its treasures. Therefore I shall spare the reader my thoughts on its gold jewelry, vessels of glass, engraved gems, medallions, coins, ceramics, armor, and so forth.

Instead, I shall focus on its sculpture, since to me the fine arts – as opposed to the applied arts -- are where the distinctive style of any era best manifests itself.

And this show is generously supplied with beautiful examples of sculpture--its checklist itemizing about 45 bronzes, 85 marble works and another dozen in terracotta.

At the same time, we should recognize that these works must speak – or appear to speak -- for enormous amounts of time and space.

The Hellenistic era, after all, is said to have lasted for three centuries--from the death of Alexander the Great in 323 B.C. to the suicide in 30 B.C. of Kleopatra VII of Egypt, better known as the Cleopatra of Shakespeare, Shaw, Cecil B. DeMille & Elizabeth Taylor).

The area ruled by the “Hellenistic kings” of this show’s title begins with lands inherited by Alexander from his father, Philip II of Macedon.

Alexander vastly multiplied this territory by conquering almost all of the rest of the ancient Western world, in a rampage beginning with his accession to the throne at the age of 20 and ending only with his mysterious death 12 years later.

He was a brilliant strategist and military experts are still studying the tactics he employed. The empire he left behind him stretched from the Adriatic Sea to the Indus River in India.

After he died, his generals, friends and relations spent decades fighting among themselves, but eventually the Alexandrian empire more or less settled down into four principal kingdoms, all dominated by Graeco-Macedonian dynasties.

They were the Antigonid in Greece and Macedon, the Ptolemaic in Egypt, the Seleucid in Mesopotamia and Central Asia, and the Attalid in Anatolia (otherwise known as Asia Minor and occupied today by Turkey).

In one form or another these kingdoms survived until, one after another, they were assimilated into the Roman Empire.

I say more or less settled down, because it seems that this whole period was fraught with conflict, not least because those barbarians who centuries later would overrun the Roman Empire were already making trouble.

But at the same time the ruling classes of those four main kingdoms were wealthy and had time and money to build museums, temples and libraries, to say nothing of creating much in the way of the decorative arts.

Even though we have only remnants and Roman copies of most of the sculpture from this vanished civilization, to attempt to cover three centuries and all four dynasties would be an impossible task.

I don’t think that everything which fits this geographical area and time frame could have been included, nor was it.

I didn’t see any of the “Graeco-Buddhism” that seems to have developed in what is now Afghanistan, nor any of the statues and temples made during the Ptolemaic period in Egypt but continuing to look more Egyptian than Greek.

This means the “naturalistic,” weird or bizarre, twisted or contorted bodies, grotesque masks, figures dying, dwarfs, hermaphrodites, windblown drapery, and frenetically curly beards, plus what I call “elephantiasis,” by which I mean a tendency toward oversized art (although I saw many fine little sculptures in this show as well).

All of this is distinctively different from the calmness, balance, harmony, purity, idealism, serenity and perfection of the best sculpture from the classical period – though actually in this show, too, there are a lot of sculptures that could be said to fit this description.

Indeed, the most dramatic part of the current exhibition at the Met is those galleries centering on the work from Pergamon, which was the capital of the Attalids. The city was situated in western Asia Minor, close to the Ionian Sea, meaning that it was in or near those areas that had already for centuries been inhabited by Greeks.

The Attalid rulers moreover maintained close contact with Athens, donating sculpture to its holy places as well as building and decorating its own.

The acropolis at Pergamon was home to several major temples, but none larger or more celebrated than the “Great Altar” near the base of it, believed to have been dedicated to Zeus.

Pergamon was excavated by German archaeologists in the late 19th century. There being no rules about exporting antiquities in those days, they trucked many of their discoveries back to Berlin, especially the major parts of the Great Altar.

In Berlin the cream of these sculptures were housed in the Pergamon Museum on Museum Island.

Many of these sculptures were reassembled on Museum Island in a display that approximated (on a much smaller scale) the Great Altar itself, but just now the Berlin Pergamon Museum is undergoing renovation, so it agreed to generous loans of its treasures.

As a result, approximately 30 percent of the works on display at the Met come from Berlin.

They are enhanced by the inclusion of a large-scale color photograph of the original acropolis as it looks today, which almost magically alternates with a rendition of what it might have looked like back then .

The show also boasts two large 19th century German paintings hopefully recreating the original appearance of the acropolis, and a scale model of the Great Altar made in 1995 in Poland.

Most importantly, from the standpoint of showmanship, one gallery at the Met has been sumptuously redecorated, and not only with large and mostly peaceful three-dimensional and relief sculptures of gods, goddesses and the occasional horse from the Great Altar.

Surrounding these displays and looming above them are three walls with drawings & photographs high upon them & all around the gallery.

These images show us some of what is left of the eventful and vehement frieze that surrounded the altar & its simulacrum in Berlin, a frieze that depicts an epic battle between the Gods and the Giants with all the frenzy associated with the Hellenistic “baroque.”

“Pergamon and the Hellenistic Kingdoms of the Ancient World” was organized by the Met’s Carlos A. Picón & Seán Hemingway, with the assistance of other members of the museum’s curatorial staff and guest curator Ariel Herrmann, an independent scholar.