“A STRANGE NEW BEAUTY:” DEGAS & THE MONOTYPE AT MOMA 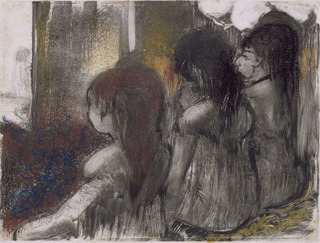 Edgar Degas (French, 1834–1917). Three Women in a Brothel, Seen from Behind (Trois filles assises de dos), c. 1877–79. Pastel over monotype on paper. 6 5/16 x 8 7/16 in. (16.1 x 21.4 cm). Musée Picasso, Paris.
There were four giants of impression, four historic heroes who banded together to display their work at the first impressionist exhibition in 1874, and withstood the barbs of more conventional observers to create a new and historic style. They were Paul Cézanne, Claude Monet, Auguste Renoir & Edgar Degas.

To me, Cézanne was the greatest--better than Picasso, Pollock & maybe even Matisse. Monet’s dedication to working sur le motif and with a loose “unfinished” style became the model for generations to come of impressionist painters all over the Western world. Renoir aided Monet in this endeavor, and surpassed him in the depiction of lovely women. I love the work of these two masters as well.

Degas I deeply respect, but (thinking it over in connection with this handsome & stimulating exhibition) I’ve never been able to really love him. Maybe it’s because of the cold eye with which he viewed women.

He was obviously fascinated by them, but – like the lifelong bachelor that he was – he saw them somehow as animals rather than humans, interesting subjects whom he could depict with the cold eye of a scientist – or a voyeur -- in a variety of uncomfortable poses.

Maybe it’s because he wasn’t really at home with color. There is a highly illuminating label accompanying one of the pictures in the current show, “Edgar Degas: A Strange New Beauty” at the Museum of Modern Art (through July 24).

“According to a friend,” the label reads, “Degas said that if it were up to him, he would have worked only with black and white, but added, ‘What can you do when everybody is clamoring for color?’ ”

It is devoted to his lifelong passion for monotypes, and two-thirds of the 180 works in this show are in this predominantly black-and-white medium (the remaining third run the gamut from oils and pastels to drawings and memorabilia).

These landscapes are nearly & radically abstract but even though I’m very interested in abstraction, I couldn’t work up too much enthusiasm for these.

The most fascinating monotypes in this show are the series dealing with prostitutes in brothels.

With their hair down girlishly loose over their shoulders, they lounge nonchalantly around , sometimes on high-backed Victorian poufs—naked (except occasionally for knee-high stockings or a filmy negligée) and with pubic and underarm hair showing, waiting for les clients.

Sometimes a client is portrayed – fully-dressed and looking a lot more uncomfortable than these working girls. Still a bit shocking is the image of a naked hooker about to sit down on a bidet.

And there are lots of pictures of other working women – principally ballet dancers, those little rats whom the artist forced to balance on their points for hours on end, but also singers in the cafés concerts.

Both types are often portrayed in the ghastly glow of theatrical footlights that light their faces and bodies from below and make them look like death warmed over.

Then there are those nude women angularly toweling themselves after taking baths, twisted into impossible positions-- women whom one must assume were professional models.

On the other hand, I didn’t notice any shop assistants in millinery stores – another subject that Degas dealt with in oils. Nor are there any horses, with or without their jockeys.

The emphasis in this show is on the technique of monotype, which is explained in detail in the wall texts and on the labels.

It enabled Degas to develop many fresh and different ways of “mark-making,” including (according to the show’s press release) “wiping, scraping, scratching, finger painting and rendering by removal.”

This emphasis on the “science” of a technique (as opposed to formal appreciations of color, composition, etc.) is all too typical of postmodernism.

However, if it can persuade gallery-goers to at least come and look at what, after all, is some very fine art, then I’m all for it. And, from what I could see, this show didn’t lack for admirers.

I might add that the fifth and last gallery of it bursts into color, thanks largely to the many oil paintings in it.

This is because, rather than devoting itself to monotypes per se, it tries show how Degas was influenced not only by the medium of monotype but also the ideas behind it – ideas of repetitions of and variations upon single themes.

“Edgar Degas: A Strange New Beauty” was organized by Jodi Hauptman, Karl Buchberg, & Heidi Hirschl, all of MoMA, with the aid of Richard Kendall, an independent curator and scholar.