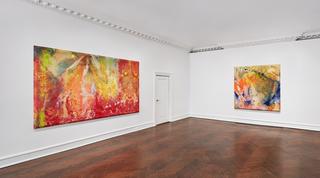 Sam Gilliam exhibition at Mnuchin Gallery. Left, "Spread;" right, "Spring Thaw." Photography Tom Powel Imaging. Artwork © Sam Gilliam.
An exhibition that surprised me very pleasantly was “Sam Gilliam: 1967-73,” at Mnuchin (through December 16). From what little of his work that I’d seen before, I entered this show with not too high expectations.

A native of Mississippi born in 1933, Gilliam received his artistic education in the South, at the University of Louisville in Kentucky. He took his BA there in 1955 and his MA (after a two-year stint in the armed services) in 1961. Then he headed for the nation’s capital, and soon became a member in good standing of the Washington Color School.

For an African American to paint abstractly was somewhat controversial in that tumultuous decade. African American artists were being encouraged to dramatize their racial sufferings with representational work, but Gilliam stayed the course.

Already in the 1960s he was known for innovations such as draping his colorfully stained canvases loosely instead of stretching them over frames – or, when stretching them, mounting them on raised canvases with beveled edges (the better to offer a counterpoint to the supposed Greenbergian canon on “flatness”).

Prior to this exhibition, as I say, I hadn’t been very impressed by Gilliam. Then again, I had seen only occasional examples of his work – always the draped, not very successfully draped, and with very subdued, not to say muddy colors.

This show, however, with fourteen paintings, really impressed me. On the basis of the best paintings in it, I’d say Gilliam is at least in a class with the best of those talented Washington Color School painters who never quite made it into Greenberg’s inner circle, artists like Gene Davis, Howard Mehring, Alma Thomas & Thomas Downing.

I could be wrong about this, but I certainly have the impression that all of these artists have in the past few years been receiving more attention in New York than they did in the 1960s. I am now happy to see that Gilliam is also receiving his just due, as this is his first New York appearance in nearly twenty-five years.

Most of the paintings that to me were standouts were stretched paintings on the canvases with beveled edges. They were “Natural” (1971), with lovely blues in the center, surrounded by golds and with red touches at diagonal corners; “Spring Thaw” (1972), with blues and oranges on a pale green field; and “With Blue” (1967), a very tall and pale painting with a misty gray-green field and narrow vertical silvery stripes (created with the use of aluminum powder).

Equally effective were “Temple Fire” (1970), a striking conflagration in reds and yellows, despite being slightly off-center; and “Frost I” (1973), which despite its title looks more like a night sky, with dark reds and greens underneath and star-like spatters of mint, baby blue, white and bits of black.

Another lively part of this symphony of color is “Spread” (1973), the 9½ -foot-wide horizontal with beveled edges that hangs in the place of honor, facing the entry to the gallery, with a vivid red field and a wild array of spatters in contrasting hues on top.

However, I was also very attracted to “Bow Form Construction” (1968), the 10-foot-high and 28-foot-wide perfectly balanced and very majestic “drape” hung facing the top of the stairs that lead to the second floor of the gallery. Pale blue below and pink above, it is very effective within the “rotunda” area where it is hung. None of the other three “drapes” in the show worked for me, but this one did.