THE STEEL BENEATH THE SILK: WATTEAU’S SOLDIERS AT THE FRICK 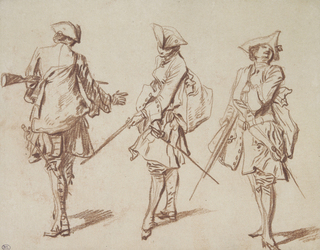 Jean-Antoine Watteau (1684–1721). Three Views of a Soldier, One from Behind, ca. 1713–15. Red chalk, with black ink framing, 6 ¾ × 8 5/8 inches. Musée du Louvre, Paris (RF 51752). Photo: © RMN-Grand Palais / Art Resource, NY
Jean-Antoine Watteau (1684-1721) is best known as the painter of mysterious theater folk and ethereal parables of silken dalliance called fêtes galantes. But this exquisite little exhibition of his work at The Frick Collection depicts more warlike subjects – and reveals the steel beneath his silk in more ways than one.

The show is called “Watteau’s Soldiers: Scenes of Military Life in Eighteenth-Century France” and is misleadingly modest in scale.

It occupies only the front gallery in the museum’s lower-level special exhibition space, and displays only four of Watteau’s surviving military paintings and twelve red chalk studies, some of them related to the paintings on view.

None of this work is very large, either -- but what it lacks in scale, it more than makes up for in muscle—especially the drawings. And, although the little paintings in this show are invariably charming, the ongoing surprise is in the drawings.

Watteau’s coloristic gifts, after all, shine forth in all of his paintings – not only the unfamiliar ones in this exhibition, but the more famous ones as well.

Nor is this command of color too surprising, when you consider that he came from Valenciennes in the Nord department of France. This is all Flemish country -- on the border with Belgium, the same department where Matisse was born and raised, and only a hop, skip and a jump across the border from Antwerp in Belgium, home of another master colorist, Rubens (in the 17th century, when he was alive, Belgium was still the Spanish Netherlands).

Something about this cool, misty, Northern climate, maybe, contributes to sensitivity among artists to color???

What tends to get forgotten is that in the early 18th century, this conflict was (at least temporarily) resolved in the art of Watteau, whose mastery of color was equaled by his mastery of line.

His drawings are so powerful that they have become almost as prized as his paintings, and this show is a grand place to appreciate their subtle power.

Most of these drawings seem to have been made in military camps and halts made during marches, with soldiers standing, sitting or lying down and seen from different angles.

They may well have been posing for the artist (perhaps in return for a few sous) and there are usually two, three or four of such studies to a page.

They are almost all clad in regulation 18th century military costumes and outfitted with regulation arms: tricorn hats, knee britches, waistcoats, and skirted jackets, with muskets and steely swords (though one of Watteau’s drawings shows three soldiers wearing capes, which are distended by the swords underneath).

Presumably the muskets were for when the enemy was at a distance, and the swords for close encounters. And do those swords look sharp! The NRA would have loved it.

But there is nothing, really, very warlike about Watteau’s scenes of the military, neither the drawings nor the consistently lovely paintings. All have a dreamlike quality of motion suspended.

And how charming this can be, whether it’s the soldiers themselves or the occasional scene of camp followers – wives, mistresses and I think also working girls who stayed close to the troops….

The war in question was the War of the Spanish Succession, which went on from 1701 to 1714 and is considered by some historians the first world war—since it was carried on over most of Western Europe (and maybe also a bit in the New World, where it was called Queen Anne’s War by the English colonists).

This war began when the last Spanish Hapsburg king died without an heir, and left his throne in his will to Philip of Anjou, grandson of France’s Louis XIV. Philip went to Spain and got himself crowned Philip V, but Louis XIV wasn’t content with that.

He sent armies into the Spanish Netherlands to secure it and threatened to have Philip declared king of France as well.

This upset the British, the Dutch (still a sizeable maritime power) and the Hapsburg monarch Leopold I of Austria, then still also head of what was left of the Holy Roman Empire (mainly small states in what is now Germany).

So these three countries (aided by some lesser ones) set up a rival claimant to the Spanish throne. To back up his claims, they went to war with Louis, Philip and some (but not all) of the smaller states in what are now Germany and Italy.

The gruesome fun and games went on, off and on, for years and years—with a lot of blood spilled and much money spent.

The basic problem, it seems, was how to maintain a balance of power that every power could live with. In the end the war was settled in what – in sporting terms – might be called a tie.

Militarily speaking, the tie was established through three treaties, those of Utrecht, Rastatt & Baden.

Louis and Philip got to keep Spain, but Philip had to renounce his claim to the French throne, and France lost a number of territories.

Among them were a few in America, which were ceded to the Brits, but the Brits didn’t get the French altogether out of North America until later in the 18th century, in the Seven Years’ War (1756 to 1763).

This was the war known to the British colonists (and to subsequent citizens of the USA) as the French and Indian War. Is that all clear?

Jean-Antoine Watteau was only 36 when he died, but what a legacy he left!

”Watteau’s Soldiers: Scenes of Military Life in Eighteenth-Century France” will be on view through October 2. It was organized by Aaron Wile, curatorial fellow at the Frick.