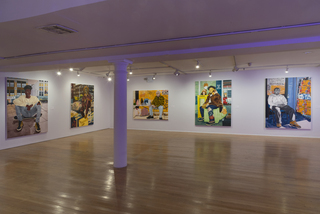 Installation view: Jordan Casteel at the Studio Museum in Harlem. Photo by Adam Reich.
I don’t why, but I seem to visit the Studio Museum in Harlem in summer more often than at any other season. Last year, it was the excellent show of Stanley Whitney that propelled me northwards. This year, it was Nadine Witkin, daughter of the illustrious Isaac Witkin, who reported on Facebook that she had attended the opening of “Richard Hunt: Framed and Extended” there.

If I understood her correctly, she said that Hunt had been a friend of her father’s and that she welcomed seeing his work again.

This was not my first experience of Richard Hunt. A Chicago sculptor born in 1935, he initially attracted my attention back in the later 60s, when I was still writing about art for Time. I did a story on him then, when he was still quite young and just making his mark.

But it was news to me that he and Witkin had been friends, and a great advertisement on his behalf, so I took myself up to West 125th Street and found – as usual –not one but four shows there (all running through October 30).

Before I was through, I’d visited all four, with varying degrees of enthusiasm.

Hunt’s exhibition, I learned, was down in the lower level of the museum. To pass through it, I was first exposed to “Color in Shadow: Expanding the Walls 2016.”

This is the 2016 edition of an exhibition that annually showcases photographs made by those New York area high-school students who are enrolled in the museum’s eight-month residencies exploring the history and techniques of the camera.

It’s always clear that these students have been carefully schooled. It’s also clear that their point of departure is the archive of marvelous vintage photographs by James Van Der Zee (1886-1983).

This archive is owned by the museum, and samples of its treasures are interspersed with the student work in this show. Although as always it has a number of attractive pictures by its younger participants, I think I liked last year’s edition better than I did this year’s. Still, it’s always inspiring to see high-school students getting involved in any form of art.

The Hunt exhibition, which was the next I examined, had been organized by Lauren Hynes & Hallie Ringle. It turns out to be not a full-dress retrospective, but a selective look exploring three lesser-known aspects of Hunt’s art.

Comprised of 17 works executed from the 1960s to the present, these aspects are prints, small to moderately-sized bronzes and small welded steel pieces---all as distinguished from Hunt’s large public commissions, for which he is best known, and which are situated in more than125 parks, schools and other public spaces across the country.

The prints on view here, some of which date back to the 1960s, on the whole tend to share the visual elements of the bronzes: that is to say, their vocabulary runs to flowing, organic shapes, with spiky or flame-like accents.

Some of these prints are very good-looking - full of thrusting, dynamic forms and beautifully colored, though with a subtle, somber palette.

Some of the bronzes are quite large, mostly freestanding, and they range in date from the 1970s right up to 2014. Their floating, biomorphic visual vocabulary suggests an ancestry in surrealism.

By contrast, the welded-steel pieces are smaller and more geometric, with straight lines and rectilinear shapes. There are only five of them, all done around 1989-90, and wall-pieces. Their perky profiles suggest a cubist ancestry, or to be more up to date, a kinship with Witkin and David Smith.

I certainly respected the bronzes, but suspect that I liked them better in the 1960s. In my old age, I was more taken with the welded steel sculptures. Still, it's unwise of me to evaluate an artist's total oeuvre upon the basis of such a small selection--there may well be other works that might make me qualify or alter my preference.

At any rate, my two favorite pieces split the difference. One was “Plateau” (1990), one of the sticky-out small steel wall pieces, but the other was “Framed and Extended” (1996), a sticky-out spikily-formed wall piece made of cast and welded bronze.

Moving on up to the main floor, in the big gallery facing the entrance, I found the museum’s major summer exhibition, “Alma Thomas.”

This is a lovely full-dress retrospective, organized by Lauren Hynes & Ian Berry, with more than 50 paintings and works on paper by the distinguished Washington area abstract painter (1891-1978).

Born in Columbus, Georgia, Thomas moved with her family to Washington as a teenager, graduated from Howard University there in 1924 and received an MA in arts education from Columbia University in 1934.

For most of her adult life, she taught art in Washington’s Shaw Junior High School and was able to paint herself only intermittently. After retiring from Shaw in 1960, and at the age of 69, she at last began to paint full time.

It was also in 1960 that she took an MFA from American University, and, from that period onward, began to be classed with Kenneth Noland & Morris Louis as a member of the Washington Color Field School.

However, she appears to have been closer to and derived more support from Jacob Kainen (1909-2001), the transplanted New Yorker who is sometimes described as the father of that school.

Although Kainen’s paintings are far more modest than those of Noland and Louis, he too was a friend of Clement Greenberg, and Greenberg gave me an introduction to him and his wife Ruth when I went to Washington on a Smithsonian Pre-doctoral Fellowship in 1980-81.

The Kainens fed me well, and showed me their stellar collection of German Expressionist prints, but what I particularly enjoyed was the totally unfazed way that Jacob talked about Greenberg.

Being Greenberg’s exact contemporary, he indulged in neither the sometimes doglike devotion nor the paranoid hostility that seem to afflict almost all of us who were Greenberg’s juniors (me included). It was refreshing – but I digress.

The current Thomas exhibition begins in 1959, with a semi-abstract entitled “Yellow and Blue,” and continues with a couple of more figurative works, both entitled “Sketch for March on Washington” (both c. 1964).

Thomas had participated in the gigantic & historic civil rights march on Washington that took place on August 28, 1963, and a picture by her entitled “March on Washington” was reproduced by the United States Postal Service on a stamp.

Everything else in this show is abstract, and the big surprise for me was the variety in it. The image that I most associate with Thomas is of a rectangular canvas entirely covered with a series of vertical dotted lines in brilliant colors, especially the three primaries—red, yellow and blue.

The show has a number of examples of this or closely related images, and they are handsome, too – the standouts being “Breeze Rustling Through Fall Flowers” (1968, The Phillips Collection), and “Wind, Sunshine and Flowers” (1968, Brooklyn Museum).

However, the rest of the exhibition – nearly three-quarters of it—explores the many other facets of Thomas’s oeuvre. Although the other paintings still often have floral titles, and related imagery, the colors vary widely.

The greatest variety is to be found in the smaller works on paper, principally the brightly-tinted watercolors, often in vitrines.

However, my own favorite is one of the larger paintings, entitled “Starry Night and the Astronauts” (1972).

Although it is one of those composed of vertical dotted lines, most of its area is covered with deep blues and even blacks – all except for a little patch of bright reds, oranges and yellows on the upper right, like a beacon sailing through uncharted skies.

On the upper level, at the back of the Studio Museum, are displayed works by the three younger artists who are the current beneficiaries of the artists-in-residence program that is central to the museum itself and gives it its name.

I inspected the multimedia works, but as I don’t go out of my way to inspect similar work in Chelsea or Bushwick, I’m afraid I have no idea how up-to-date and cutting edge these works really are.

On the other hand, I related to the painter bigtime. Portraiture is a timeless art, and when it’s done well – as it is in this case – how it compares with other portraiture being done matters less.

The six large portraits by Jordan Casteel are in a crisp, abbreviated style that reminded me a bit of Alice Neel, but what a difference in the subjects!

In place of Neel’s upper middle-class, neurasthenic Upper West Siders, Casteel has chosen to depict a robust group of Harlem citizens, especially the different street vendors on 125th Street. This is an inspired choice.

The vendors go to the heart of Harlem, and I’d noticed them while I was walking to the museum from the subway – all lined up along the sidewalk, mostly with their backs to automotive traffic, and so many that there wasn’t much room left over for bus stops and traffic signs.

Each one looked different, and each had a different product to sell, or so it seemed. I suppose there was some repetition, but the vendors in question had had the good sense not to set up shop side by side with their competitors—and the artist had chosen to depict a wide range of them.

All of these portraits are splendid, but my favorites are “Jared,” who is young, and seated on a skate board, “James,” seated high on a stool, with the street and its buildings as a backdrop, and “Glass Man Michael,” with his wares – and graffiti on the wall behind him.

Indeed, throughout the series there is an adroit use of lettering and graffiti, which enhances the lifelikeness of the work.

(I might add that Casteel has already been “discovered” by the Caucasians. Since 2014, when she took her MFA from Yale, she’s had three solo exhibitions, two of them at Sargent’s Daughters, on the oh-so-trendy Lower East Side.)