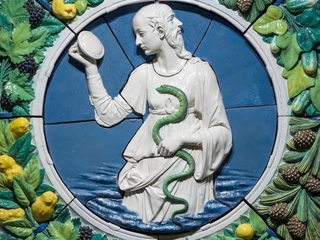 Prudence (in situ), Andrea della Robbia (Italian (Florentine), 1435–1525). Ca. 1475. Glazed terracotta. Lent by the Metropolitan Museum of Art, Purchase, Joseph Pulitzer Bequest, 1921. Courtesy, Museum of Fine Arts, Boston.
Below you will find capsule entries on a selection of exhibitions to be held (mostly by museums, large and small, and mostly but not exclusively in New York) this autumn. It’s not the best season I’ve seen, but it should be of unusual interest to admirers of superannuated female minimalists and overwrought Italianate baroque painters.

Instead of listing these shows alphabetically, or by the order of importance of the museum, I’ve listed exhibitions in chronological order, so the ones already up or due to open in early September are listed first, and so on, and on…

Already on view: “Hubert Robert, 1733-1808,” at the National Gallery of Art in Washington (through October 2). Nicknamed “Robert of the Ruins,” this painter of the rococo period in France was best known in his lifetime for his architectural fantasies.

However, in retrospect he may be seen as the foremost forerunner of the many formidable practitioners of landscape painting who were to emerge in France in the 19th century, from Corot to Cézanne.

Already on view: “Benjamin Franklin: Portraits by Duplessis,” at The Metropolitan Museum of Art (through November 28). This boutique exhibition focuses on an oil and a pastel made by Joseph Siffred Duplessis (1725-1802), official portraitist of Louis XIV.

His subject: U.S. Founding Father Benjamin Franklin, writer, inventor and publisher, after he’d arrived in Paris to seek French support for the American Revolution. The American cause was already vastly popular in France, and not only because of the liberal sentiments of the intelligentsia that had been fostered by the philosophes.

It must also have been because of the two earlier 18th century wars that had pitted the French against the British, and that had cost France virtually all of her North American colonies (see my Watteau review of August 11, below). The French must have been spoiling for revenge.

Already on view: “Della Robbia: Sculpting with Color in Renaissance Florence” at the Museum of Fine Arts, Boston (through December 4). This exhibition of about 50 objects honors the glazed terracotta technique, famed for its shining whites and heavenly blues, that was developed by Luca della Robbia (1399/1400-1482) and shared by him with his nephew and principal collaborator, Andrea della Robbia, as well as various younger members of his family.

Most of the exhibition comes from American collections, but it also includes six important loans from Italy. And, although there are many traditional religious subjects in it, such as the Madonna and Child, it also includes some fascinating glimpses into uniquely Renaissance concerns.

Case in point: "Prudence," a monumental rondel that shows a two-headed figure. One head, facing forward, is that of a young woman, gazing at a mirror in her hand; the other head is an elderly man, looking backward into the past.

These attributes encourage viewers to learn from the past as well as to look into themselves, and the snake held by the figure is a symbol of wisdom.

September 2: “Hans Memling: Portraiture, Piety and a Reunited Altarpiece” at the Morgan Library & Museum (through January 8, 2017). This show will reunite the component panels of Hans Memling’s remarkable Early Netherlandish “Triptych of Jan Crabbe.” This triptych was originally completed around 1470 in Bruges, but dismantled centuries ago, and its parts scattered.

The inner wings eventually came to the Morgan and have long been displayed in founder Pierpont Morgan’s study, but this show will reunite them with the central panel and the outer wings, as well as situating them in a context of other paintings by Memling and his contemporaries, illuminated manuscripts and Early Netherlandish drawings.

September 5: “Richard Pousette-Dart: The Centennial,” at Pace, 32 East 57th Street (through October 14). This exhibition will celebrate the 100th birthday of the distinguished painter who forged an impressive late-cubist style that anticipated abstract expressionism in the early 1940s, but withdrew to upstate New York in the 1950s and only became widely known in the 1960s for distinctive Zen-like meditative abstractions. Opening reception: September 14, 6 to 8 pm.

September 9: “No Limits: Zao Wou-Ki” at the Asia Society (through January 8, 2017). Known in his lifetime as the Chinese painter whose work commanded the highest prices, Zao was born in 1920 in Peking (now Beijing). He began studying art in China but immigrated to France in 1948 (shortly before the Communists took over China).

After making a name for himself in Europe and the U.S. as an abstractionist who combined Eastern and Western traditions, Zao became a French citizen in 1964 and died in Switzerland in 2013. This show is called his first museum retrospective in the U.S.

September 16: “Carmen Herrera: Lines of Sight” at the Whitney Museum of American Art (through January 2, 2017). This veteran abstractionist was born May 31, 1915, in Havana and is still active at 101, busily painting in her Manhattan studio.

She is sometimes billed as a minimalist, and perhaps this exhibition of about 50 works done between 1948 and 1978 will underline the minimalist aspects of her work. To judge from the images on Wikipedia, though, Herrera might be more accurately described as a geometric abstractionist not unlike Leon Polk Smith and those Latin American and Parisian painters who stubbornly kept on painting the sort of angular geometric abstractions favored by the avant-garde in the 1930s well into the more painterly 1950s.

September 16: “Monumental Lhasa: Fortress, Palace, Temple” at the Rubin Museum of Art, 150 West 17th Street (through January 9, 2017). In this show, the Rubin Museum, which is primarily dedicated to the art and culture of the Himalayas, promises to enable visitors to “vicariously visit and experience” the main architectural sites of the holy city in Tibet.

The show will encompass paintings, photographs, drawings and film that show how Lhasa’s most iconic monuments were seen by Tibetans and Westerners prior to the mid-20th century.