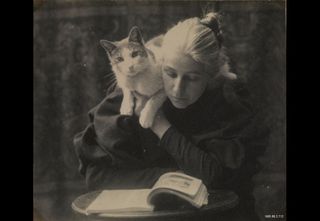 Thomas Eakins, Amelia Van Buren Sitting With Cat on Shoulder, 1891. Platinum print, 3 1/2 x 4 inches (8.89 x 10.16 cm), Pennsylvania Academy of the Fine Arts, 1985.68.2.712.
Herewith my third and last installment of coming attractions for this fall. Like the others, it runs a gamut-- ranging from shows of modernists like Walter Darby Bannard to those of postmodernists like Pipilotti Rist to the "homemade architecture" of Beverly Buchanan to historical figures like sexy Guido Cagnacci of the baroque and Mexican modernism in its glory days of revolution.

October 13: “Walter Darby Bannard: Recent Works” at Berry Campbell (through November 12). I can’t remember having seen recent work by Bannard exhibited in New York for decades—though I did see paintings from the 1990s when I visited Miami in 1999 (Bannard was having a show at the Lowe Art Gallery of the University of Miami, where he teaches). The 90s works (not surprisingly) looked different from the artist’s earlier work.

More recent work by Bannard is featured in “Painting after Postmodernism: Belgium – USA,” a show curated by veteran art historian & critic Barbara Rose for Roberto Polo in Brussels. On through November 13, it includes 256 works of art by 16 artists, 8 of them Americans and 8, Belgians (Larry Poons is another one of the Americans).

In connection with his New York show, Bannard is expected to offer a Q & A session; it’s tentatively scheduled for October 15.

October 19: “Thomas Eakins: Photographer” at the Pennsylvania Academy of the Fine Arts (through January 29, 2017). When I attended the College Art Association’s 2014 meeting in New York, I heard a fascinating talk on how even Eakins’ early genre scenes (from the 1870s) were based on his own photography – though photography was still a radically new art form, and though Eakins still managed to imbue these paintings with his own unique and painterly style.

This show, with over 60 photographs, sculpture and paintings may conceivably make that talk come to life, though it seems unlikely: the advance images available to the press are much more centered around Eakins' private life and later years. During this period, he was training his camera upon many nudes (female and male), members of his family and studio portraits of friends.

One of his most talented students. Amelia Van Buren, is posed with a pert little kitty-cat. If you want to see all the nudes, you'll have to go to the show. Myself, I have a thing for kitty-cats.

Offered in honor of the centenary of Eakins’ death, this show is based upon a collection of over 600 of Eakins’ photographic prints and negatives that the PAFA acquired from one of Eakins’ students in 1985.

October 21: “Beverly Buchanan—Ruins and Rituals” at the Brooklyn Museum (through March 5, 2017). Buchanan, who was born in 1940 and died last year at the age of 74, was an African American artist.

She first got to see the “homemade architecture” of farmers’ homes when she was taken by her father, who was Dean of the School of Agriculture at South Carolina State College, on his visits to farmers across the state.

After earning academic degrees in medicine, and working as a health educator in New Jersey, Buchanan became interested in art. This show will chronicle her evolution in art from abstract paintings through site-specific work and finally, to “shack works:” small sculptures of vernacular dwellings in the rural South.

October 25: “Paint the Revolution: Mexican Modernism 1910-1950” at the Philadelphia Museum of Art (through February 16, 2017, in Philadelphia; thereafter at the Museo del Palacio de Bellas Artes in Mexico City).

This looks to be a mammoth exhibition, chronicling five memorable decades of dynamic change and experimentation through portable murals, paintings, prints, photographs, books and broadsheets. And the co-organizers of this show – at not only the Philadelphia Museum but also the Museo del Palacio de Bellas Artes – obviously have big ideas about how to revolutionize our perceptions of this period.

All the attention, they seem to complain, has been paid to the stars of the period: Diego Rivera, José Clemente Orozco, David Alfaro Siqueiros, Frida Kahlo & Rufino Tamayo. This time around, they promise, they will pay more attention to the “broader panorama” of the period and the “historical context.” I only hope that the heavy weight of all this historicizing doesn’t sink the quality of the work on view.

October 25: “Cagnacci’s Repentant Magdalene: An Italian Baroque Masterpiece from the Norton Simon Museum” at The Frick Collection (through January 22, 2017). This is another one of those teeny-tiny shows – in this case, a single visiting painting by Guido Cagnacci (1601-1663).

An Italian baroque painter with his full complement of swirling figures and chiaroscuro, Cagnacci was influenced less by Caravaggio than I at first thought, and more by the Carracci, Guercino & Guido Reni.

However, if you’re counting your pennies, or live downtown, I would recommend holding off on your visit to the Frick until February 23, 2017, when that museum unveils what sounds like a really smashing show, “Turner’s Modern and Ancient Ports: Passages Through Time.”

This major exhibition of Britain’s finest sea painter will bring together some 35 of his early 19th century oils, watercolors and drawings depicting coastal cities or imagined views of classical ports.

October 26: “Pipilotti Rist: Pixel Forest” at the New Museum (through January 15, 2017). I am not much on video art and still less on installations of it, but since the New Museum is devoting three full floors of its exhibition space to this show, I am at least prepared to record its existence.

The show will document thirty years in the career of Pipilotti Rist, an internationally famous video & installation artist who was born in Switzerland in 1962, and still lives and works there.

According to the New Museum’s announcement, “Her mesmerizing works envelop viewers in sensual, vibrantly-colored, kaleidoscopic projections that fuse the natural world with the technological sublime.” I can’t think of anything to add.

November 4: “Pierre Chareau: Modern Architecture and Design” at the Jewish Museum (through March 26, 2017). This exhibition will deal with Pierre Chareau (1883-1950), the French modernist architect, designer and art collector.

He is best known in the U.S. for his Robert Motherwell House in East Hampton, Long Island, built shortly after World War II (Chareau had fled the Nazis and was living in exile in the U.S.)

In France, however, he is remembered more for his “Maison de Verre” (Glass House), a shining example of early International Style created in 1928 in Paris in collaboration with Dutch architect Bernard Bijvoet and the metal worker Louis Dalbet. Work from Chareau’s art collection will be part of the exhibition, too.

November 4: “World War I and American Art” at the Pennsylvania Academy of the Fine Arts (through April 9, 2017 at PAFA; later at the New York Historical Society in Manhattan). This massive undertaking, with 160 works by some 80 artists, looks to be an event equally welcome to a broad range of tastes.

It will range from avant-gardists like Marsden Hartley (presumably to be represented by one or more of his “German officer” abstractions) to academic war horses like John Singer Sargent (scheduled to be represented by a 20-foot-wide battlefield vista illustrating the aftermath of a mustard gas attack).

Just how seriously this show takes itself may be gleaned from the 8 thematic sections around which it is organized: 1) Prelude: The Threat of War; 2) Hartley and Hassam: Tenuous Neutrality; 3) Debating the War; 4) Mobilization; 5) Modernists and the War; 6) Battlefields; 7) The Wounded and the Healers; and 8) Celebration and Mourning.

November 21: “Francis Picabia: Our Heads Are Round so Our Thoughts Can Change Direction” at the Museum of Modern Art (through March 19, 2017). This 200-item show claims to be the first in the U.S. to encompass the full range of the witty & provocative career of Francis Picabia (1879-1953).

Though Picabia is best known for his contributions to dada in the 20th century’s teens and early 20s, his style over the years ranged from impressionism to abstraction to dada geste to pseudo-classicism to photo-based realism and even l’art informel. His forms of expression included painting, performance, poetry, publishing and film.

My suspicion is that this exhibition will show that Picabia was at his best in his dada period, just like we always thought. I could be wrong, but it’s a fact that the show itself is timed to coincide with the centenary celebrations of the “founding” of dada itself at the Cabaret Voltaire in Zurich—or at any rate, of its naming there. But New York Dada had already crested in 1915, and Big Dada Marcel Duchamp had been making his “Ready-mades” for a couple of years before that