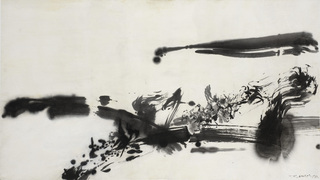 As a native of China making painterly abstractions in Paris from the 1950s onward, he was ideally placed to appeal to the first senior editor I had when in 1967 I began to write the Art page on Time, Cranston Jones (1918-1991). Cran knew a lot about abstraction. He knew about color-field painting before I did, but that’s not what concerns me here.

In the late 1950s, while I was still laboring as a peon elsewhere on Time, Cran was the new writer in Art, trying to live down the philistine reputation that the magazine had acquired in the art world in the early 50s thanks to his predecessor, Alexander Eliot, best known for having coined the epithet “Jack the Dripper.”

Cran wanted to do favorable stories on abstract artists, but even in the later ‘50s, Alfred Barr¸ presiding genius at MoMA, remained convinced that the leadership of the art world was still coming from Paris. Many others thought so, too.

Under these circumstances, it would have been only too natural for young Cranston to want to write about Zao, who by 1958 had even visited New York and was exhibiting there with Sam Kootz, one of the legendary early dealers in abstract expressionism.

Not only was Zao abstract, but he had been born in 1920 to a wealthy family in China and received his early art education there, before clearing out in 1948, just before the Communists took over the entire country.

And, as all of us on Time knew, our magazine’s founder, Henry Robinson Luce, had also been born in China, and remained interested in it and close to the Nationalist Chinese government that the Communists had forced into exile in Taiwan.

It was also no secret that although Luce allowed his publications to cover abstract art in their own ways, he himself was more conservative in his artistic tastes. So what could have been more natural than that Cranston Jones should have done a story for Time on a Chinese abstractionist??

It would have been his way of trying to encourage Luce to like abstract painting better, while enhancing the magazine’s reputation as avant-garde within the art world.

I could have sworn that I'd seen a story he must have written somewhere, but so far I have been unable to track it down. (Belatedly, I must add that according to Bill Hooper, the official Time Inc. archivist, Cran never did manage to get a full-length review of Zao into the book.

(However, I think he must have encouraged Marguerite Johnson, a researcher who contributed a column of brief art reviews to Time in the 60s (and later went on to become a writer like me), for one of her capsules in 1964, when Zao was showing at Kootz, called him a "Chinese expatriate in Paris" who "makes a meeting place for yin and yang, feeds planes of pastoral stillness into moils of inner frenzy."

Anyway, it was with thoughts of Cranston and Luce all rattling around at the back of my head that I went to see Zao’s show at the Asia Society Museum. With 49 works in oil, ink, print and watercolor, it occupies the entire second floor of the museum, and spans the artist’s output pretty much since he left China and to the end of his career.

It is loosely divided into three sections, comprising the artist’s early, middle and late periods, and it’s uphill all the way.

The earliest work, mostly done in Paris up until the early 1950s, is distinctly amateurish, the artist on a learning jag.

It has quotations from a slew of artists, ranging from Rembrandt and Cézanne to Klee and Matisse as well as assorted Chinese sources.

It’s called “To Learn is To Create” and the curators, Melissa Walt, Ankeney Weitz & Michelle Yun, deserve credit for including it. On esthetic grounds, they could easily have left it out, but I think it’s always worthwhile to show how even the most godlike artists had to start at the foot of Mount Olympus.

The press release would like you to believe that this is Part Two of the show, but the chronology doesn’t justify this. Fortunately, it’s hung in a gallery off to the left of the elevators whereas Parts Two and Three are hung to the right, and flow seamlessly from one into the other.

The middle period work, from the mid-50s to mid-60s, constitutes the period when the artist had become proficient, and was becoming well known both in Europe and America (he became a French citizen in 1964).

This section is called “Calligraphy Is the Starting Point” and is presumably meant to show how Zao combined – or, if you prefer, fused – Asian and European approaches to create a genuinely international style.

I’m sure the man deserves credit for studying the culture he came from, and doing his best to meld it into European-style abstraction. But somehow he did it so thoroughly that his canvases wind up looking more European than Asian to me.

Put another way, this is the part of the show that somehow seemed most familiar.

The smaller and tidier paintings – although they may and probably do display greater kinship with Chinese calligraphy -- are inclined to look dinky and fussy to me.

I get mixed up on the many categories into which French art critics sort French abstract painting from the ‘50s. Is Zao’s painting l’art informel or abstraction lyrique or tachisme? Maybe it’s a little of all three??

The only thing I can be sure of is that it’s not “matter painting,” as it has only the most modest build-ups of paint and encrustations.

The third part of the show, comprised of works from 1965 on through to 2007 – is called “A Place to Wander”, and it’s the best part of the entire show.

Indeed, much of it is terrific, the last space in particular with six big paintings that are worth the price of admission by themselves.

Most of them are colored—in some cases, brilliantly so. For example, “27.02.98” (done, surprise, surprise! in 1998), combines black with fiery reds on a good-sized canvas measuring about 4’ x 6.’ It has a flame-like bush shape in the center and a nightmarish feeling of Goya’s satanic worlds.

More restrained but still sizeable (and correspondingly relaxed) is “15.04.77” (1977), a vertical about 6’ x 5’. Here a predominantly paler composition on a cream-colored field offers a black narrow horizon line two-thirds of the way up the canvas.

It has pale, greyish-brown modest splats at the center left, like the prow of a boat cleaving the waters. The overall feeling – though not insisted upon – could be of a misty, serene lake.

A third picture in this group – and the only one in it that the Asia Society has been able to get photo clearance for – is “Sans Titre” (1972). As it’s only India ink on paper, it’s black and white (all the paintings in this group are in private collections, mostly in Taiwan, and their owners appear to have been more than ordinarily reclusive).

But from our reproduction, perhaps you can see how this handsome 2’ x 4’ panorama combines a large, smeary splat-like oval on the lower right with smaller dancing shapes and complementary horizontals. It looks more Chinese than any of the other, more brightly-colored paintings in this group.

This may explain why the Asia Society was so eager to reproduce it, but hey, I won’t hold its chinoiserie against it. The scale alone of its large, bold, simple shapes gives it a freedom that liberates it from either an Eastern or a Western context.

Good as “Sans Titre” is, however, it doesn’t begin to compare with the biggest and most extraordinary painting in the show. This is a huge four-panel vista measuring in its entirety about 5’ x 13’, covered with a cloud-like field and decorated with big, arched red and blue forms.

As all these dates indicate, these remarkable paintings were created long after second-generation abstract expressionism had supposedly become only a “historic” style. But Zao’s admirers don’t seem to have been overly bothered by this supposed anachronism. To judge from the auction market, they just kept on buying and buying.

Zao died in April 2013, aged 92, in Switzerland, of complications of Alzheimer’s. According to his obituary in the New York Times by Paul Vitello, he had been “one of the most commercially successful living artists in either hemisphere” (elsewhere, he had often been described as “the best-selling Chinese artist”).

In the years just before his death, his paintings were already going at auction for between $1 and $2 million, according to Vitello. But nine months after his death, in December 2013, a Zao being deaccessioned by the Art Institute of Chicago went for $14.7 million at Sotheby’s in Beijing. As (alas) with artists in general, nothing in his life became him so well as leaving it.