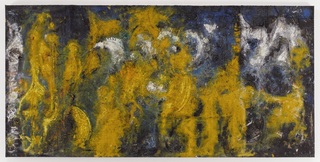 Richard Pousette-Dart, Yellow Amorphous, 1950. Oil on canvas 45-1/2" x 92" (115.6 cm x 233.7 cm). Photograph by Kerry Ryan McFate, Courtesy of Pace Gallery. © 2016 Estate of Richard Pousette–Dart / Artists Rights Society (ARS), New York.
Well, I thought I knew all about Richard Pousette-Dart (1916-1992). But it turns out that the only parts of his career that had stuck in my mind were its beginnings (in the early 1940s) and its long-lived end (onward from the 1960s). Thus “Richard Pousette-Dart: The Centennial” at Pace (its 57th Street space) came as a welcome surprise to me for its inclusion of several stimulating & unfamiliar paintings from the 1950s (through October 15).

And Pousette-Dart was right there, right along, making paintings that have since attracted attention. The only question seems to be, why didn’t everybody ooh and ah at them when they first went up on gallery walls?

In some ways, he could even be classed as a member of the first generation. He was, after all, only one year younger than Motherwell, and only four years younger than Pollock (the current show at Pace honors the centenary of his birth).

Pousette-Dart was included in at least one group show at Peggy Guggenheim’s exclusive Art of This Century gallery in the 40s. After World War II ended, and Peggy went back to Europe, Pousette-Dart went on to show from the 50s through to the 80s with Betty Parsons, another prestigious dealer associated with the nascence of abstract expressionism.

Yet somehow he failed to attract the attention of Critics Who Mattered. Clement Greenberg made several mildly favorable but offhand remarks about his work in the 40s, but he failed to make the canon established by that critic in “’American-Type’ Painting” (1955).

Irving Sandler, who was already writing criticism in the 50s, could have picked up the slack, but he too included only a couple of passing references to Pousette-Dart in “The Triumph of American Painting” (1970). Dore Ashton¸ another veteran of the 60s, had nothing at all to say about this painter in “The New York School: A Cultural Reckoning” (1973).

To the best of my knowledge, that was pretty much the state of Pousette-Dart scholarship when I entered graduate school, in 1974. But I’d already been exposed to his later work -- from the 1960s -- while writing about art for Time in the later 60s. I don’t recall writing about him, but I was attracted to his pale, shimmering fields of little dots of transcendent color.

It was a sophisticated form of all-overness that I could easily relate to – even at a moment when Pollock’s all-overness was still leaving me cold. And my respect for Pousette-Dart was heightened by the fact that a rather inartistic man I knew was also turned on to abstraction in general upon the basis of this artist’s dots.

While I was in graduate school, and in the decade or two afterwards, I was aware that Pousette-Dart was receiving more scholarly attention. But it was his cryptic, semi-cubist, semi-surrealist work from the early 1940s that was featured in “Abstract Expressionism: The Formative Years,” a show organized by Robert Carleton Hobbs & Gail Levin that played the Whitney in 1978.

This same early work was also highlighted by Stephen Polcari in his tome, “Abstract Expressionism and the Modern Experience” (1991). Though Polcari did reproduce five paintings by the artist, one was from the 1970s and two were from the 1940s.

Only one was from the 1950s, and because Polcari was looking for symbols to illustrate his thesis that ab-ex was a form of “secular religiosity,” he chose one of the most representational (and retardataire) paintings from the 50s that he could find.

Since those days, I’ve seen two Pousette-Dart “retrospectives,” one at the Metropolitan Museum of Art in 1997-98 and one at the Guggenheim in 2007. And I have to confess that in both cases, my enthusiasm was muted.

At the Met, I argued that to the extent Pousette-Dart achieved a mature style, it was only in the 1950s, making him a member of the second generation rather than the first.

At the Guggenheim, I argued that he didn’t even achieve a mature and entirely personal style until the 1960s, making him no sort of an abstract expressionist at all.

I can think of two reasons why I am so much more enthusiastic about the current exhibition.

One is the sad state of contemporary abstraction in New York in the 21st century. By comparison with MoMA’s big “Forever Now” show of a couple of seasons back, and “zombie abstraction” of about the same vintage, to say nothing of Keltie Ferris, Jackie Saccoccio and other more recent “celebrity” abstractionists, Pousette-Dart looks like a genius.

The other reason is that Pace’s selections from the 1950s for this show include a goodish number of what may at first seem atypical works – possibly paintings that have languished in the storage racks of the estate (which Pace represents) and not been exhibited to any meaningful extent before now.

Looking at the more familiar works from the 50s on view, I speculate that perhaps they weren’t as wild and woolly as other abstract expressionist paintings on view in the 50s (by practitioners of both first and second generations).

Upheavals were taking place in that decade, creating an environment that was very different from the 1940s.

Maybe these more familiar 50s paintings by Pousette-Dart were a little too sedate and dignified for the crusading critics of that era? With their calm rectilinear composition and pale colors, enlivened only by careful diagonals and symbolic curlicues, these paintings had obviously evolved from the artist’s work of the 1940s, but not evolved all that far.

By comparison, this show has a number of paintings that yank the artist out of his stately cubo-surrealist orbit of the 40s and situate him far more certainly in the tempestuous ensuing decade..

One is “Ossi #2” (1958), a vertical with a large, nicely sloppy motif in white on a creamy grey-brown field – or perhaps the field is white and the grey-brown area is the image??

What is so mystifying about this painting is precisely this spatial ambiguity—to which may be the added the fact that although the painting – to judge from its title –reminded the artist (or somebody) of white bones, it can also be read as flowers or marching figures—in other words, ambiguous in a second sense, truly multireferential.

Another pleasant surprise is “Presence” (1956), a vertical with a two large and nicely blobby white cruciform shapes on a brownish field that could also be old-fashioned country telephone poles or just two human beings??? In addition to being multireferential in these ways, it is also just more of a big, dominating abstract design.

Most impressive of all (though it may conceivably extend a little too far to the right) is “Yellow Amorphous” (1950).

This massive horizontal, measuring about 4’ high and 8’ wide, has frankly frenetic, mostly mustard yellow shapes further enlivened by touches of white and marching across a light black field.

Is it a Mexican procession (with the leader on the right)? A group of children (it has a playful feeling)? A scribble meant to depict the Parthenon frieze (except that – thankfully--it’s much more disorganized)?

Whatever you may want to call these three paintings, and however you want to describe them, they situate their creator far more persuasively in the turbulent 50s and justify his claim to be called an outstanding member – if not of the first, certainly of the second abstract expressionist generation.

Another attractive show in town is “Irene Monat Stern” at the new gallery space in Chelsea for Hollis Taggart (through October 6). Stern (1932-2010) was born in Poland, but survived the Holocaust and came to Paris in 1948, then on to New York in 1954. Here she studied art in various programs, and acquired a husband who was a sculptor. The couple moved on to Southern California in 1965, but obviously not before Monat Stern had seen and been deeply impressed by the “veils” and “florals”” of Morris Louis.The show at Hollis Taggart of seven paintings, virtually all done in the later 1960s or early 1970s, utilizes Louis’s technique of pouring and manipulating acrylic on unprimed canvas to depict large, handsome flowing shapes.

Virtually all of these shapes resemble flowers, with a stem or stems rising up in the center of each canvas, and petals above and around—inescapably summoning up memories of the flower paintings of Georgia O’Keeffe. While the colors are lovely, one wishes that somebody had been around to suggest upending Monat Stern’s canvases or cropping them or anyway doing something to create less familiar images.