OFF THE BEATEN (CHELSEA) PATH 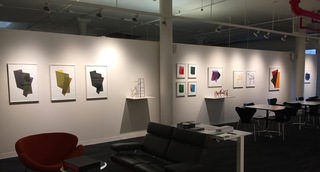 Willard Boeopple exhibition at FXFowle Architects (photo courtesy the artist)
If you don’t insist on obsessing about the newest fads in Chelsea, two recent and two current shows elsewhere in Manhattan are more worthy of your attention. They are (or were) "Currently on View," at Leslie Feely on East 68th Street (closed February 21); “Kenneth Noland: Into the Cool,” at Pace (& Pace Prints) on East 57th Street (through March 4); “Eric Giraud: Le Rêve Aux Couleur Resilientes” at Wilmer Jennings on East Second Street (closed February 25), and “Willard Boepple Prints: 2 + 3D” at FXFowle Architects on West 19th Street (through March 31).

I’m really sorry I didn’t get to tell my readers about this Feely show earlier, but at least it should serve as a good advt. for this same gallery’s display at the upcoming Armory Show. Its emailed announcement for the Armory Show reproduces a winsome 1969 Frankenthaler. Among other artists with work to be found at Booth #420 on Pier 92 are Dzubas, Olitski, Noland, Motherwell, Hofmann, Matisse & Caro.

As to the show “Currently on View,” it was rather mixed with works on paper by Brice Marden & Richard Diebenkorn for those who want such art. As I don’t, I was more impressed by the vintage Dzubas, "Arapaho” (1975); the witty little Caro, “High Window” (1978), made of cast and welded bronze, and the muscular untitled Poons from 1976, with rivers of blue, maroon, white, pink, yellow and mint acrylic coursing down the canvas.

Most of all, I was dazzled by the three nearly perfect paintings by Olitski, one from each of his most memorable periods. “Absent Relative” (1968), is a long horizontal classic spray, predominantly purplish pink but with framing elements of red, brown, yellow and green.

“Skekinah Flame”(1990) is heavily impastoed with great golden-brown loops of paint, and is powerful in its way, too, but the most magical of the three is “Cythera – 2,” (1977). This has a nearly flat, but very subtly textured surface, with a combo of blue/grey/green on the top and an undercoating of pink that somehow glows through. Pure witchcraft!

“KENNETH NOLAND: INTO THE COOL”

Well, I suppose that most of the many young, good-looking and well-dressed men and women who turned out for the opening of this show don’t know what kinds of work made Kenneth Noland (1924-2010) famous, back in the ‘50s and the ‘60s.

Nor would they have gotten a clue from the paintings displayed in this show, a sequence of 14 medium-sized acrylics on canvas (by my count, though the press release says there were 15 on view and 18 in the total cycle).

All were made in 2006 and 2007, when the artist was in his early 80s and suffering from macular degeneration – not that age or failing eyesight must of necessity lead to substandard painting, but they certainly appear to have contributed in this case.

The motif throughout is a large circle, superimposed upon a watery field of pretty pale fluttering short sweeps of paint, slightly built up by modest injections of gel.

Sometimes the circles are delineated by single pencil lines; sometimes they are built up with a white material (paint? gel?).

Sometimes they are echoed by smaller concentric circles within them, increasing their resemblance to the wonderful “targets” that initially brought Noland into the limelight back when, but totally lacking the savage beauty that distinguished the early work.
‘
There is a big gap between pretty and beautiful.

To the extent that any of these pictures can be called successes, it depends on how well the superimposed circles are done. For the most part, those circles are either too faint or too heavy. I am not happy to have to say so, but in my opinion such circles look clumsy, almost amateurish (though this is not apparent online or in reproduction).

One seasoned observer with whom I spoke wondered why this show was ever put on. Another person I spoke to was a younger man. I asked him how he liked it, and he indicated that the only works that had interested him were two prints in Pace Prints (up the tortuous circular staircase from Pace itself).

I went up to Pace Prints (by the elevator) and agreed with that young man. The best things about this two-part show are the two handmade paper monotypes with oil paint added. They employ another image for which Noland was celebrated, the chevron, and are titled, “Days and Nights 7” and “Days and Nights 9.’ Both were done in 1983.

Even they are unlike Noland’s earlier work in being painterly rather than knock-em-dead post-painterly, but at least they have some of the sparkle and vitality that distinguished this great painter in his prime.

In the East Village, we had a lovely exhibition by Eric Girault, a self-taught artist who was born in 1937 in Haiti but has resided in New York City since 1976.

The title of the show emphasized the fact that most of the 50 pictures in it dealt with the artist’s native country, and that his dreams of that country are more long-lived than the colors he uses to depict them with—which, since he uses brightly-colored traditional oils and watercolors, suggest they may be long-lived indeed.

When you hear “self-taught Haitian artist” you are likely to summon up images of primitive work like that of Grandma Moses, but Girault’s self-education evidently included looking at a lot of art books and going to a lot of museums, for his work is a lot more sophisticated than that of Granny M.

Although the press release accompanying the exhibition declined to categorize his style, I note that on the web he is most often described as “an impressionist,” I myself would be more inclined to call him a post-impressionist.

His subject matter (genre, figure studies, still lifes, cityscapes and portraits) delineates well-loved places he has lived, and dear people he has known, but his style reflects an almost equally keen familiarity with French art.

This is true not only with an impressionist like Degas (as in “La Repasseuse” (2005), a depiction of a woman ironing), but even more with three post-impressionist masters: Cézanne, Van Gogh & Seurat. Nor does Girault’s familiarity with these masters detract from the freshness of his vision. On the contrary, it sometimes looks like he was playing impish games with these big names.

His titles may give one pause, being composed as they are of a mix of classical French, Haitian Creole (a variant of classical French), and what Debra Vanderburg Spencer, the show’s curator, calls “artistic license.” But their meaning was clear enough to me..

One painting was called “La Poussians d’Amélie” (2009) and showed a little girl of eight or nine, wearing only a pair of white cotton underpants and playing with baby chicks (poussins). One of them was cheerily perched on a platter on her head. The anatomy of the child’s torso, legs and arms was no more and no less “primitive” than that of Cézanne. Indeed, it was curiously reminiscent of his paintings of bathers, especially The Bather” at MoMA (ca 1885), who is clad only in a very similar kind of underpants.

Another picture that gave me this feeling of déjà-vu all over again was the one entitled “Reviel Martinel” (2000). This title suggested “Waking – Morning,” and the picture portrayed a chair with a rooster under it (cocks crow at daybreak) and a coffee pot and creamer on the seat of the chair (one drinks coffee at breakfast).

However, the chair itself, with its woven seat and wooden frame, looked like nothing so much to me as “Van Gogh’s Chair,” that simple and often-reproduced image created by the troubled Dutch painter in 1888, and owned by the National Gallery in London.

But enough of these learned art-historical references! The master from whom Girault has borrowed most – and taken the most liberties with – is Seurat, whose pointillist dots have been altered by the Haitian artist into a series of patches of color.

And with these patches, he created some of the most entertaining pictures in the show. Among them was a large one commanding the entrance, “Marché Moron” (1988), a colorful crowd scene in the Haitian town of Moron, with throngs of people bringing their animals to market.

Two more large paintings employing this modified pointillism dealt with boats in the harbor (and reminded me that as Haiti is on an island, we are never far from the sea). The one I liked best was “Sunday Relaxation” (1990), with all the sailors above board, playing cards or finding other ways to enjoy their day of rest.

Even more dramatic was a very large (50” x 60’) aerial view of “La Citadelle Laferrière” (2012). This massive fortification, built on a mountain-top in the wake of Haiti’s war of independence from France in the early 19th century, remains a moving symbol of Haitian independence even today.

But I also fell for two more modest studies of buildings, both in New York, the humorous “125th Street Before Gentrification” (2007) and the severely pure “13th Street Rooftop” (1981). Finally, I was touched by the portrait of a small girl, “Young Paysane” (1983).

Occasionally, over the years, I have reviewed exhibitions held in the offices of friends of the artist, and usually the work on view has to contend with being placed over desks or copy machines or whatever. The situation in this case of Willard Boepple's prints and mini-sculptures is much more salubrious.

Although FXFowle Architects, on the 11th Floor of 22 West 19th Street, is an office, the area right at the entrance that is set aside for the display of art is much more like a traditional art gallery.

The working areas, with their desks and office equipment, are discreetly hidden behind two floor-through partitions on or against which Boepple’s art is displayed (the prints on the walls, the sculptures on little shelves jutting out from the walls). Only the presence of a few noncommittal tables and chairs suggest that this area is also sometimes used as a reception or conference area.

And Boepple’s work is gorgeous—not only the four exquisite little sculptures, made from sintered nylon and painted red, grey or yellow, but in addition the 23 silkscreen prints, all but two of them monoprints (plus one etching).

The sculptures—entitled “Inside Out,” “Colt,” “Preston” and “Lock” (all 2016) – are typically composed of dynamic little sticks of color, and in this respect very similar to the artist’s larger work (“Lock” was my favorite).

The prints (dated from 2008 to 2016) are simpler--clean, neat, and pure as all get-out: distinguished by masterful handling of what one suspects were originally only a few simple forms..

The central image in most of the prints usually looks like it was originally just one or two sheets of monochromatic or bi-chromatic, semi-transparent paper or celluloid or plastic—rectangular, triangular, curved or otherwise shaped.

As always, Boepple works with a team of associates, and indeed, as he explained in a brief speech at the opening reception, this was pretty much how the show was created—by ceaseless experiment, trial and error. But there are few if indeed any errors here.

The only thing lacking to make this a more perfect experience would be titles that conveyed the music in these eloquent prints. But – although the two representatives from the editions are titled “Trumpet” and “Big Red” -- the monoprints have only a date and a letter to identify each, e.g. “10.3.10 I.”

This makes it very difficult for me to single out any for particular praise or even description, so instead of reproducing a single work, I am offering (courtesy of the artist) an installation shot -- and illustrating the range of which this artist’s fertile mind is capable.