ON THE BEATEN (CHELSEA) PATH: THE GOOD, THE BAD & THE BEAUTFUL 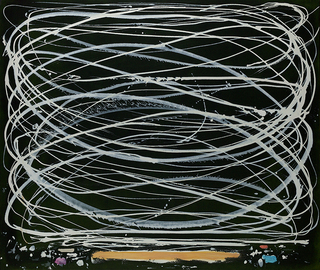 THE GOOD: KASMIN & THE PAINTING CENTER

The show at Kasmin that I stopped in on was “Naturalia” (closed March 4). As curated by Danny Moynihan, better known as a satirical novelist, this was a collection of artworks from the Renaissance to the present dealing with fauna and flora—from rhinoceroses to storks, dead flies and other animals & plants.

Lots of famous names here, from Albrecht Dürer clear through to Damien Hirst and beyond, but with an emphasis on the ultra-realistic, whether by 17th century Dutch masters, 19th century French Salon painters or early & late (mostly academic) surrealists from the period entre deux guerres and since.

Indeed, to judge from his emailed schedule of coming attractions, Kasmin appears to have become fascinated by early and late surrealists (though he has also recently become the representative for the estate of Lee Krasner). But what I liked most about “Naturalia” was the high degree of professionalism evinced throughout most if not all of the exhibits in it.

The whole show might not have been all that daring (since everybody likes animal pictures and realism anyway) but it was just so exceedingly well-done that I had to admire its finesse and politesse. And, I would add, when I was there, it was also being very well attended.

The show at The Painting Center was entitled “Big Idea” (closed February 25). It was curated by Sue Collier, Leslie Ford, Jack McWhorter, & Jo Ann Rothschild, whom I believe are all members of this non-profit, artist-run gallery. The checklist included 58 works of art by 15 artists (typically 3 or 4 works per artist). Nearly everything was small or even very small – ranging from 6 inches square to maybe 20 x 30 (though there was one artist offered work as large as 40 x 30).

The term “painting” was applied very elastically in this show—there were lots of objects that although reasonably flat and hung on the wall were made of foam, fabric and that old favorite, ”mixed media.” I would like to be able to be enthusiastic about them, but alas, I couldn’t help thinking that this show made it almost pathetically obvious why these artists were exhibiting in a co-op, as opposed to a commercial gallery.

God knows commercial galleries have a lot of negatives about them, too, but the well-run ones usually have a certain aplomb, a certain self-assurance about their exhibits that I didn’t find in most of the work in this show.

There were, however, three artists whose work impressed me as more admirable than the others, even professional-looking. All three were painters as opposed to object-makers, two abstractionists and one representational painter. The representational painter was Melanie Kozol, and I especially liked her little watercolor seascape, “Eshaness” (2015).

One of the abstractionists was Andrea Ferrigno, whose brightly-colored geometric designs could be overactive but weren’t always. The example of her work that stood out for me was “Cycle System (2016), an acrylic on canvas.

The other abstractionist was Marilyn Kirsch, whose paintings are often overly muted and can create the impression of timidity. However, in the case of “Page #19” (2012), this was not a problem. Its nearly monochromatic, textured surface in fact reminded me a little bit of some ’70s work by Jules Olitski.

THE (TERRIFICALLY POPULAR) BAD AT GAGOSIAN

Lord knows, art critics are remembered (if they are remembered at all) for the artists they praised, not the ones they damned. And I don’t especially like panning any artists, since I know how hard they work and how sincerely they believe in what they are doing. But every so often, the public clusters around an artist whose work strikes me as really bad, and I feel obligated to report on this phenomenon as a symptom of what’s wrong with public taste.

That is the case with Katharina Grosse (b. 1961), a German artist currently drawing reverent, happy crowds to Gagosian (through March 11). In this show, she displays huge (maybe 15 feet high) canvases and a piece of sculpture covered with garishly colored paint combinations (dirty orange combined with oily green and metallic blue, for example). These works were supposedly made by the artist spraying acrylic paint on canvas or cast steel with an industrial sprayer.

Big deal! Jules Olitski started spray painting in 1965, when Grosse was only four years old. And he too used industrial-type spraying tools. Beginning only a few years later, Dan Christensen too used industrial-strength sprays—maybe not as brilliantly as Olitski, but head and shoulders above Grosse – most importantly, because these two painters had a far, far better sense of color and knew how to combine colors that harmonized instead of clashing.

Nor are these the only painters who have used sprays before Grosse—even an artist as uninspired as Norman Bluhm was spraying fit to kill in the 1950s, before Grosse was ever born.

When I saw her show, I was vividly reminded of a passage in “The Unpleasantness at the Bellona Club,” a mystery story by Dorothy L. Sayers originally published in 1928. In this book, her sleuth, Lord Peter Wimsey, describes the oil paintings of a young woman who may (or may not) be a murder suspect.

“These,” he says, “are the paintings of a completely untalented person, who is, moreover, trying to copy the mannerisms of a very advanced school.”

Why is Grosse so popular? Well, for one thing in the “happening” (i.e. dada-descended) segment of today’s art world, bad is good, so the uglier the color combinations, the more likeable they appear.

As in so much else, Duchamp set the style here - think of the mud colors in “Nude Descending a Staircase” or “The Large Glass.”

For another thing, if you read the scrapbook of Gross’s clippings at the gallery, you will see that for years now she had been garnering rapturous coverage in the art press for spraying paint all over – not just on canvas, or steel – but on houses, trees, furniture, walls and indeed pretty much anything in sight—sometimes as part of a museum “installation” and sometimes outdoors, on exteriors as opposed to interiors. This is the sort of exercise that towers among the cognoscenti head over shoulders beyond painting on mere canvas or steel.

She has a great line of patter, too, all about how for her painting is a form of “thinking.” This shows what an intellectual she is. Another quality she shares with Saint Marcel.

THE BEAUTIFUL AT BERRY CAMPBELL

I suppose I shouldn’t have let fly at Grosse—if only because this probably means that all the people who dote on her work will reciprocate by dumping on the artists I admire (this at least is what happened with Clement Greenberg).

But – if any of my undecided readers can look beyond what I’ve just said and forgive me -- I would recommend “Dan Christensen: Late Calligraphic Stains” (though March 11).

This was an artist who was concerned with creating beauty, and he achieves it in quite a number of the 18 paintings in this show. Everything in the show was done between 1998 and 2005.

Although he was only in his late 50s and early 60s when he made them, he was to die prematurely in 2007 of polymyositis, a muscle disease, so in a sense these paintings represent his final testament.

I remember meeting Christensen in 1969, when I was still on Time. The occasion was a story I was writing about him and a show he was having; I was invited to the loft party being given by Larry Poons following the opening. At that party, I danced with Greenberg, and then sat on the sidelines with Kenneth Noland while Greenberg danced with Noland’s then wife, Stephanie.

Noland told me how offended Stephanie had been because in the story we’d done on him, earlier in the year, we’d described her as “svelte” (my editor’s word, not mine).

True, it must be said that I never saw that much of Greenberg myself, and that the four paintings by Christensen in the Greenberg collection at the Portland Art Museum date from the 1970s and 1980s. Moreover, I know that Greenberg never accepted paintings from artists whom he didn't think highly of.

However, I still feel it less likely that it was in 1990 that Greenberg said, “Dan Christensen is one of the painters on whom the course of American art depends,” as the brochure for the current exhibition claims--giving as its source a catalogue (or brochure) published by another gallery in East Hampton in 1990.

Though I would certainly welcome further illumination on this point, as matters now stand I consider it quite possible that Greenberg had made this statement earlier, and that it only belatedly found its way into print. I think Berry Campbell was closer to the mark in its press release dated November 13, 2014, when it announced that it had begun to represent the Christensen Estate. This press release says, “During his early career, Christensen’s art was championed by important critics of his time, notably Clement Greenberg….”

That said, these “late calligraphic stains” are some of them very appealing—possibly because they are so direct, so sincere, so totally without bombast or the desire to create a “sensation.” All they aim to do is give pleasure—and for me at least a number succeed in this seemingly modest and yet so difficult ambition.

Finally, and most impressively, there are what I call the “Slinky” paintings, with vertical coils of these white lines, packed with energy and emotion. The show has two smaller examples of these, “Untitled” (2002) and “Finititty (2002), but the best is also the biggest, “Laredo” (2001).