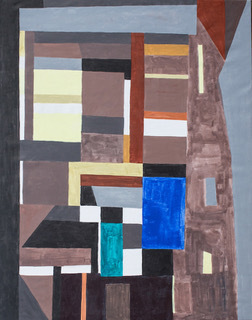 Atta Kwami, "Thami Mnyele II," 2016. Courtesy Howard Scott Gallery
Although I didn’t review every show that Howard Scott staged in his eponymous Chelsea gallery, I did stop by to look at the work he displayed more often. Scott’s taste was usually purer and more minimal than mine, but the gallery as a whole was a class act. This was particularly true with its final presentation—a show called: “Thami,” featuring the powerfully colorful geometric abstractions of a Ghanaian artist named Atta Kwami (closed March 18).

Scott first opened his gallery in 1983, in the East Village, where he called it “M13.” Moving next to SoHo, and then 16 years ago to Chelsea, he changed its name along the way, and built up a stable of more than 20 artists. Most are painters although a few are collagists and I think I may have seen occasional three-dimensional work.

All of it was of the finest, most professional quality, and this was especially true of his last show, which closed today. I’m really sorry I didn’t get to the gallery earlier, but the first day I was able to go, after Roberta Smith in the NY Times for March 10 advised me of this closing, was last Tuesday, March 14, and a snowstorm threatened to tie up the city, so that all of us were urged to stay in and not clutter up the streets. After that, other commitments intervened for the balance of the week.

Anyway, Kwami was born in Accra, the capital of Ghana, in 1956. He studied both in Ghana and the UK, and has exhibited widely in Europe, Africa and the USA. The paintings in this show are predominantly narrow strips of color, but with some rectangles, broader bands of color and occasional triangles or irregular shapes.

On the one hand, I somehow found myself thinking of Synthetic Cubism, and particularly the “Three Musicians” of Picasso (both versions done in 1921). There is that same lively brilliance of juggled shapes, and at the same time a feeling for black.

In the Picassos, the blacks become part of the solid background; with Kwami, a kind of semi-transparent black shade or scrim descends over portions of some images. Together with a generous use of grays, blacks and brown, the effect is to make these paintings look more like building blocks and urban vistas than gardens of the beyond.

According to Scott, the show is titled “Thami” in an homage to Thami Mnyele (1948-1985), a South African artist whom Kwami admires, and whose name has been given to the Thami Mnyele Foundation studio in Amsterdam. There Thami made a number of the paintings in this show. A statement by the artist, reprinted in the press release, explains that these paintings “embody the rhythms and spatial dialogues that excite me when I experience the drama of city architecture.”

He continues, “More recently in Ghana, I have been looking anew at vernacular roof-tops, at their geometry and simplicity which say so much about the aesthetics of the region; its geometry and its abstractions.” So I didn’t imagine those urban vistas! As with so much first-class abstract art, a multitude of ideas communicate themselves..