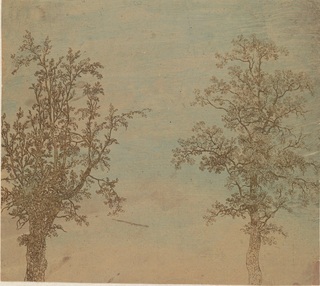 Born in Haarlem around 1589, Segers received his artistic training in Amsterdam, then initially returned to Haarlem to practice painting and printmaking. A few years later, this Dutch artist of the quintessentially baroque era resettled in Amsterdam, where he married well, bought a house and attracted fans (most notably Rembrandt, who owned eight of his paintings and a printing plate).

In later life (again like Rembrandt) Segers faced financial difficulties. He eventually relocated to The Hague, where he died sometime between 1633 and 1638.

Though Rembrandt wasn’t alone in his day for admiring Segers paintings, it’s the Segers prints that are primarily responsible for his posthumous reputation. And the current show, organized by Nadine M. Orenstein, of the Met’s Department of Prints and Drawings, is mostly about the prints.

Although it does include about a half-dozen paintings, there are many more prints -- about a hundred, in fact.

Technically, these prints – virtually all of them different kinds of etchings--are full of advanced methods, some of which still bewilder specialists, but to ignorant laymen like me, their principal charm lies in their spooky imagery.

Their fantastic mountains, vast plains, wandering rivers, weirdly-shaped rocks and wispy trees dripping what looks like moss take off from reality in the most extraordinary ways. And yet, these prints are not that easy to see.

At first, they may appear faint and yes, even dull – cloaked as they are in the dimness of three gallery spaces whose lighting has been reduced in order to protect all these fragile pieces of paper. It’s really only after your eyes get used to the murk that you will be able to fully appreciate these prints, with their super-subtle gradations of color and yes, even form.

This I discovered when I attended the media preview, and followed Dr. Orenstein’s presentation from the beginning of the show to the end. The beginning is reached if you turn to the right when you enter the exhibition and start with Segers’ earliest work.

But I would recommend turning to the left, starting with his latest work, and then moving gradually through the art of his middle period (in the middle space) before turning to the earliest work.

Take my word for it: the early work works best if you work up to it gradually.

Then you may be able to graduate to the three versions of “Mountain Valley with Fenced Fields” (also c. 1625-30), and see how these three versions evolve, again super-subtly, with one suggesting morning, another dusk, and the third, the same scene at night.