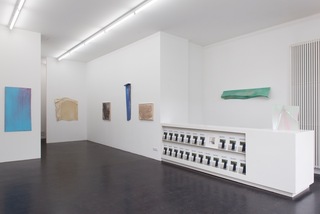 A review by David Evison

Ken Noland once said to me when talking about younger painters, "They are not coming up with anything new ". John Griefen is not exactly younger generation, but he certainly is coming up with something new. And this is made clear and beyond doubt with his plexiglass paintings at Galerie Born Berlin (until 10 June).

In his brief catalogue introduction, Griefen writes about his teacher and friend the late Jules Olitski and of his extraordinary sensitivity to the surface of a painting. Both were involved decades ago with using plexiglass as a support for acrylic paint and both returned to using canvas. Griefen is vague about their motives, but insists he was first!

The newest work at Born brought to mind an unusually shaped and singular Olitski which used to hang in Clement Greenberg’s Manhattan apartment. I dismissed it at first, but two years later on seeing it in bright sunlight, it came alive as a very new, magical and beautiful painting.

Checking the Internet I saw that it was sold at Christies NY 11.5.16. It is titled “Magdalen Series 17” and was reproduced horizontally when it should be vertical, as it is in Kenworth Moffett’s 1981 monograph about Olitski.

It is the forerunner of Griefen’s latest work, not that he had it in mind, but as he has been working for many years in the vein that Olitski opened up , he has inevitably arrived at what Olitski found and what Greenberg saw.

His last show at Born had unusually shaped works using one gradated dominant color on Büttenpapier (handmade paper), and hanging on the wall vertically or horizontally orientated.

They belong more to the category of relief sculpture where the shape and forms of the paper are more important than the color. But they caused him to return to plexiglass using similar but not so dramatic shapes, with undulating forms achieved by heating and bending before painting begins.

Plastic is smooth unlike canvas or paper, which suits Griefen’s painting methods and the use of large brushes. They retain the striations of thick and thin paint and the clear support is also given breathing space. They tease the eye into wondering if this can really be art in the tradition of western easel painting.

Although the title of this show is “John A. Griefen: In Time 1977-2017,” it is not a retrospective in the usual sense, but earlier works from the 1970s are abundant. They are paintings using acrylic on canvas and of regular format. Often using very little paint and scraping the studio floor to find forms and surface texture, they also ask us to believe that this can be art.

Doubtless they are included to put the latest in context, but I wanted to see more of the new paintings and I did not respond positively to the freestanding 'sculptures', wanting to see more attention to the form and more transparency as in the smallest object displayed at eye level.

Griefen’s paintings show a way forward for the art and tradition of painting, where shape and an undulating surface are the drawing and forms, and the acrylic color, which includes some of the latest available, provides mood and expression. Altogether they are simply and economically stated. They do not allude to what we know; it would not be new if they did.

Editor’s Note: “Magdalen Series 17” was not one of the 159 works in the Clement Greenberg Collection that came to the Portland Art Museum in 2000. Rather it was one of about a dozen works that Greenberg’s widow, Janice Van Horne, retained for her personal enjoyment, and that, after her death in 2015, were auctioned at Christie’s on May 11 2016 as “The Collection of Clement and Jenny Greenberg.”.

Magdalen Series - 17 is clearly marked in the artist's hand as a horizontal. That Clem chose to hang it in his home as a vertical does not change the painting into a vertical. Ken Moffett did a wonderful job with his monograph in 1980, but there are errors. In the case of this work he didn't include the full title, omitting "17" and he had the dimensions listed incorrectly, as well. I can tell you that Jules first started working with plexiglas after finding a broken plexi sign on the road during a bike ride in Florida after a storm. He took pieces home with him and painted on them. That was in late 1985 or early 1986. He then set about making a series of work on plexi for the next two years, paintings and sculptures and returned to the medium in the 1990s. He created hundreds of work using plexiglas. I don't know when John did his first, so can't say if he is right in his assertion. I do congratulate him on his show and wish I could get to Germany to see it. The three dimensional paper work he was doing a few years ago was fantastic!

Greenbergs vertical hanging of "Magdelene 17" as reproduced by Moffett, is spot on. It is great art that way up but horizontally looks like a pot-boiler. Christies and yourself state that it is signed as a horizontal painting.But Greenbergs judgemant as Olitskis critic and friend should also be given due respect. Thankyou for telling us about your fathers' first and inspired use of plexi. They deserve to be better known, but recognition for that great master of American art proceeds at a snails pace.